Internment during the Second World War – Part Three: imprisonment for insurrection in the Channel Islands

This is the final blog of a series on internment, highlighting the experiences of both civilians and military personnel detained across the globe in the Second World War.

The following experience took place in the only part of the British Isles occupied by Germany during the Second World War: the Channel Islands.  The present account has been revealed from a letter dating from 1954, almost a decade after the conclusion of the War.  It was sent from Vyvyan MacLeod Ferrers, a retired HM Consul, who was 65 years old when he was incarcerated.  He was sentenced and imprisoned in France, before being moved to Germany.

Why was he interned?  Apparently, he was guilty of stirring up an insurrection.  Furthermore, he admits that he had been helping and would continue to help the ‘Resistance’.  More detail is given in a book he wrote while in prison, The Brigadier.  He refused to believe in the fall of Singapore, and repeatedly told others ‘Do not be believing them: it is all lies together’.  Therefore, he was deemed ‘a man so dangerous that the Court dare not let me run loose’.  He would not do so until VE day, when he was liberated by the US Army. 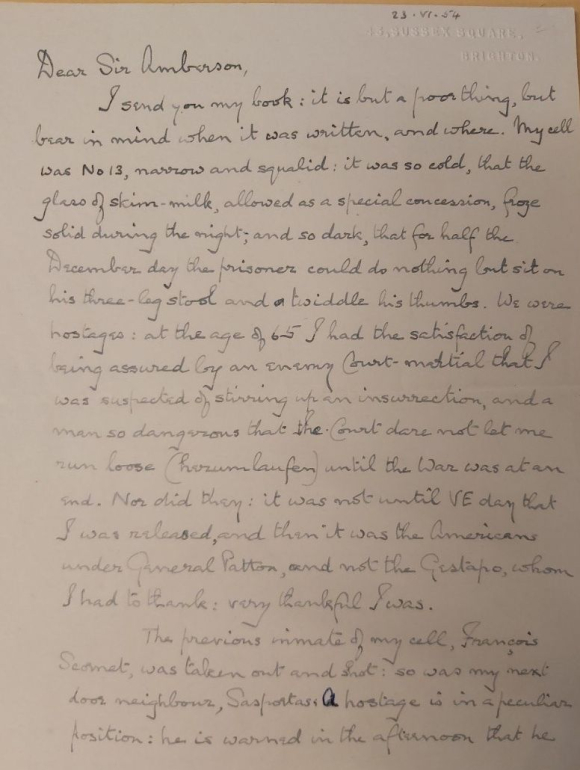 The first page of the letter from Vyvyan MacLeod Ferrers  – Add MS 89060.

Unlike other accounts which reflect on hardship in captivity, Ferrers writes little of the conditions, instead emphasising his thoughts on the German people.  He comments that the common man had little power but to go along with the machinations of the state, stating that ‘After a phase of indiscriminate indignation I found it possible to confine my resentment to the real ruffians, and to feel some sympathy with the decent man, of whom there were plenty, who could hardly do otherwise than play into their hands’.

Instead, he lays the blame firmly on the Gestapo.  Ferrers does not disguise his scorn for them, arguing that ‘The Gestapo was a stench in the nostrils of every decent man: and among the Germans there were as many decent men as anywhere else’.  He writes that the group ‘hardly concealed its contempt’ for the German courts, manned as they were by the common people.  Throughout the short four-page letter, Ferrers repeatedly emphasises how ordinary citizens were effectively powerless, ‘Called up, willy-nilly, from their own affairs, they were compelled to do what they much disliked’.  Rather than blaming them for his years of imprisonment, as many understandably would, he sympathises with them. 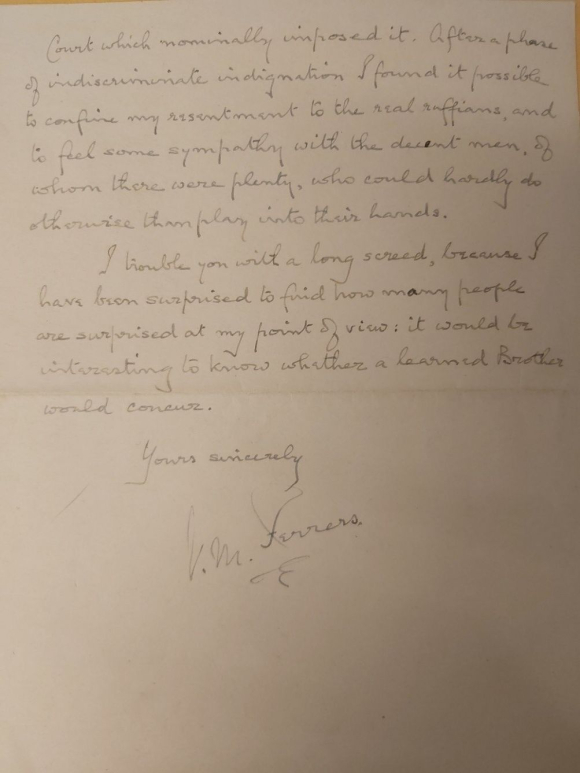 The final page of the letter from Vyvyan MacLeod Ferrers  – Add MS 89060.

This empathetic outlook (written while Britain still had rationing because of the War!) is an uncommon find.  Indeed, Ferrers finishes the letter noting how he has been ‘surprised to find how many people are surprised at my point of view’.  While recent understandings of Nazi Germany have emphasised the normality of life for the common people in the fascist regime, Ferrers already understood this, despite his experiences.  He argued that the German people were not the real enemy – but Hitler and the Gestapo.

Ferrars died less than a year after sending this letter, on 6 March 1955 in Brighton.

Jack Taylor
Doctoral researcher at the Open University.  His CHASE-funded research explores sexual violence between men in the late eighteenth and nineteenth centuries.