Have you ever wondered why animals often fight in ritualised ways, not killing each other outright even though they have the weapons to do so?  Just think of how easy it would be, with all the teeth, claws, horns and antlers.

If you currently visit the British Library’s Treasures Gallery, you’ll find a small exhibit of material from the evolutionary biologist John Maynard Smith’s archive.  In the 1970s, Maynard Smith gave one answer to the question above that proved highly influential and successful.  It even won him the Crafoord Prize, biology’s equivalent to the Nobel Prize.  And it made to number 61 of 87 in the Great British Innovation Vote, in which you were asked about ‘the most important innovation of the last 100 years’: evolutionary game theory. 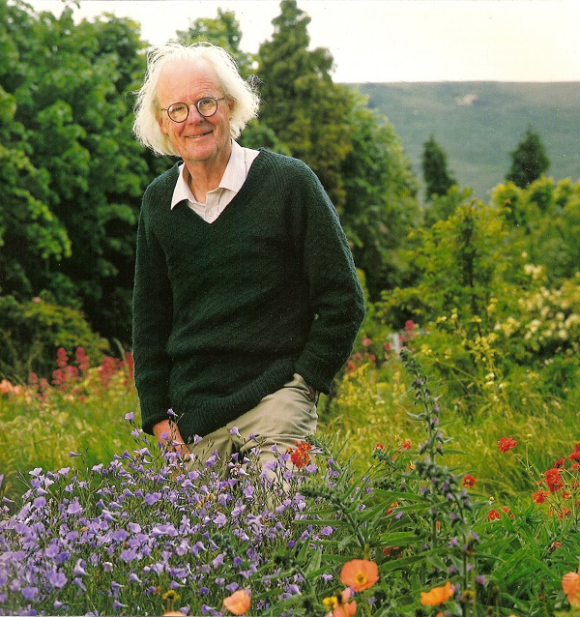 In the exhibition, next to some of his very early work on animal flight, you’ll spot some line printer output with purple annotations.  This particular printout dates from 1972 and is part of a series showing the crucial computer simulations based on which Maynard Smith and his then collaborator George Price wrote “The logic of animal conflict”.  This paper, published in 1973, is the basis for evolutionary game theory. 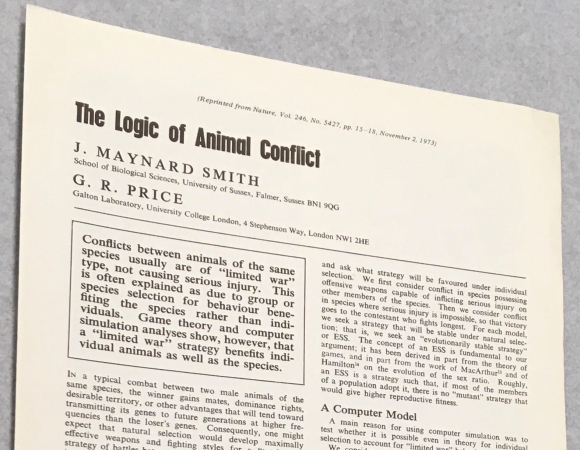 Maynard Smith’s personal copy of ‘The Logic of Animal Conflict’, 1973. Courtesy of the estate of John Maynard Smith.

Maynard Smith, born in 1920 (died in 2004), would have turned 100 this year.  He was one of Britain’s leading evolutionary biologists, a “puzzle-solver” with mathematical intuition whose research career spans almost half a century.  The exhibited printout and others of the same series were sent back and forth between Maynard Smith at the University of Sussex and Price in London.  The two of them had met in 1970 and later started collaborating on what became evolutionary game theory: the application of game theory – which originated in economics – to evolutionary biology and animal behaviour in particular.

By pitting animals against each other as in a game, supplied with strategies like “probing” and “retaliating”, Maynard Smith and Price showed why animals fight in almost ritualised ways, without full use of their weapons: because it is evolutionarily beneficial.  To underline their idea, they ran a series of computer simulations, having two “animals” A and B “fight” round after round.  A and B had the options to escalate the fight or not to.  The simulations showed that the risk of retaliation is too great: if A escalates the fight, B may follow suit and injure, even kill, A. 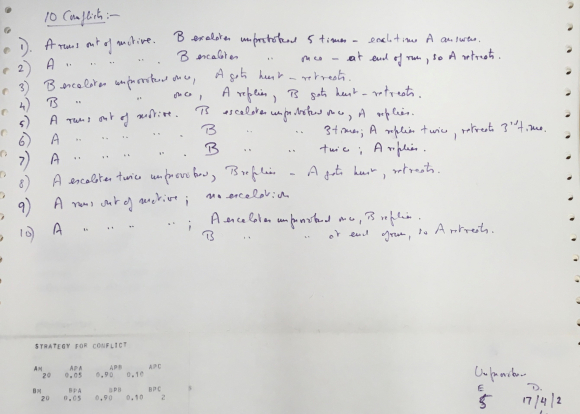 As the purple annotations on the exhibited printout show, the computer simulations were useful but not necessarily straightforward.  Some results were ‘v[ery] puzzling’.  Once everything was resolved, the results were published, stimulating much research on animal behaviour.  In 1976, evolutionary game theory joined several other ideas forming the basis of Richard Dawkins’ The Selfish Gene.  In fact, Dawkins credits Maynard Smith’s work as a ‘major stimulus that led me to […] write the whole book.’  If you would, please turn to Chapter 5, ‘Aggression: stability and the selfish machine’…

Anyway, that’s where you can read Dawkins’ description of evolutionary game theory – without any of the maths that was in the original paper of Maynard Smith and Price.

Helen Piel
Postdoctoral fellow at the Research Institute for the History of Science and Technology at the Deutsches Museum, working on the relationship between artificial intelligence and cognitive science.

The John Maynard Smith exhibition is on display at the British Library Treasures Gallery until April 5.