I have come across an intriguing 17th-century book titled Coryats Crudities, written by Thomas Coryate (1577?-1617), and illustrated with satirical prints.  Coryate (also spelt as Coryat) was an entertainer to Henry, Prince of Wales, eldest son of King James I of England (James VI of Scotland).  In 1608 he undertook a five-month journey in continental Europe, and this book, published in 1611 and dedicated to the Prince, gives a detailed account of his travels. 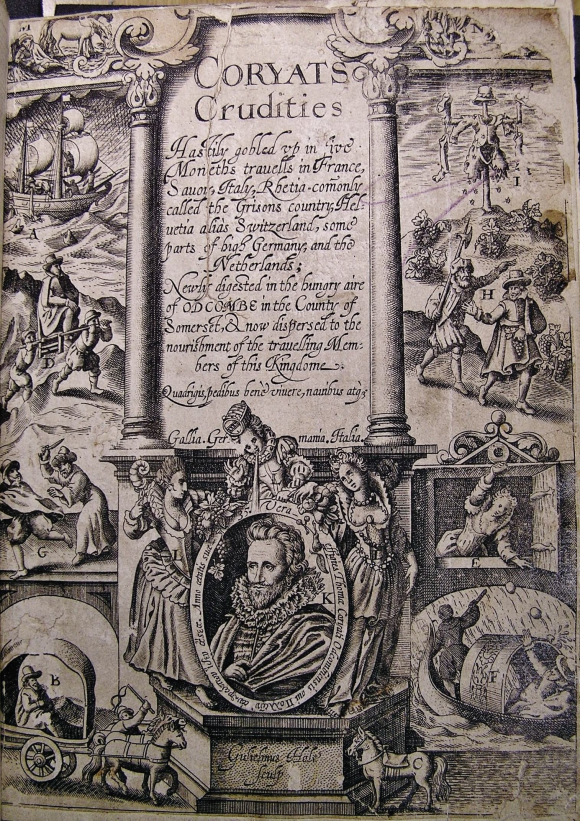 The text on the frontispiece illustration informs the reader that Coryate visited France, the Duchy of Savoy, Italy, Switzerland, Rhaetia (the canton of Graubünden, now in Switzerland), Germany and the Netherlands.  It features the author’s portrait at the age of 35, engraved by William Hole, flanked by eleven amusing images of his adventures.  These included being sick on board of a ship (top left), being carried in a chair on poles upon the shoulders of two men in the French mountains (centre left), and a Venetian courtesan hurling eggs at him from a window as he passes by in a gondola (centre right). 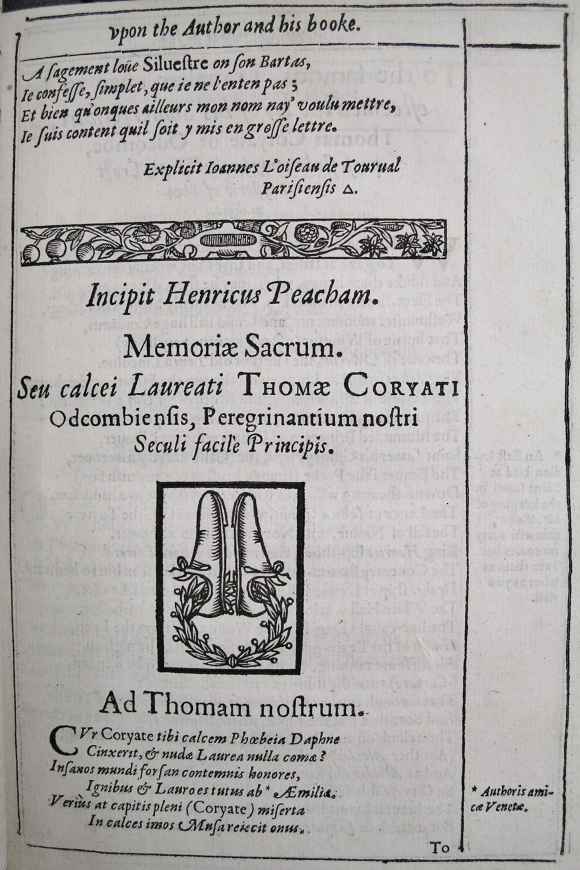 Even more unexpected is the second illustration: a pair of shoes, encircled by a laurel wreath.  Printed above and below are prose and a verse in Latin by Henry Peacham, commemorating Coryate and the iconic shoes he wore while walking for 900 miles of his 1,975-mile journey across Europe.  This type of ‘lachet’ shoe had two leather tongues with holes in them for shoelaces.  Coryat’s shoes were strengthened with pieces of horn, and he tells us in the book that he had them mended only once - in Zurich.  Humorous verses, printed at the start of the volume and written by numerous authors in response to Coryate’s request, mention his shoes 32 times!

After returning to his beloved home village, Odcombe in Somerset, Coryate asked for permission to display his shoes inside the local Church of St Peter and St Paul, as a sort of thanksgiving for his safe trip.  They hung there until 1702, went lost in the 1860s, but have been replaced by a replica pair, carved in stone.

The ‘Odcombian Legge-stretcher’ (as he referred to himself) embarked on further travels in 1612, spending time in Turkey and the Holy Land.  In 1615 he travelled from Aleppo in Syria to India, walking over 3000 miles.  He kept recording his experiences during these journeys, periodically sending back manuscript notes to England.  He died of dysentery in Surat, Gujarat, India, in December 1617.  His surviving notes were published, providing a unique insight into the lives of people in these countries through the eyes of an early English traveller.

Further reading
Frederic George Stephens, Catalogue of Prints and Drawings in the British Museum. Division I. Political and Personal Satires. Vol. I. The Trustees, 1870, Satires No.75 and 77, pp. 39-42; shelfmark 1572/628
Biographical entry for Coryate, Thomas (1577?-1617), Oxford Dictionary of National Biography.
Farah Karim-Cooper, Strangers in the city: the cosmopolitan nature of 16th-century Venice, 2016
Description of the Jewish Ghetto and the courtesans of Venice in Coryate's Crudities, 1611

Posted by India Office Records at 09:00:00 in Journeys , Rare books