Today’s Untold Lives centres on horses rather than people.  By 1800 the East India Company was increasingly reliant on its army, and suitable horses were needed.  On 2 January 1801 the Court of Directors paid Company official James Coggan £400 to purchase a stallion for the use of the Company’s stud in India.  They agreed to pay for a ‘Proper Person’ to act as a groom and accompany the horse to Bengal.  Further sums were authorised for the purchase of two mares a few weeks later and it was agreed to send three or four thoroughbred stallions and seven strong hunting mares to improve the breeding stock in India.

On 16 March 1801 the Court set up a Stud Committee to look into the quality of horses available for the Company in India.  Whilst Asiatic horses were suitable for the native soldiers, they were not ideal for the heavier European men.  Stronger native horses bred for the harness were too thick in the shoulder to act as a charger.  Arabian stallions were too small for Company purposes.  It was decided to set up a stud farm in England to breed the ideal blood lines to send to the stud farms in India. 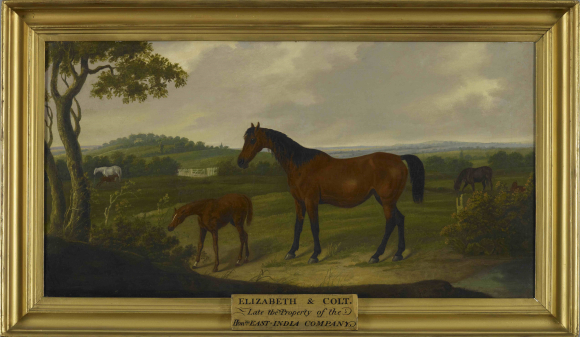 Elizabeth and colt, thoroughbreds belonging to the East India Company at its stud farm at Padnals near Romford, Essex, attributed to J Hardman  - British Library Foster 240

David Scott, Chairman of the Committee, offered to present the new venture with a fine grey Arabian stallion from his estate in Scotland.  The Court initially considered acquiring part of the Cannons estate at Little Stanmore Middlesex but this proved unsuitable.  In July 1802 agreement was reached with John Towgood to lease a farm of 130 acres at Padnals near Romford in Essex.  John H Manley was put in charge of the farm but his services were dispensed with in January 1803.  Samuel Yull was then appointed to manage the establishment as resident groom.  The Company’s equine shipping agent, William Moorcroft, a respected veterinary expert, was appointed Superintendent of the Stud a few months later. 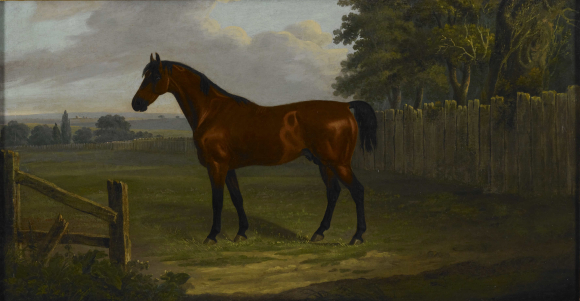 Worthy a thoroughbred stallion belonging to the East India Company at its stud farm at Padnals near Romford, Essex, attributed to J Hardman - British Library Foster 239. Worthy’s brother Waxy won the Derby in 1793.

The stud farm was a success. Some income was obtained from hiring out the services of the Company’s two stallions. The accounts at 25 March 1806 show nearly £440 was made from the stallions performing their duty with mares brought in to them in that season.

From 1801 to March 1809, the horses sent to India were: 7 stallions, 6 mares, 26 colts, and 7 fillies.  In August 1804 a special stable was constructed on the upper deck of the ship Lord Keith for a prize stallion.  The Company directors were dismayed when ‘young Comus, one of the most valuable horses that could be procured in this country for the purpose of improving the breed in India’ was lost by carelessness when being transferred to a country ship soon after his arrival at Bombay.

There were concerns about inadequate management of the stud farm at Pusa in Bengal, so William Moorcroft sailed to India late in 1807 to superintend affairs.  It appears that Padnals was maintained by the Company until 1817 when Samuel Yull was given a pension of £80 per annum, and William Holmes, who had care of the colts, £40 per annum. Assistant groom James Craggs returned to his job as labourer in the Company tea warehouses with a pension of 5s per week.  After Yull’s death in 1824, his widow Olivia continued to receive half his pension.