The National Indian Association and its handbook for students in Britain

The National Indian Association was founded in Bristol in 1871 by Mary Carpenter.  Local branches were established in both England and India. Its aims were to extend knowledge of India and its people in England; to co-operate with efforts for advancing education and social reform in India; and to promote friendly relations between English and Indian people.

The Association published a monthly magazine; organised lectures; made educational grants; encouraged the employment of medical women in India; and gave information and advice to Indians in England.  The Committee of the Association also assisted Indian parents wanting to give their sons ‘the benefit of an English Education’ by offering superintendence of students, with expenses arranged individually for each case.  In all matters, ‘the principle of non-interference in religion is strictly maintained’. 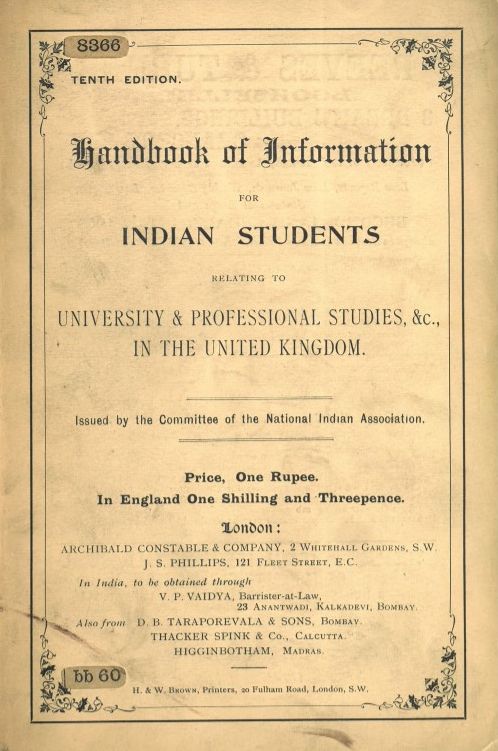 The Association published A handbook of information for Indian students relating to University and Professional Studies &c in the United Kingdom which ran to several editions.   It provided details of legal study; examinations connected with government service; universities and colleges; medical study; and technical training and manufactures.

The 10th edition was published in 1904.  It offered general advice to those young men coming to England to study.  By practising ‘great economy’, a student could live in London in £120 to £150 a year.  Living expenses were cheaper in other cities.  Different kinds of accommodation were explained: rented rooms; boarding houses where meals were provided; or living with a family which had the benefit of gaining ‘acquaintance with English life and habits’.

As well as living expenses, the students had to pay educational or professional tuition fees and spend considerable amounts on books.  Candidates for the Indian Civil Service were likely to need £30 or £40 for books.

Indian students were warned that they would not be able to maintain themselves to any degree by teaching languages or other subjects.  After paying for the voyage, they were advised to bring at least another £20 or £30 from India for buying clothing and other essential items on arrival in England.  The Association said that it was inadvisable to buy articles of dress in India for use in England.

It wasn’t thought necessary for students to be met on landing. The shipping agents would look after baggage, and students coming all the way by sea could take a train from the Albert Docks to Fenchurch Street Station and then a cab to their destination.  It was equally easy to arrive at Charing Cross Station from Brindisi.  However it was important to inform a friend in London by letter or telegram of the expected date of arrival.

A resolution of the Government of India was quoted which stated that Indian students travelling to England should apply for a Certificate of Identity signed by the head of school or college, and counter-signed by a District Officer, Commissioner of Police, or Political Officer.  The certificate proved that the holder was a British subject and could be used to obtain a passport for travel to foreign countries.  It also allowed for speedier processing of appeals for assistance from students unable to complete their course ‘owing to embarrassed circumstances’.