Papers at the British Library shed light on the belief in witchcraft in 19th-century India.  The India Office Records contain a wealth of correspondence and reports about the processes for discovering witches and the brutal techniques used to determine guilt or innocence.  The proceedings of criminal trials offer a unique insight into attempts by the British administrators to stamp out these practices. 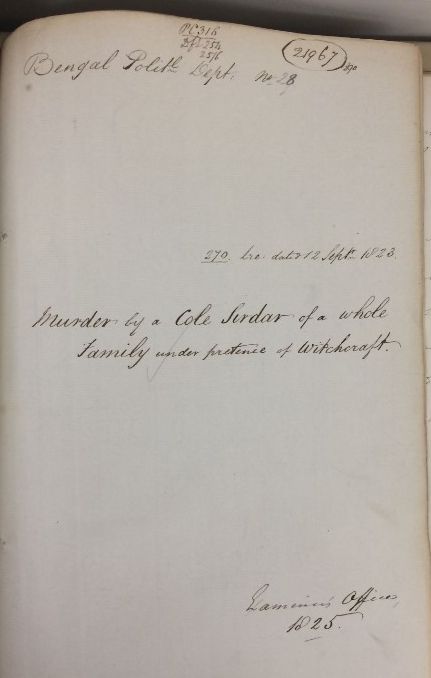 Commonly, villagers sought advice from a local witch hunter, or Bhopa, who would identify the witch. The favoured punishment was witch swinging. One report offered the following description:
‘Without trial or being heard in defence, the supposed witch is seized, her eyes stuffed with red chillies and bandaged and ropes are tied firmly round her legs and waist.  She is then taken to a tree and swung violently, with her head downwards …till she confesses to a falsehood or dies under the barbarous infliction’.

In 1842, a woman in Palachpoor was murdered in the jungle close to her village by her stepson. When cross examined, he claimed she had been practising witchcraft and had ‘eaten two buffaloes of mine and 10 persons of the village, including my brother’s wife and sister’s daughter’.  The victim’s daughter admitted her mother had been a witch, announcing ‘she used to bite people and they died in consequence’.  It emerged the unfortunate woman had reported her stepson’s involvement in a robbery.  In his fury, he forced her into the jungle and beat her to death.  Despite this knowledge, the witchcraft accusation meant a short prison sentence and hard labour was agreed upon as punishment.

In the village of Chapra in 1849, a woman called Eullal was accused of witchcraft.  It was claimed her eye had fallen upon a villager who contracted an illness and died eleven days later.  A gathering of village officials concluded Eullal was guilty.  Once they had agreed to distribute her possessions and properties amongst themselves, Eullal was seized and charged.   She had chili paste rubbed into her eyes and bandages applied to prevent her evil glare afflicting further victims.  Eullal survived this ordeal and was tied to a tree at 6pm.  By 9pm she was dead.   It was argued a slave killed Eullal under the instruction of the Thakore.  A punishment of 25 Rupees was suggested by the Raja. 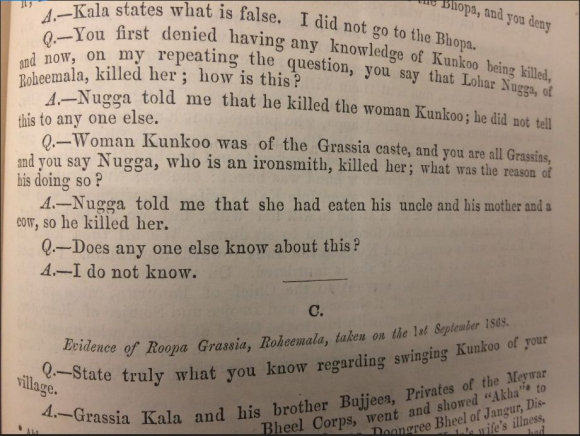 IOR/L/PS/6/567, Coll 240 Papers regarding a case of 'witch-swinging' and murder which took place at the village of Rohimala, Udaipur State

In 1868, a Bhopa accused an elderly lady, Kunkoo, of making a soldier’s wife sick.  Villagers seized Kunkoo, forced her hands into boiling oil and swung her for days.  The soldier’s wife died and the old lady was released, only to be murdered shortly afterwards.  During questioning the soldier denied killing Kunkoo, exclaiming ‘Nugga told me that she had eaten his uncle and his mother and a cow, so he killed her’.

These and other cases were reported by British authorities.  Captain John Brooke wrote in 1856: ‘I would remark that there is little hope of the custom ceasing till it becomes dangerous to follow the profession of Bhopa’.  The reports indicate the government was keen to stamp out the practice, but were wary of interfering with indigenous beliefs and traditions.  Local leaders admitted that in some areas 40-50 women a year could be punished as witches. The response was to target Bhopas.  By convicting ‘professed sorcerers’ and fining community leaders, the authorities hoped to quell the torture and murders.