'The season of Easter is a "commonwealth" of festivity', said Aris's Birmingham Gazette on Monday 21 April 1851. 'It is particularly interesting at this season of the year to notice the various preparations for public recreation and amusement.  Hoardings are placarded with immense posters, calling attention in colossal characters, to excursion trains, steam vessels, concerts, theatres, fairs, and numerous other sources of enjoyment, and wherever we look we can discover indications of the "first Spring holiday".'

Historical printed playbills are a fascinating resource for examining how generations past were entertained.   They have great visual appeal, designed to catch attention.  Perhaps the Birmingham newspaper reporter saw this very playbill advertising grand entertainments for the Easter Holidays at the Theatre Royal in April 1851?

The bill’s 'colossal characters', its large bold type, quite literally evokes the host of performers lined up in a series of novelties for the local stage.

A great and surprising variety of entertainments appeared on Victorian stages across the country.  ‘Traditional’ theatre is certainly represented here with the great eastern romance of Sinbad from The Arabian Nights and the historical drama, Shakespeare’s Early Days (Shakespeare pageants and tribute plays were common around the country especially near his birthday at the end of April).  But the novelty and variety of the mixed bill is noteworthy.  Performing animals were a big hit and this bill announces the treats in store from Monsieur Desarais’ 'Troupe of Histrionic Dogs and Monkeys'! 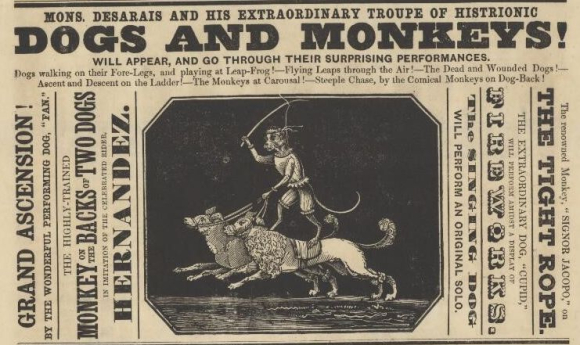 Mons. Desarais’ Extraordinary Troupe of Histrionic Dogs And Monkeys. From a playbill on 29 April 1851.  Theatre-goers could see dogs walking on their forelegs; climbing up and down ladders; monkey ‘carousals’(?!), dogs playing dead and wounded (?!); and monkeys on backs of dogs in a grand steeple-chase! “the singing dog” will 'perform an original solo' (?!!!) and a dog called 'Cupid' performs amidst a display of fireworks (?!). British Library shelfmark Playbills 199 (Image sourced from Trove, National Library of Australia)

In addition to large, bold and playful type fonts, playbills often used illustrations to draw in peoples’ attention.  This playbill shows the acrobatics of the funambulist ‘Young Hengler’, a rope dancer who thrilled audiences 'by discharging a brace of pistols whilst accomplishing a lofty aerial somersault'.  In calmer moments he would entertain with a drum polka and buffo dance with his feet in bushel baskets.

The Henglers were a large family of skilled circus performers, they became a huge company with a presence in many regional cities and in the centre of London in Argyll Street (on the site of the Palladium today).  Later in the century, Music Hall culture diminished the audiences’ taste for this type of circus act and despite more far-fetched and extreme acts at Hengler’s like 'water theatre' and human cannonballs, they went to the wall in the late 19th century. 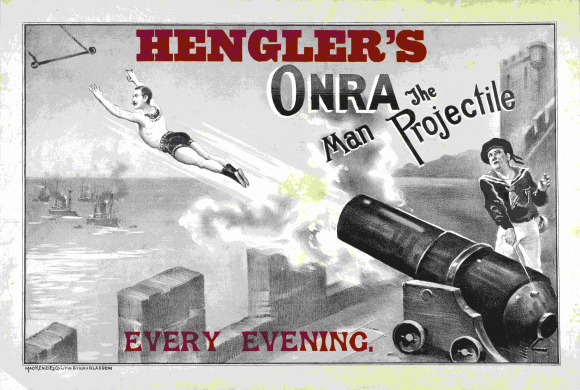 Hengler's Circus: 'Onra the man projectile'Mons. Desarais’ Extraordinary Troupe of Histrionic Dogs And Monkeys. From a playbill on 29 April 1851. . MacKenzie & Co. Litho Studio [1890].  The job of the playbill was to 'fire' excitement – after all they were competing with a 'commonwealth of festivity', excursions, concerts, fairs and other entertainments. British Library shelfmark Evan.338 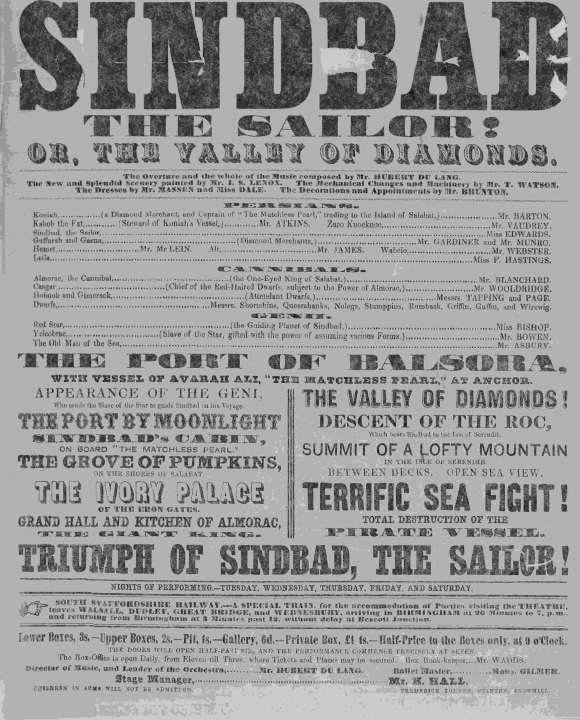 A variant Playbill from 22 April 1851 with lavish descriptions of the set, plot and cast of Sinbad the Sailor. British Library shelfmark Playbills 199 (Image sources with thanks to Sakib Supple)

There is a mass of useful incidental information for historians buried within the sensation and puff of these playbills.  Details about ticket prices; who could attend ('no babes in arms' admitted); notes on comforts such as warmth ('good fires kept'); hygiene ('thoroughly cleansed'; safety ('constables in attendance at all times') and transport – see on this bill in 1851 how people were conveyed by special trains from suburbs and outlying towns like Walsall and Dudley – a relative novelty in itself! 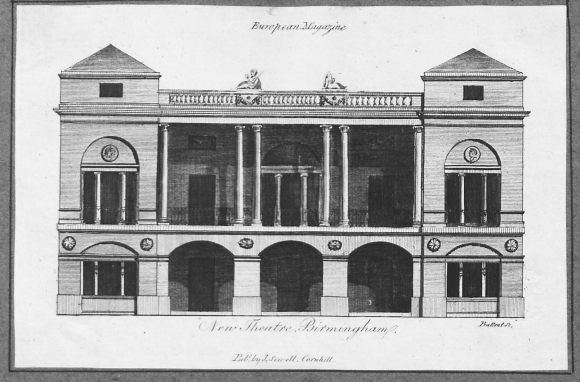 How The Theatre Royal in Birmingham would have looked around 1851, British Library Digital Store 1763.a.5

The British Library has a vast collection of historical playbills (nearly a quarter of a million) and about 100,000 of them (dating from the late 18th century to the 1860s) were digitised some years back (you can find the by tapping ‘playbills’ into Explore the British Library, clicking ‘Online’ and selecting one of the volumes with the ‘I Want This’ button to look at examples).

In an effort to make these individual bills more findable, the British Library has an ongoing project called In the Spotlight which aims to identify and record crucial details like performance titles.   The variety of font size and design means they cannot be machine read.  The playbills project is a great way for members of the public to get their noses into interesting and entertaining historical print and help identify and transcribe information that will provide access points for future research.  The results are integrated into the Library’s online viewer and all data is available for anyone to use in their own work as it’s completed.

The interactive project can also generate thoughtful discussion on social media (@Libcrowds and @blprintheritage) and on the project discussion board. For us, this popular engagement with historical contexts is as valuable and exciting as the data generated.