Expired through eating some unwholesome food

‘Expired ...through eating some unwholesome food’ - this is how the death of Colonel Alexander Bagot, Commandant of the 38th Native Infantry was reported in the British and Indian newspapers following his death on 20 October 1874. The Colonel was on a tiger hunting expedition and had set up camp near Buxar when the accident occurred.  His cook had apparently mistaken taken arsenic used to cure the animal skins instead of baking powder and had included it in the breakfast chapatis.  The Colonel’s death is officially recorded as accidental poisoning.

Obituary of Colonel Alexander Bagot: Homeward Mail from India, China and the East, Monday 9 November 1874 - British Newspaper Archive which can also be accessed via findmypast

Colonel Bagot was known for his love of big game hunting and was considered to be one of the best shots and finest hunters of his day.  He had however previously had some near misses whilst hunting.  The Shrewsbury Chronicle of 17 April 1868 gives an account of one of such accident which occurred while tiger hunting on 28 March:
‘Colonel Alexander Bagot and Lord Downe were hunting a tigress in jungle near Nagode.  Colonel Bagot had been taking aim when the tigress sprang at them knocking them both and a Shikarrie over.  The tigress seized the colonel by the leg below the knee, tearing his trousers with her claws and he received a severe blow to the head from contact with a stone. A Ghurka sepoy with a spare gun, shot the tigress who released the Colonel and was preparing to spring again when she died.  No-one was seriously hurt in the incident’.

Big game hunting wasn’t the only sport Bagot was fond of.  The Weekly Chronicle (London) contains a report of his arrest on 6 June 1848, along with several other military officers, at the Cocoa Tree Club in St James’s, a known gambling house.  The case was dismissed owing to lack of evidence as it could not be proved the officers were at the Club to gamble. 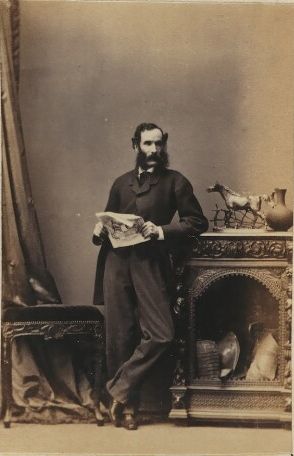 Alexander Bagot was born on 10 June 1822, son of Sir Charles Bagot, G.C.B. and Lady Mary Charlotte Anne Wellesley, eldest daughter of William, 4th Earl of Mornington.  He was educated at Westminster School and Charterhouse School and entered the East India Company’s service as a Bengal Cadet in 1840.  He was posted to the 15th Bengal Native Infantry on 9 January 1841, rising to Brevet Lieutenant-Colonel and serving with them until 1865.   His time serving in the 15th Native Infantry was alongside Harry Larkins, who features in another Untold Lives blog post.

In 1850 the Nusseree Rifle Battalion was raised and Bagot was served as its Commandant until May 1861 when it was disbanded.  In June 1865 he was appointed Commandant of the 38th Bengal Native Infantry and remained so until his death in 1874, rising to the rank of Colonel.  He was a member of the Masonic Lodge Himalayan Brotherhood, No. 459.

The Weekly Chronicle (London) 18 June 1848 and Shrewsbury Chronicle, 17 April 1868 -  British Newspaper Archive which can also be accessed via findmypast.