In 1630 the East India Company kept back £3 from the wages of Brute Gread, carpenter of the ship London on a voyage to Bantam.  The stoppage was to pay for a copper kettle which Gread was said to have removed from the ship.  Gread’s wife Dorothy petitioned for repayment because the kettle brought ashore was defective with a burnt-out bottom, and it was cut into pieces and used to sheath Mr Muschamp’s wooden leg.  The Company ordered that the money be repaid.

George Muschamp was a Company merchant who had lost his right leg in July 1619 on board the Sampson in a fight with the Dutch at Patani in the East Indies.  The leg was shot off by a cannon and he spent four months in ‘miserable torture’ for want of medicines.  However this terrible injury did not stop Muschamp having a long career with the Company.

Muschamp’s first petition for employment in the Company was considered by the Court on 4 August 1615.  He outlined his career to date: four years in Antwerp and Middleburgh, ’brought up in marchandize’ eight years.  Muschamp could speak Dutch and French and said he was skilled in silk, silk wares and linen cloth, and in keeping accounts.  He had recently been employed by Duncombe Halsey, a City of London mercer.  After his ‘sufficiency and carriage’ were examined, he was engaged in September.

The East India Company sent Muschamp to the spice islands in Southeast Asia.  He moved around, serving at Batavia and Amboyna.  In 1623 the council at Batavia accepted his request to leave because his ‘want of one leg’ was preventing him from performing his services as he would wish.  They reported that Muschamp was a ‘very sufficient merchant and has been faithful, honest and careful’.

The city of Batavia from An embassy from the East-India Company of the United Provinces, to the Grand Tartar Cham Emperour of China (London, 1669), shelfmark X.1202 Images Online

Muschamp arrived back in England in the Palsgrave in June 1623.  In October he was given a gratuity of £100 on account of his good reputation and loss of his leg.  He then negotiated terms with the Company for a second voyage.   Although he wanted a salary of £250 per annum, he accepted an offer of £150.  Musgrave asked to be employed at Surat, mainly for health reasons, but was sent back to Southeast Asia.  He was President at Bantam from 1629 to 1630.

In a letter dated 9 March 1630, the East India Company ordered Muschamp to return to England because of his ‘great abuse’ of private trade.  The Company seized his assets and in 1631 exhibited two bills in Chancery against him and two others.   A fine of £200 was subsequently imposed on Muschamp.

However in 1639 Muschamp was appointed President at Bantam for a second term.  In December 1640 his wife Mary asked for permission to join her husband.  The Company refused, partly because of the cost, but also because such a licence had never yet been granted and they thought it would be an ‘ill precedent’.  She was advised to be patient until the end of her husband’s contracted time, otherwise they could order his return by the next ships.

Then news arrived that Muschamp had died in the spring of 1640.  Mary Muschamp petitioned for help as she had small five children.  On 9 March 1642 the Company’s General Court of Proprietors granted her £250 to relieve her ‘miserable and comfortless state’. 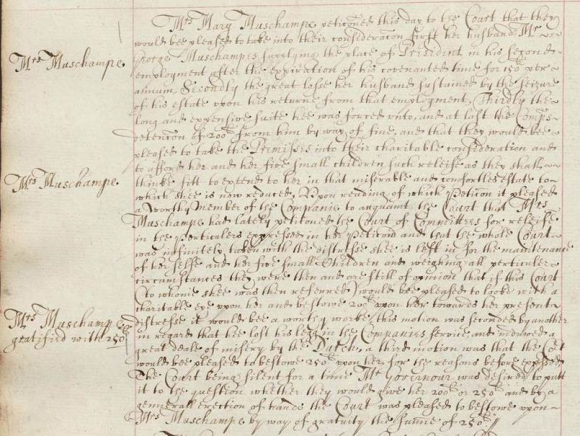 Further reading:
East India Company Court of Director's Minutes IOR/B.
George Muschamp's correspondence can be found in IOR/E/3  and IOR/G/40/25(4) - the letters are listed in Explore Archives and Manuscripts.

IOR/B and IOR/G are available as a digital resource from Adam Matthew Digital which is free to access in British Library Reading Rooms (all British Library buildings are closed at present).