The 1901 UK census was taken on 1 April for people living at midnight on Sunday 31 March.  The fact that it fell on April Fools' Day did not escape the newspapers who published reminders that there were penalties for people who played tricks.  Any person wilfully giving false information was liable to a fine not exceeding £5. 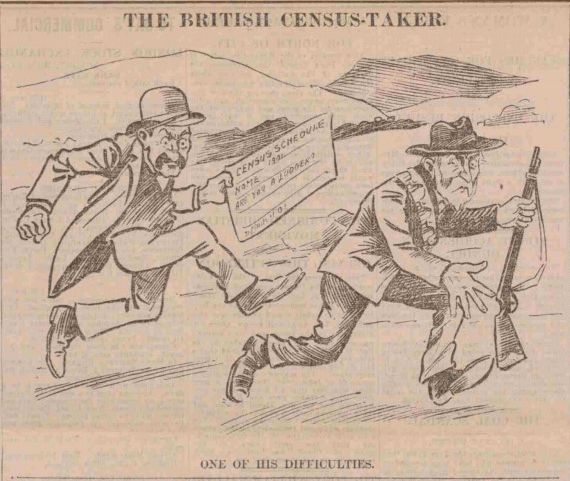 The government appointed 50,000 enumerators, male and female.  Each received a fee of one guinea, with an extra payment of 3s 6d for every 100 people enumerated above the first 400.  The average responsibility of an enumerator was 300 families or 1500 people.

The enumerators left a schedule at every house or tenement in their district during the week ending 30 March 1901.  They took a note of the name of every person who received a schedule and of all uninhabited buildings.  Householders were assured that ‘strict care will be taken that the returns are not used for the gratification of curiosity’.

Each head of household had to fill in ten columns of information.
(1) The names of all occupants, listed in a set order where applicable – head, wife, children, other relatives, visitors, boarders, servants.
(2) Relationship to the head of household.
(3) Whether married, single or widowed.
(4) Sex.
(5) Age last birthday – inaccuaracies for domestic servants were sometimes caused by their reluctance to admit their real age for fear of dismissal.
(6) Occupation – there were elaborate instructions aimed at securing precise definitions. For example, nurses had to be categorized into hospital, sick, monthly, or domestic.
(7) Employed, employee, or working on own account.
(8) Working at home or not.
(9) Place of birth.
(10) ‘Deaf, dumb, imbecile or feeble-minded, blind or lunatic’.

On 1 April, the enumerators began the long task of collecting all the schedules and giving advice on completion where necessary.  Some reported being sworn at or threatened with violence.  One enumerator in Batley Yorkshire wrote to the local newspaper about the poor district of Daw Green.  He reported his concerns after visiting a dwelling consisting of two rooms, a kitchen with a bedroom above.  There were 14 people living there from two or three families, aged between two months and 40 years. 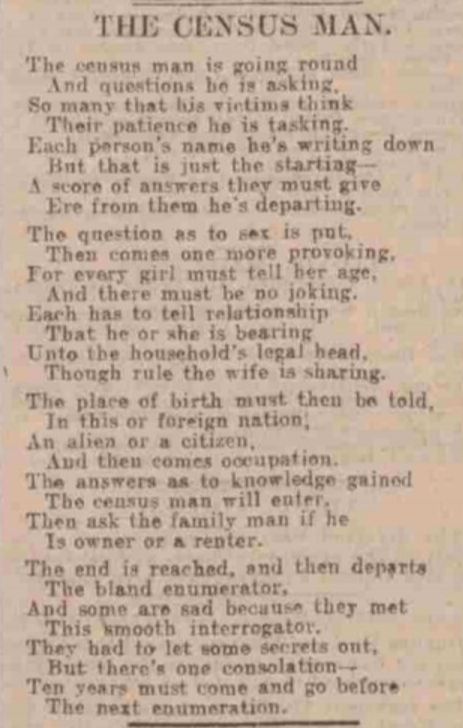 The enumerators had to copy all the details from the schedules into an enumeration book by 8 April and deliver the schedules to the local registrar.  Between 8 and 22 April the registrar checked the enumerators’ work and passed the books to the superintendent registrar who forwarded them to the Census Office in Miilbank London by 27 April.  There, 200 clerks classified the entries and made preliminary returns after a couple of months before the issue of the final volume of statistics about two years later.

Dundee tailor Heggie took the opportunity of the census to take out a advert in the local Evening Post.  He advised all men in the town who were wearing the same suit purchased from him around the time of the last census to visit his premises to be measured for a new one: ‘That the wearers of those Garments have got their money’s worth can’t be disputed’.