By the 1720s the London press was in full flow, but newspaper printing elsewhere in England was only just getting started.  The earliest provincial newspapers began in Norwich (The Norwich Post) in 1701 and Bristol (The Bristol Post Boy) in 1704.  From here the printing of newspapers gradually spread to other regions, reaching Derby in 1720.  We have recently purchased a single unrecorded issue of The Derby Post-Man dated Thursday 6 July 1721.  This small weekly newspaper also survives in three issues at Derby Central Library and a fragment at the Bodleian Library.  Not only is this newspaper the first printed in Derby, it is also one of the first examples of printing in general from Derby. 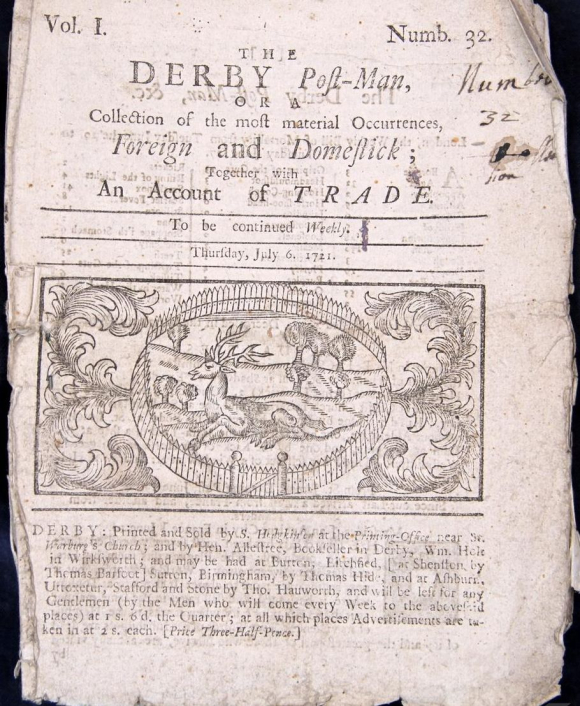 Its front page features a large woodcut of a stag lying in a fenced enclosure and below that is an elaborate imprint, revealing that The Derby Post-Man was printed and sold by Samuel Hodgkinson at the Printing-Office in Derby, but it was also sold by various agents across the region.  Copies could be obtained from Birmingham, Uttoxeter and elsewhere, demonstrating the reach of this little newspaper.

Provincial newspapers are different from modern local newspapers; they contained London news for people in other areas of the country, only printing a small amount of local news and advertisements.  This issue of The Derby Post-Man reproduces an extract from the London Weekly Bill of Mortality, mortality statistics that were printed on a weekly basis from the late 16th century.   This extract includes deaths from a variety of conditions, including the intriguingly named 'headmouldshot' and 'rising of the lights'.  ‘Headmouldshot’ described a condition in which a newborn’s skull is compressed by delivery, causing fatal brain pressure.  It still exists but is now treatable. 'Rising of the lights' is an antiquated term for croup.  The horrible cough caused by croup sounded like the children were bringing up a lung, or ‘raising their lights’. Snippets of news from St. James’s Evening Post follow, dated 29 June.  It took a week for the London newspapers to reach Hodgkinson in Derby and for him to print the stories in The Derby Post-Man.  Helpfully, the snippets of news from European cities are accompanied by a description of each place.  Marseilles is described as an ancient city in France, Parma as a rich and populous city in Italy and Hamburg a strong city in Denmark.  Handwritten news was another way in which news spread across the country.  It was seen as more up-to-date and reliable than printed news and provincial newspapers often extracted stories from manuscript newsletters.  This issue of The Derby Post-Man contains political news from 'Jackson’s letter'.

This issue of The Derby Post-Man also contains a poem about the South Sea Bubble written by 'a Lady'.  The South Sea Bubble was a period of speculation that ruined many British investors in 1720.   This poem is called 'Upon a lady’s being offered a purse by one of the late Directors of the South-Sea Company' and it is a scathing criticism of the South Sea Company.  It is precious evidence of a woman contributing to a newspaper during this period.  The poem is unrecorded elsewhere and would have been lost if this issue of The Derby Post-Man hadn’t survived.