The rocky beginnings of Eddystone Lighthouse

Perched on the treacherous Eddystone Rocks 20 kilometres off Plymouth stands a lighthouse, the fourth to be built there. This extraordinary print measuring one metre is an etching of the first lighthouse by its designer, engineer Henry Winstanley. 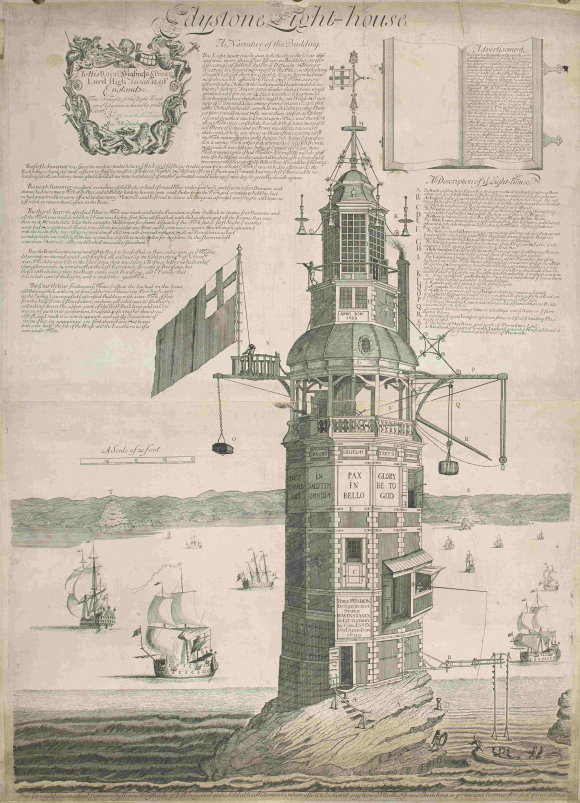 Winstanley (c.1644-1703), of Littlebury near Saffron Walden, had shares in a ship which, like many others, was wrecked on these rocks. He submitted to London’s Trinity House a design for the first offshore lighthouse in the world. It was accepted and supported by the Admiralty – hence the dedication to the Lord High Admiral of England in the allegorical cartouche at top left.

Next to it is the fascinating history of building the lighthouse between 1696 and 1699. Work could only progress during summer, and even then was often halted for weeks because of storm-force winds and waves up to 200 feet high. The builders were often stranded and nearly ran out of provisions on several occasions. At this time the Nine Years’ War was being waged, and the description omits an incident from 1697 when the crew of a French privateer vessel destroyed what had been built of the lighthouse, captured Winstanley and his companions, and transported them to France. They were later released by the orders of King Louis XIV, who announced: ‘We are at war with England, not with humanity’.

Text in an open book at top right provides navigational information for ships. The key underneath describes various parts of the building. Galleries were used to retrieve goods from boats below by using cranes, and for signalling to ships. A bedroom/dining room above the kitchen in the cupola contained lockers for storing candles. Inside the lantern a large hanging lamp and sixty additional burning candles provided the light. On the outside, there were wooden ornamental candlesticks on iron supports, and Winstanley recommended propping ladders against them when cleaning the windows! He even thought of including a chute for rolling stones at intruders to defend the landing place.

According to the inscription at the bottom of the sheet, Winstanley sold the print and showed a model of his lighthouse to visitors at his ‘Waterworks’ – a Water Theatre at Piccadilly he invented for the entertainment of a paying public, with water displays and fireworks. 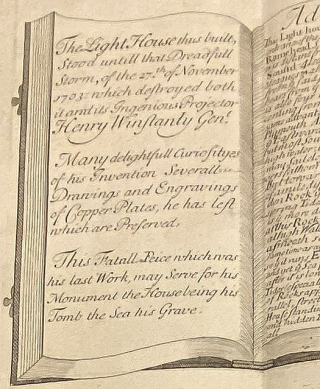 A later version of the print was published in the Supplement volume of Nouveau Theatre de la Grande Bretagne (1728). Here the previously blank leaf of the book at top right carries an inscription, telling us that the lighthouse was destroyed in a storm on 27 November 1703. Winstanley, who was supervising repairs on the structure, was swept away by the sea and never found.

Volume IV of Nouveau Theatre contains a print of the second Eddystone lighthouse, designed by John Rudyerd and completed in 1709. This lighthouse also came to a sad end: it was destroyed by fire on 2 December 1755. One of the three lighthouse keepers, Henry Hall aged 94, died from ingesting molten lead from the burning roof of the lantern.

John Smeaton’s third lighthouse from 1759 had to be dismantled after 120 years because the rocks below cracked. The present one by James Douglass was completed on an adjacent rock in 1882. All four lighthouses have fulfilled their function of keeping ships safe and preserving precious lives.

Posted by India Office Records at 09:00:00 in Innovation , Science and environment