75 years since Victory in Europe

‘My dear friends, this is your hour. This is not victory of a party or of any class.  It’s a victory of the Great British nation as a whole…’
[Extract from Winston Churchill’s speech on 8 May 1945].

Looking back on the celebrations of VE day in 1945 seems especially poignant this year in our current crisis.  Stories told to me by my grandmother of air raids, evacuation and rationing have a new meaning given current restrictions.  Shortages of eggs, toilet roll and soap, empty shelves in supermarkets and long queues have become the new norm.  Yet we still cannot truly know what the Second World War generation went through 75 years ago. 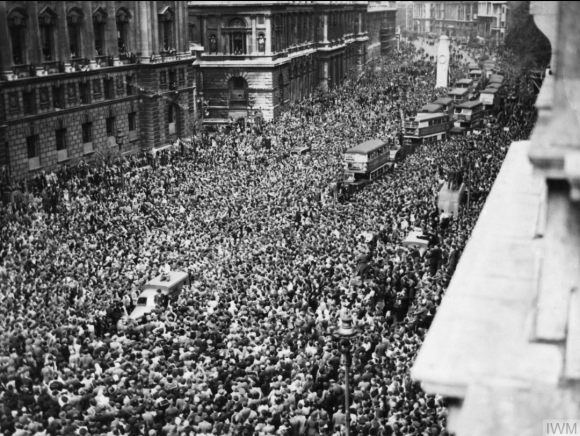 After the unconditional surrender of the German forces on 7 May 1945, Churchill announced that the following day would be a national holiday.  Up and down the country the celebrations started almost immediately and continued on 8 May with street parties, dancing, music, speeches by Churchill and King George VI and large amounts of beer.  Beer had not been rationed during the war and women were, for the first time, encouraged to drink it.  In advance of VE Day Churchill had personally checked with the Ministry of Food that there were enough supplies for the celebrations. 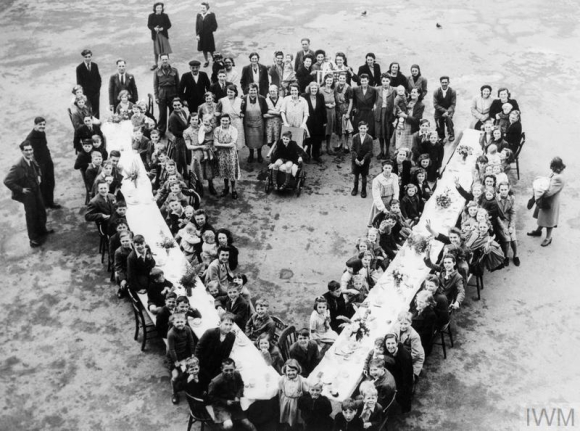 During his speech, Churchill had made clear that the war was not yet over and ‘let us not forget the toil and efforts that lie ahead’.  The war against Japan continued until two atomic bombs were dropped on the cities of Hiroshima and Nagasaki.  Group Captain Geoffrey Leonard Cheshire was one of the official British observers of the atomic bombing at Nagasaki. His eye witness account can be found in the Modern Archives and Manuscripts collections (Add MS 52572).  Cheshire describes how the photographers were unable to capture accurate photographs of the blast as they were overawed by the scene.  Japan surrendered on 15 August 1945, which is now commemorated as Victory over Japan (VJ) day.

As the Second World War fades from living memory the archival collections that record ordinary people’s lives and experiences become ever more important.  Contained within the British Library's collections are glimpses of a defining moment in the history of our nation.

A collection that is one of my favourites is the archive of Edgar Augustus Wilson and his second wife Winifred Gertrude née Cooper.  Contained within their personal archive are manuscript and printed ephemera that provide a personal insight into their lives in St Albans during the War.  Both husband and wife enlisted as Air Raid Wardens and served until 1945.  Their Air Raid Warden ID cards, badges and whistle as well as government-issued pamphlets, handbooks and post war food and clothing ration books form part of the modern archive collections. 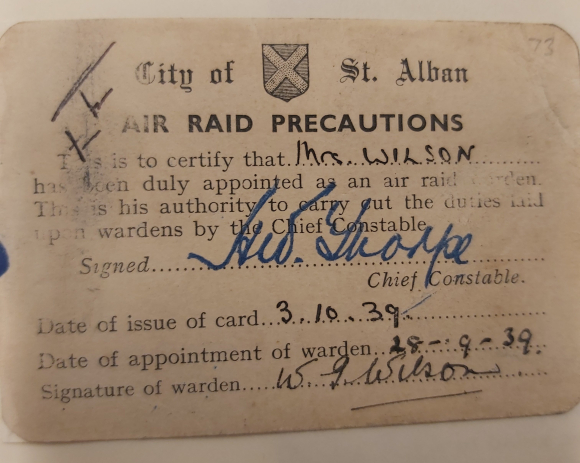 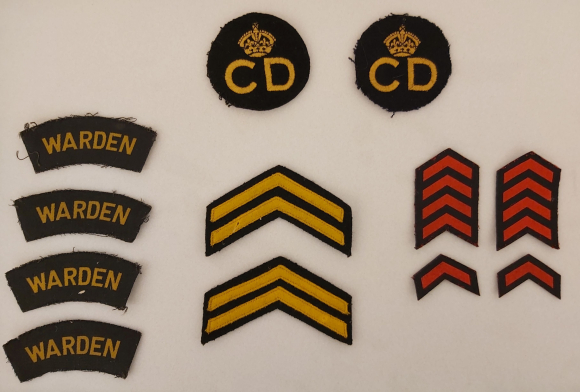 The official 75th VE day anniversary celebrations have now been postponed or cancelled due to Covid-19 but this will not stop us commemorating VE day. We remember the War as a moment when the country pulled together in support of a greater cause. T he need to social distance will have a lasting impact, celebrations such as those in 1945, are now impossible but living in the digital age means that we can still celebrate together by joining a moment of reflection and remembrance at 11am, watching the Queen’s speech, having a ‘street party’ in our homes and gardens, raising a ‘Toast’ or by placing a Tommy in our window to remember what our parents, grand-parents and great-grandparents endured.

More information on the British Library’s modern manuscript collections relating to the Second World War can be found here: