A (g)lovely gift from Peter the Great to John Evelyn

Gloves are an indispensable accessory.  They protect our hands from all manner of harm, and have served as a glamorous fashion statement for centuries.  Before their wider availability in the mid-18th century, gloves were treated as the embodiment of both power and protection; their luxury status and embedded symbolism making them the ideal gift of the wealthy.

These 17th century gloves belonged to the diarist John Evelyn (1620-1706).  Typical of their time, they are made from light doe-skin, embroidered with fine gold work flowers, and lavishly embellished with spangles (the 17th century equivalent to sequins) and gold fringe.  The significant skill required to produce gloves at this time rendered them a particularly expensive accessory, worn chiefly by the elite.  Designs were elaborate and ornamental, and as a general rule, the more ostentatious the glove, the more commanding (and rich) the hand.

Historically the gloves were believed to have been gifted to Evelyn by Peter the Great, Tsar of Russia (1672- 1725).  The story goes that whilst a tenant at Evelyn’s London property Sayes Court in 1698, Peter all but trashed the house and grounds.  From destructive wheelbarrow races through Evelyn’s immaculately landscaped gardens, to using paintings for target practice and furniture for firewood, the young Tsar was not as ‘great’ as his epithet may imply, and certainly not a model tenant. 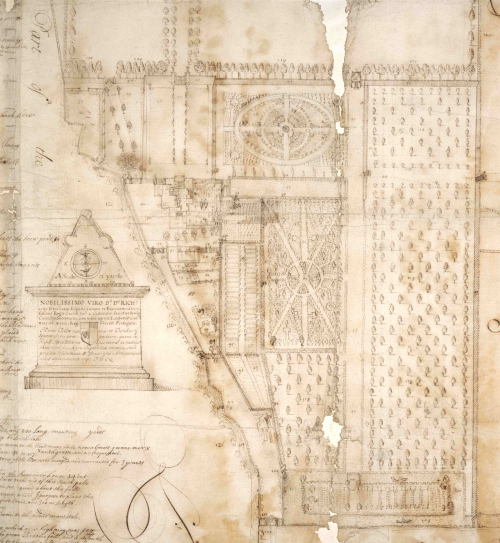 Add MS 78628. A Plan of Sayes Court and its Gardens. Images Online

Since it had been William III who had arranged the Tsar’s tenancy, the Treasury covered the £350 9s 6d of property damages incurred from his wild antics.  The gloves were sent by the Tsar to Evelyn as an apology for the terrible inconvenience.

Beyond merely being an expensive gift, the act of presenting gloves at this time was intimately connected to their symbolic and ceremonial past, and had accumulated numerous motives: a royal or political sanction, a gift of honour, a symbol of challenge, or of amity, a figurative token of love or a legal exchange.  The act was even embedded in the ceremonial investiture of monarchs, and in international diplomacy as a token of fidelity.  Queen Elizabeth I, who is alleged to have owned over 300 pairs of gloves, is believed to have engaged extensively in political glove gifting. The Evelyn Gloves are in fact remarkably similar to a pair that now reside at the Ashmolean Museum, that were presented to the Virgin Queen during a visit to Oxford.  By the 17th century, gloves were exchanged frequently between the wealthy, and so symbolic was the act that it wasn’t even seen to matter if they fit.

Unfortunately, the story behind the gifting of these gloves has never been corroborated with evidence, and so continues to remain speculation.  However, if we are to believe the myth, the message the Tsar was sending was far grander than a simple ‘sorry’. Not only would they have served as a not so subtle reminder to Evelyn of the Tsar’s superior status, but could also be seen as a humble extension of respect and friendship.  One wonders however, if this is the case, whether Evelyn might have preferred instead that the Tsar show his respect by not ruining his lawn.