In 1799 Captain John Norris of the Madras Engineers was aide-de-camp to Colonel Gent at the Siege of Seringapatam.  Following the assault and capture of the fort on 4 May 1799, Norris was appointed Superintending Engineer of reform of the fortifications there. In the months following the siege Norris undertook a detailed survey of the island of Seringapatam for the Company. 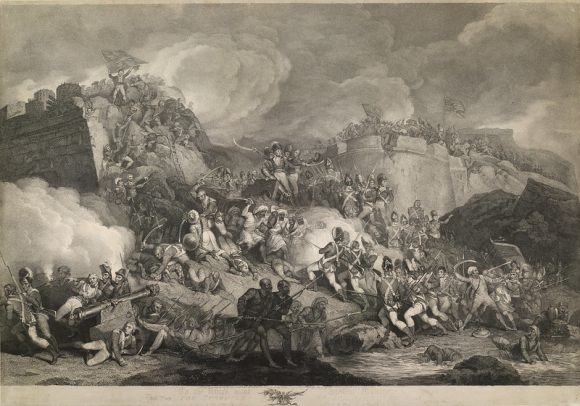 Norris's work brought him into conflict with Colonel Arthur Wellesley who had been appointed to command the fort following the siege.  Wellesley had instructed Norris to supply him with the plans and maps made during the survey, which Norris declined to do as it was contrary to his orders from Government.  Wellesley was reportedly very angry at what he viewed as Norris’s insubordination and reported him to the Madras Government as ‘not a fit person to be employed as the Engineer at Seringapatam’.  The Government however supported Norris’s refusal to supply the documents. 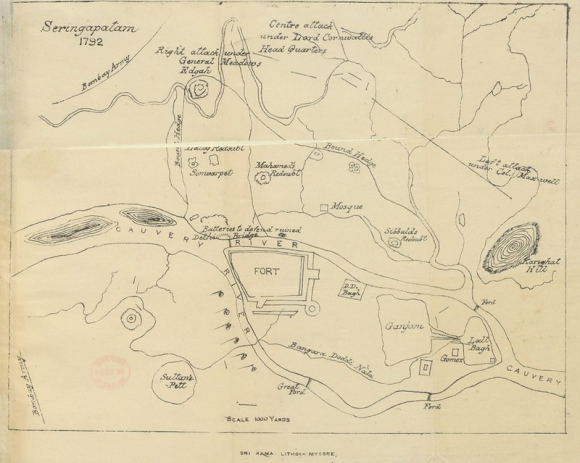 Plan of Seringapatam, 1792 taken from A Guide to Seringapatam and its Vicinity. Historical and traditional, 3rd Edn (Revised). 1897. BL flickr

John Norris was appointed an ensign in the Madras Engineers on 3 October 1781 rising to the rank of Lieutenant Colonel before retiring on 25 September 1811.  For most of his time in the corps he served alongside Captain Colin Mackenzie, the renowned surveyor whose collections are one of the foundations of the India Office Private Papers.

Norris’s time at Seringapatam appears to have made its mark on both him and his wife Lydia, the daughter of William Harcourt Torriano, whom he married in 1790.  On 19 January 1800 John and Lydia Norris christened their second daughter Helen Harness Seringa Norris.  The couple had one other daughter Lydia Dampier Norris born in 1794 who died at Cawnpore in 1825. 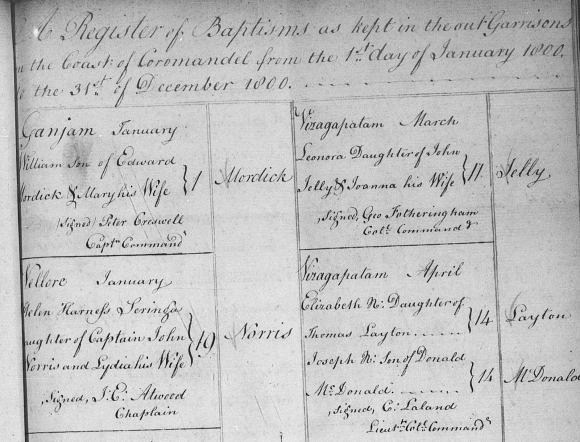 Historical records suggest Helen Harness Seringa Norris was fond of her unusual name as it was often recorded as her sole forename, including on her death register entry in 1866.

Seringa Norris was married in 1819 to the Reverend Charles Norman, Vicar of Boxted in Essex.  The couple had eight children, though only four survived infancy.  In 1820 they named their eldest child Seringa Lydia Frances Norman.

Seringa Norman married in 1842 to Joseph Proctor Benwell, a bank manager.  The Benwells had four children, their eldest being a daughter Seringa born in 1845.  Seringa Benwell married Charles Fuller Grenside, a printer ink manufacturer, in 1879.  They had a daughter in 1885 christened Seringa Dorothea.  Seringa Dorothea Grenside was married in 1908 to Laurence Arthur Grundy Lane, an insurance inspector, and their only child was named Audrey Seringa Lane.

By the time Audrey Seringa Lane was born in 1908, the Seringa forename had been passed down through five generations spanning over 200 years.  Naming daughters Seringa carried on, and by the 1960s it had spanned seven generations of John and Lydia Norris’s family and lasted for over 260 years.

Oher branches of the family continued the name too.  Charles and Seringa Norman’s daughter Sarah Elizabeth and son Edward both had daughters named Seringa and the name continued there for several generations too.