The East India Company and the Spice Islands

When the East India Company began trading in 1600, the focus of its activities was the Spice Islands of Southeast Asia rather than India.  There are many letters and documents in the India Office Records about the fierce, and sometimes violent, rivalry between the English and Dutch merchants as they strove to gain the upper hand in securing the valuable commodities grown in the region. 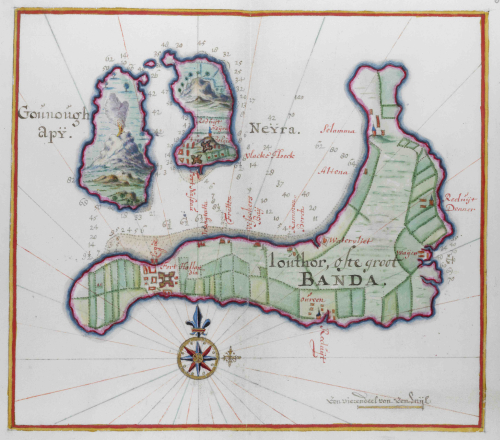 In 1621 the Dutch took the island of Lantar (now Lontor or Banda Besar in the Banda Islands).  The men at the English house were taken prisoner and the Company’s goods seized.  Robert Randall, the East India Company’s chief merchant on Lantar, was tied to a stake with a halter fixed to his neck.  He was terrified that his head would be cut off by the Japanese soldier who had already beheaded Chinese men found with the English.  Captain Humphrey Fitzherbert arrived in the Company’s ship Royal Exchange and negotiated terms of peace and the release of his fellow countrymen. 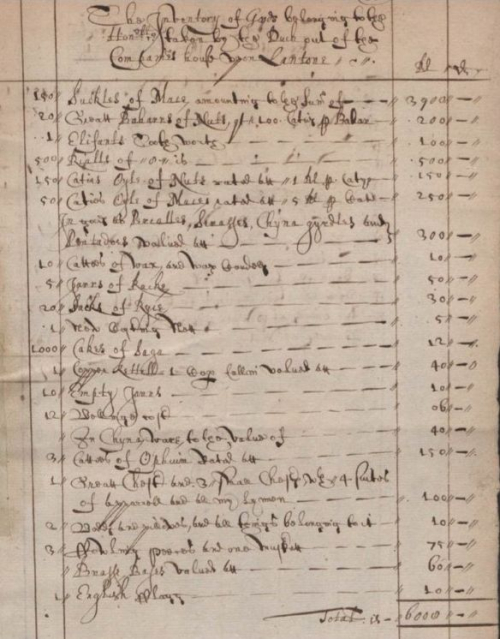 An inventory was drawn up of the Company’s goods seized by the Dutch: mace; nutmeg; elephants’ teeth (ivory); rials of eight; oils of nutmeg and mace; textiles; wax and wax candles; arrack; rice; cakes of sago; copper kettles; empty jars; China ware; opium; fowling-pieces; chests of clothes and linen; a bed and pillows; an English flag.  According to Fitzherbert, the Dutch flew an English flag on two of their ships, leading the local people to think that the English had betrayed them. 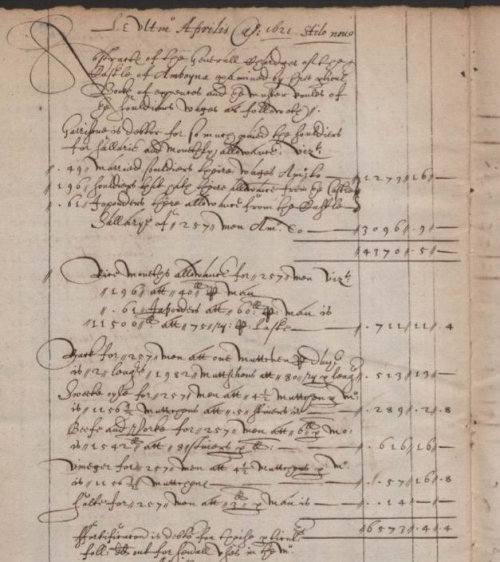 Accounts for the English ‘castle’ on Amboina for March and April 1621 survive in the Company archive.  A major expense was the upkeep of a large garrison – salary, monthly allowance and provisions for 49 married soldiers, 196 soldiers, and 61 Japanese.  Their diet was rice, arrack, beef, pork, ‘sweet oil’, vinegar and salt.  Food for workmen is also listed – rice, beef and pork- and for prisoners – bread, wine, fish.  Sick men in the hospital were supplied with beef, pork, rice, wine, and fresh victuals.

Money was spent on barrels of powder, shot, matches, tiles, planks, shoes, porcelain, sailcloth to make tents, and table cloths.  There were slaves to clothe with shirts, ‘baftoes’ and silk, and they were also provided with other unspecified ‘necessaries’.  A school with ten pupils was maintained.  The Governor spent money on gifts to oil the wheels of commerce - rice, textiles, and silk.

These fascinating documents shed light on life in the European posts in Southeast Asia in the early 17th century, where the threat of untimely death was always hovering over the merchants trying to win commercial advantage for their masters.

East India Company Factory Records (IOR/G) are available as a digital resource from Adam Matthew Digital which is free to access in British Library Reading Rooms (all British Library buildings are closed at present).