The most noted girls of the town: A newly discovered edition of Harris’s List of Covent Garden Ladies

Harris’s List of Covent Garden Ladies is a notorious publication that detailed the names and ‘specialities’ of prostitutes working in Covent Garden and the West End during the late 18th century.  When the first edition appeared in 1760, it was immediately derided as pretending 'to give some account of the most noted Girls of the Town; but it has all the air of a lying Catch-penny Jobb' (Monthly Review, June 1760).  A contributor to the London Magazine claimed that the sex workers were 'frightful, and smell strongly of paints, pills, bolus’s, and every venereal slop' (April 1760).  Yet despite, or perhaps because of, its scandalous content Harris’s List amassed a large enough readership to be published yearly until 1794. 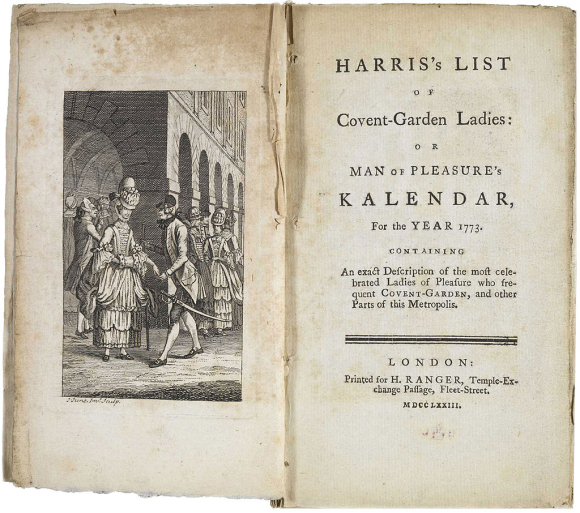 It was doing so well that, by 1791, a rival Harris’s List had appeared.  An indignant but anonymous newspaper notice was printed, claiming the rival edition was 'a compilation of falsehood and imposition' and urging discerning readers to keep their eye out for the so-called authentic version of the directory.  No copies of this 1791 rival Harris’s List survive today.  In fact, the only extant edition of this rival publication was, until recently, thought to be the one from 1794 – suggesting that it ran for at least four years.

However, we have recently acquired a copy of the rival Harris’s List from 1793.  It was printed for John Sudbury in Southwark rather than the pseudonymous ‘H. Ranger’ who occupies the imprint in the official Lists.   John Sudbury was a bookseller and occasional publisher who was active between 1786 and 1795, dealing in cheap bawdy material. 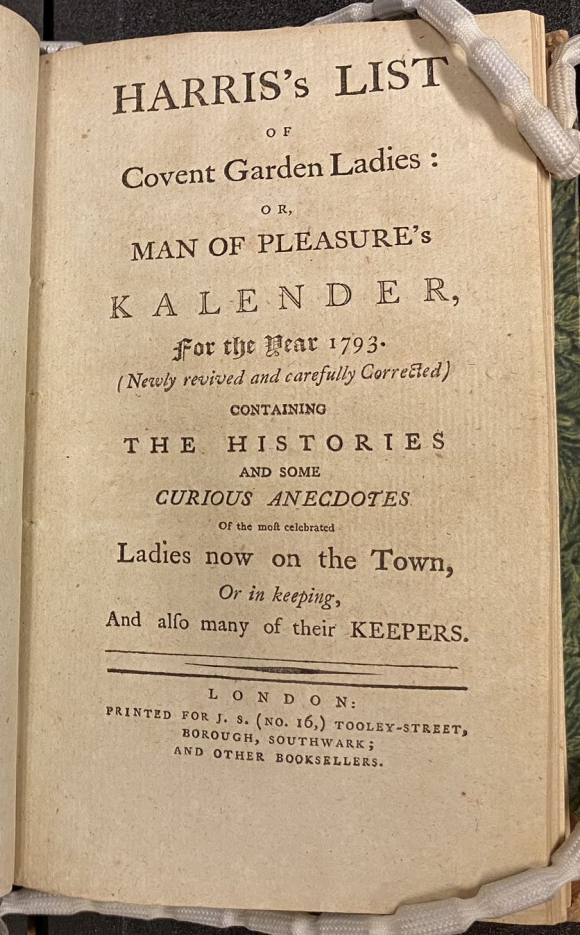 Even though it has the same title, this edition describes different sex workers to those featured in the official Harris’s List for 1793.  However, the descriptions are similar in that the line between authenticity and titillation is somewhat blurred in both editions, probably containing only kernels of truth.  In the rival Harris’s List, Miss Patty S—n—rs, for example, is described as the daughter of a bricklayer’s labourer and was one of 'numerous offspring'.  She worked in 'Lissen-green, near Paddington'.  Miss Betty Fr-el, is said to have lost both her parents and, as her stepfather would not support her, joined a 'Strolling Company' and became an actress.  The 'principal hero got the better of her chastity' and, in the words of the List, she 'was soon initiated into the misteries of the Cyprian Deity'.  Another woman, Mrs Stam-er at No.7, Charles-court, Strand, is a widow and nearly forty years old. Having said that, however, she still had 'very fine teeth'. 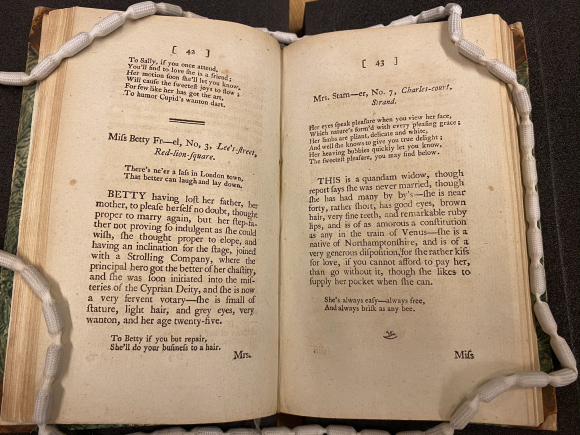 Harris’s List of Covent Garden Ladies provides insight into the underworld of Georgian London and is invaluable for the studies of censorship, erotica and the treatment of women in the late 18th century.  Although the male gaze and its haze of titillation prevents us from getting anything other than a glimpse of these unfortunate women, this is far better than them being lost to history altogether.  While this new acquisition is important from a bibliographic perspective, adding to a precious and limited canon of this notorious publication, it is the stories of these women that are the most significant part of this discovery.

Further Reading:
The majority of the British Library’s copies of Harris’s List of Covent Garden Ladies are part of the Private Case collection.