When Commander John Porter heard of a case of shipwreck in the summer of 1843, there seemed to be nothing remarkable about the case.  Shipwrecks were common, and navigation in the Gulf could be dangerous.  But this shipwreck was different.  Porter went to offer what assistance he could to the stricken ship, the Mary Mallaby (also written Mary Mullaby).  He offered to assist Captain Charles Fisher with attempting to refloat his ship, which he thought would be possible.  Instead, Fisher rejected his offer, and insisted on selling the Mary Mallaby to the Shaikh of Qeshm. 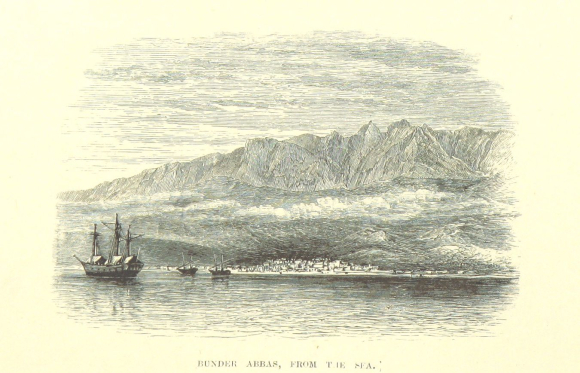 The ship’s log records that when the ship ran ashore, a ‘party of Arabs’ arrived in a small boat to offer assistance, but then refused to help by taking the anchor.  A few of them stayed on board overnight, but in the morning, they had vanished – along with two treasure boxes.

Fisher’s version of events differed markedly from that of the Shaikh of Bandar ‘Abbas.  Fisher claimed the Shaikh had refused to help, whereas the Shaikh claimed he had assisted as much as he was able to, given that it was the date harvesting season, and indeed countered that some of his offers of help had been refused.  Fisher even went so far as to object to the Shaikh sending the letter to Porter informing him about the wreck. 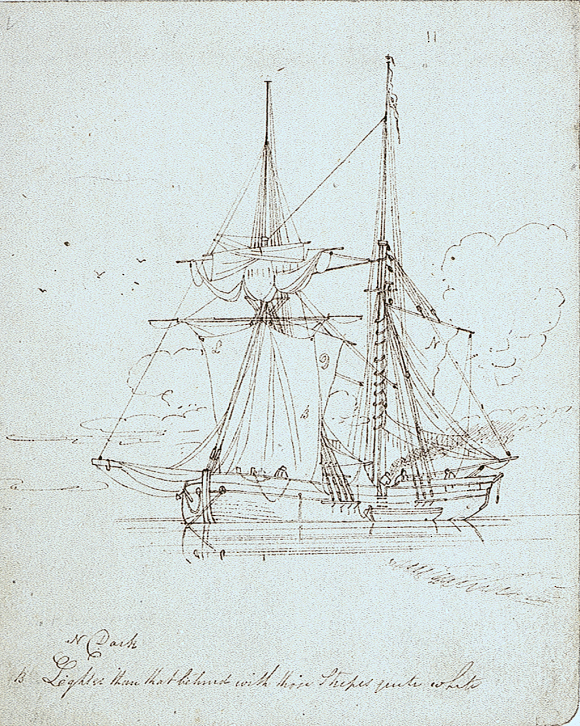 Looking into the circumstances of the wreck carefully made Porter more suspicious.  The ship had run aground at a location that had been properly mapped, and yet Fisher had not let go the anchor early enough.  The incident had occurred during the afternoon, in calm, sunny weather.  He had then hoisted his sails, driving his ship further on shore.  Both the crew and the people watching on shore agreed that it looked deliberate.

Following the event, more facts began to emerge.  Fisher was seen in Muscat retrieving a chronometer and a sextant which he had left there before the incident, and which could have been damaged by the sudden impact of the wreck.  A traveller on the same ship to India as Fisher and his wife heard her say that her husband told her to hold tight just before they hit the shore. 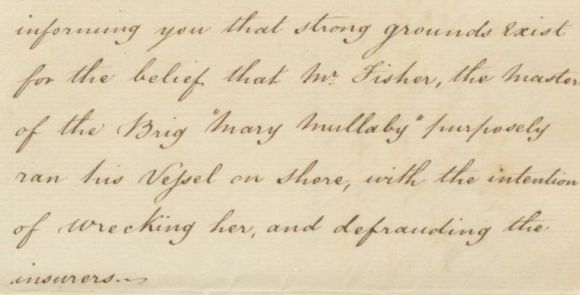 Letter from the Chief Secretary at Bombay Castle, 20 March 1844 to Captain Samuel Hennell, Resident in the Persian Gulf, giving his suspicions about Fisher IOR/R/15/1/102, f. 34r

The final piece of evidence came when two treasure boxes matching Fisher’s description were dredged up from the wreck site while the new owner of the Mary Mallaby, Sultan Thuwaini bin Sa’id, was looking for the anchor that had been lost.  These were carefully carried to be opened in the presence of the shaikhs of Bandar ‘Abbas and Qeshm, and all other local dignitaries, including Captain James Cromer of the Columbia.  Cromer described the opening of the boxes, and the astonishment of the room, when they were found to contain only copper dross ‘such as I have sometimes seen ships have for ballast’.  The opinion of the Bombay Government was clear: this was attempted fraud, and they conveyed as much to Fisher’s insurers.

Articles about the insurance fraud case can be found in the British Newspaper Archive - also available from Findmypast.