During the last few months you’ve probably puzzled over at least one emoji quiz, one of many inventive online distractions people are sharing to while away the time during lock-down.  These quizzes have something in common with the 'rebus' – a kind of picture puzzle which gained popularity in Europe from the 16th century onwards.  In place of words, the writer inserts pictures and letters whose names sound out the meaning of the sentences.

A childhood letter in the form of a rebus addressed to two young girls survives among the papers from the Granville family archive preserved by Harriet Cavendish, later Lady Granville (1785-1862), now part of Add MS 89382. 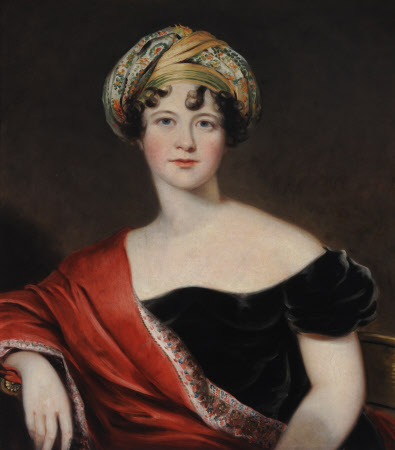 Portrait of Lady Harriet Cavendish, Countess Granville (1785-1862) by Thomas Barber the elder, from the collections at Hardwick Hall © National Trust

In 1790, young Harriet and her siblings Georgiana and William, the three children of William Cavendish, fifth Duke of Devonshire (1748–1811), and his wife Georgiana, Duchess of Devonshire (1757–1806), were joined in their nursery at Chatsworth by two new playmates – five year old Caroline Rosalie St Jules and two year old Augustus Clifford. 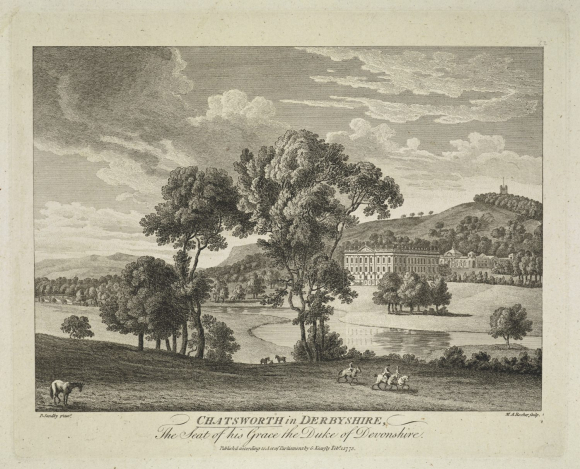 Caroline and Augustus were actually the children’s half sister and brother. They were the illegitimate children of their father, the Duke, and his mistress, Lady Elizabeth Foster, who had been living with the Duke and Duchess in a long-lasting ménage à trois.   The children had been born abroad where they spent their earliest years, and only came to live with their mother at Chatsworth in 1790.

Caroline was almost exactly the same age as her half-sister Harriet (or Hary-o, as she was called by the family).  Both girls had both been born in August 1785, though far apart.  From this time on, from the aged of five, they spent the rest of their childhoods together.  Besides having the company of their three brothers and sisters, they were often joined for visits and on holiday by Hary-o’s cousins, including Caroline Ponsonby, later Caroline Lamb, who was also born in 1785, the same year as the two sisters.

The rebus letter is addressed to both Hary-o and Caroline St Jules, but it is unsigned.  Could it have been written by their cousin Caroline Ponsonby?  Or was it from another young friend of their acquaintance? 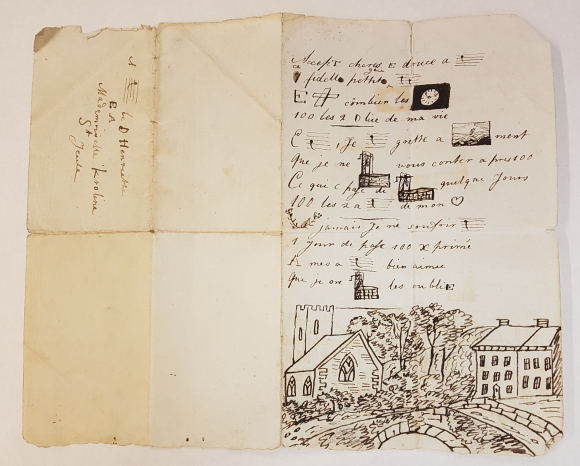 Can you read the letter? If you know the French for 'well' and 'sea' and the names of the notes in the sol-fa music system you are nearly there!  Our imperfect attempt is at the end of this post.  Bonus points if you can hazard a guess at the identity of the village or town drawn at the foot of the page.

This charming and affectionate letter must have held particular significance for Hary-o, who kept it all her life.  It came to the British Library folded in a silk purse, along with surviving letters from her mother Georgiana and other treasured papers.