Remembering the Vere Street Coterie: a story of gay community, a police raid and library censorship

During Pride Month especially, it is vital that we remember the injustices and hardships faced by the British gay community over the centuries.  On 8 July 1810, the lives of a group of gay men in London were turned upside down.

The Bow Street Runners, an early version of the police force, launched a surprise raid on the White Swan in Vere Street, a molly house.  Many were arrested, six were convicted of sodomy and two others were later hanged.  This has become known as one of, if not the most, brutal public punishments of gay men in British history.

In 1813 a lawyer called Robert Holloway tells the story, somewhat disapprovingly, in a book called The Phoenix of Sodom, or the Vere Street Coterie. The British Library has two copies of this book, and both were secreted away in the Private Case, a collection of forbidden books, as soon as they arrived. 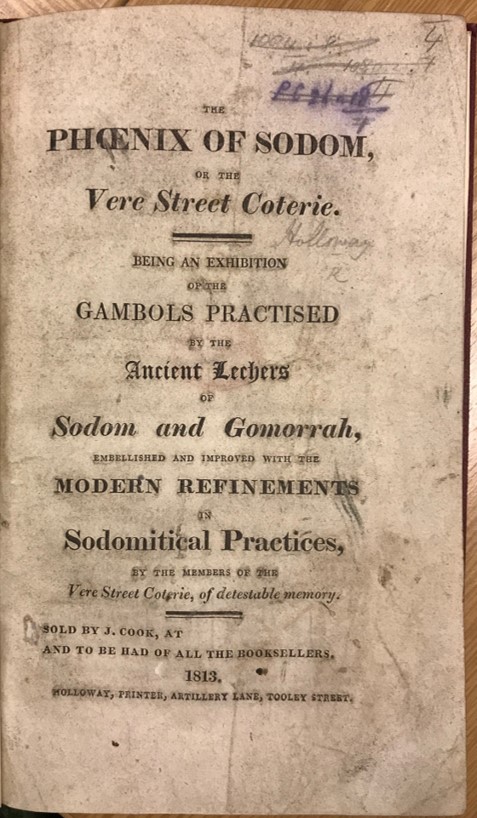 The Phoenix of Sodom, or, The Vere Street Coterie. Sold by J. Cook, at and to be had of all the booksellers, 1813.

Homosexual activity was illegal and heavily prosecuted during the 19th century.  Gay men were treated with derision and disgust, and their punishment often involved public humiliation.  Molly houses were meeting places for gay men.  They were taverns, public houses, coffee houses and brothels where men could meet, socialise and find sexual partners.  Gay couples could even get married.  Even though same-sex marriage was not legalised in the United Kingdom until 2014, unofficial ceremonies were conducted at the White Swan by a minister called John Church, arguably the first openly gay ordained Christian minister in England.  Needless to say, visiting these places was risky.

On 8 July 1810, amidst the chaos and panic, the Bow Street Runners arrested many men at the White Swan.  Six were charged with sodomy: William Amos, whose alias was Sally Fox, Philip Kett, William Thomson, Richard Francis, James Done and Robert Aspinall.  They were sentenced to an hour in the pillory and some were also sentenced to imprisonment.

On 27 September, the streets surrounding the Old Bailey were crammed with angry, self-righteous and moralistic people waiting with bated breath for the prisoners to appear.  The mob was armed with mud, the corpses of cats and dogs, rotten fish, spoiled eggs, dung and whatever else they could get their hands on.  Soon the men were bleeding and beaten insensible.

But the authorities didn’t stop there.  Two men who had visited the White Chapel in the past were betrayed by an informer and were sentenced to death.  They were Thomas White, a 16-year-old drummer of the Guards and John Newbolt Hepburn, a 42-year-old ensign in a West India regiment.  They were hanged at Newgate prison on 7 March 1811.

The terrible fate of these men, who became known as the Vere Street Coterie, terrorised the gay community in London.  Meanwhile, the mainstream press revelled in it, denouncing the men as “monsters” before the trial had even begun.  Raids like this were unfortunately all too common and were part of a general crackdown on immoral behaviour in the first half of the 19th century.

The British Museum Library was part of this; the Private Case collection was created in response to the Obscene Publications Act, which made the spread of obscene material illegal.  Library staff decided that The Phoenix of Sodom was obscene, obviously because it was about homosexuality, and locked both copies away.  Since then, they’ve been removed from the Private Case and restored to the general collection, where anybody can call them up and examine their account of a disturbing piece of our history.

Posted by India Office Records at 11:05 AM