Solving a suffragette mystery – who was Miss Wolff van Sandau?

In 2019 a Women’s Social and Political Union medal was sold at auction in London.  It was awarded in 1912 to Elsie Wolff van Sandau in recognition of ‘ a gallant action, whereby through endurance to the last extremity of hunger and hardship, a great principle of political justice was vindicated’. 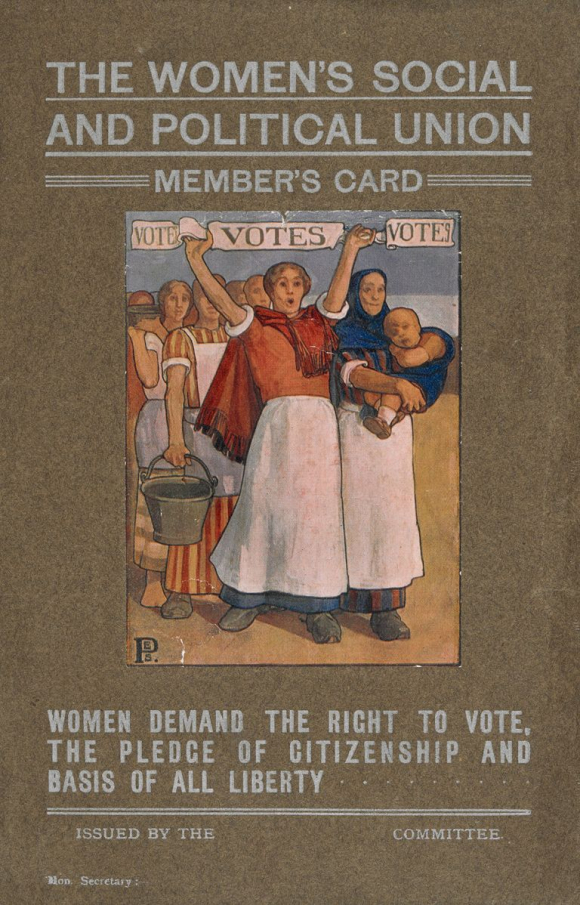 On 4 March 1912 Miss Wolff van Sandau broke a window of the post office in Howick Place, Victoria.  She was sentenced to two months’ hard labour in prison for wilful damage. 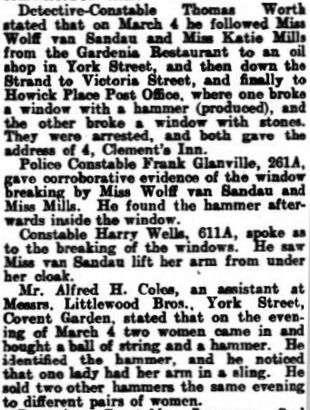 Miss Wolff van Sandau had previously been imprisoned in February 1907 after taking part in a suffragette deputation, and again in November 1910 when she was arrested in Parliament Square on ‘Black Friday’.

The name van Sandau rang bells with me.  We published a blog post featuring Lewis van Sandau of the Bengal Army who was shot dead when mistaken for a ghost.  I wondered if I could find a connection between our unfortunate officer and the suffragette.

Votes for Women published a brief biography in 1910 stating that ‘Miss Wolff von Sandau’ had worked for women’s suffrage for nearly 30 years.  She was a music teacher.  Her grandfather Reverend Dr Ernst Schwabe had been private chaplain to Queen Victoria’s mother.

I found the marriage in London in 1832 of Ernst Schwabe’s daughter Bethia Friedericke to Ernst Woolf, who was a flax manufacturer in Leeds.  In the early 1840s Ernst and Bethia moved with their children to Dresden in Germany.  Their daughter Elise Eugenie Mathilde Wolff was born there in 1843.

In the 1881 census Elise Eugenie M. Wolff is a music professor aged 37 living in Clapham, South London.  In 1891 she is listed in Kensington as Mathilda Wolff, pianist.

A newspaper advertisement in 1888 names her as Fraulein Mathilde Wolff of the Dresden Conservatoire. 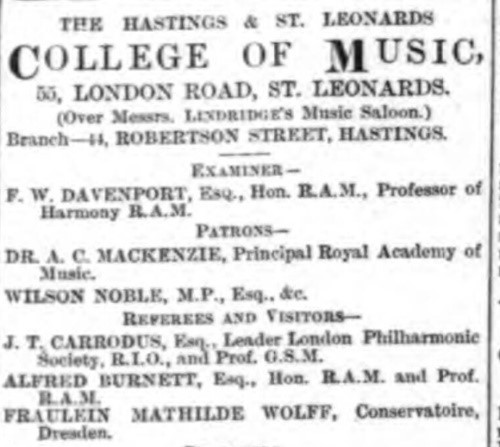 There are reports of her concerts, such as this one in 1888 at Collard’s Rooms in Grosvenor Street London. 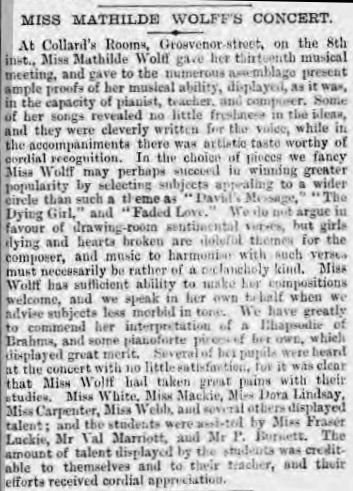 Miss Wolff advertised in newspapers for pupils and for lodgers. She entertained members of the Women’s Vegetarian Union at her home.

In 1889 she used the name Wolff  van Sandau when publishing a song ‘David’s Message’.

It was reported in 1895 that Miss Mathilde Wolff van Sandau was managing the new Equitable International Chess Club for Ladies.

In 1911 she refused to provide information to the 1911 census and is recorded as simply ’Miss Wolfe – Suffragette’.

Her brother Henry William Wolff (1840-1931) also left Germany to live in England. He was a well-known journalist and writer and founder of the Co-Operative Alliance.

In the 1920s Matilda van Sandau of Brooklyn Road, Shepherds Bush, was offering typewriting and translation services.  Is this the same woman?

By 1926 our Matilda was lodging in Putney.  She died in a local nursing home on 29 August 1926 aged 83 and was buried in Putney Vale Cemetery as Matilda Wolff.

One mystery remains.  Why did Matilda adopt the name van Sandau?  I have found one connection between the families.  Andrew van Sandau, brother to Lewis, was a witness at her parents’ marriage.

Further reading:
Her recorded surname varies between Wolff and Wolff van/von Sandau in census returns, electoral registers and directories, and her first names are any combination of Elise Eugenie Mathilde with variant spellings. It appears she is named as Elsie only in suffragette records and related newspaper reports.

Entry in Who Was Who for Henry William Wolff.