We might feel like we’re living through a surreal period of strange news at the moment, but that’s nothing compared to some of the stories reported in news pamphlets of the early 17th century.  During this period reports of freak weather, unearthly sightings of ghosts, monstrous births and more were frequent.  The question is, did people living in the 17th century think these reports were as strange as we do today?

In 1616, news broke of three dead bodies rising from their graves in a town in Germany.  In the aftermath of a ‘tempest’, the townspeople believed they saw three corpses rising from the graveyard to preach a terrible warning about God’s wrath.  Rumours of this spread, pamphlets were printed across Europe and news of it eventually reached Edward Allde in London, where he printed this account. 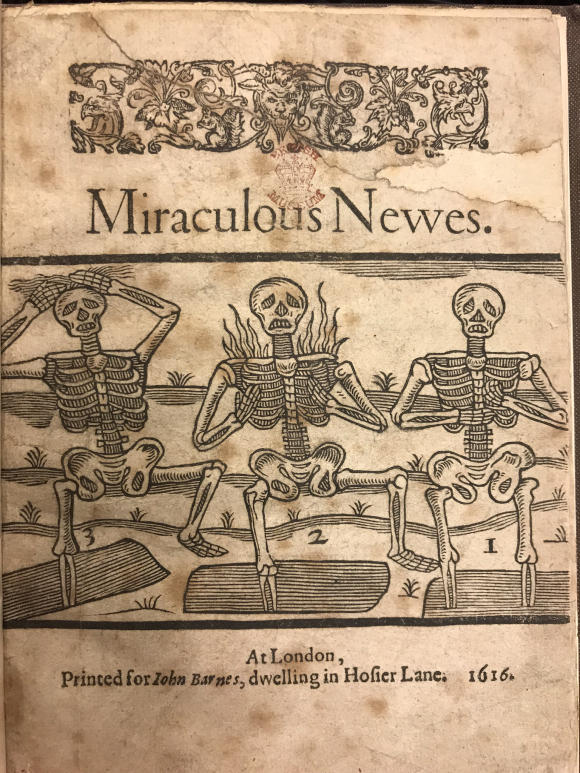 Miraculous newes, from the cittie of Holdt, in the Lord-ship of Munster (in Germany) the twentieth of September last past, 1616. Where there were plainly beheld three dead bodyes rise out of their graves, admonishing the people of judgements to come. London: Printed [by E. Allde] for John Barnyes, 1616.

As you can see, 'Miraculous Newes' is splashed across the half-title page, just as any sensational headline would be today, and a fantastic woodcut of the three skeletons is emblazoned below.  This incident may seem surreal to us today but then it would have been only too believable.  People in the early modern period were accustomed to interpreting strange sightings and weird phenomena as signs of divine judgement or wrath.  This was the only way they could interpret them.

So did people always believe these strange news reports?  Well, in 1620, Nathaniel Butter published a news report translated out of Italian about a vision seen over the Prophet Mohammad’s tomb in ‘Arabia’ and an account of the skies raining blood in Rome. 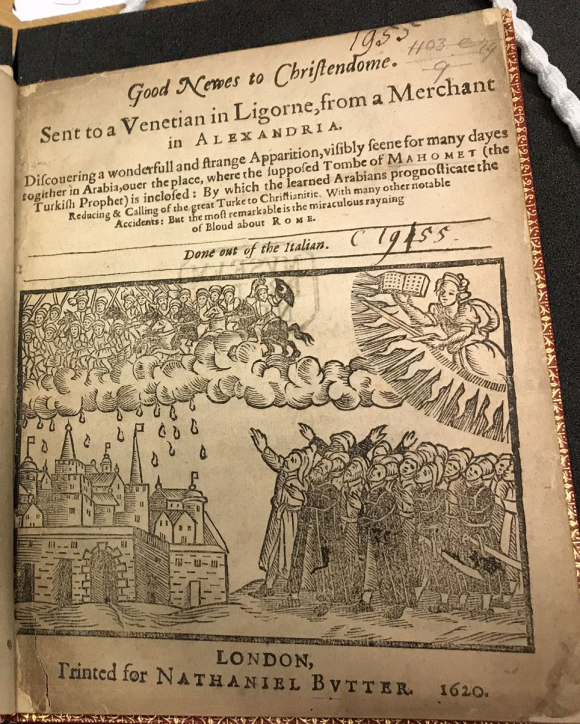 Cortano, Ludovico. Good newes to Christendome. Sent to a Venetian in Ligorne, from a merchant in Alexandria, Discovering a wonderfull and strange apparition, visibly seene for many dayes…with many other notable accidents. London: Printed for Nathaniel Butter, 1620.

In the preface, the translator writes that he found it hard to believe this account.  After all, other recent strange reports, such as the 'Sussex Serpent, the German Ghosts' (a reference to the pamphlet described above?) and a great army marching in the sky, all 'came out of the shop of invention'.  But he apparently realised his mistake and is now convinced that this vision isn’t fake news. This one is definitely true, and if it’s true, then it has to be a sign from God.

It wasn’t just ghosts and visions that were divine interventions either.  Extreme weather was also a likely sign from God.  This pamphlet is a 'true relation' of a storm and severe flooding in Barcelona and the surrounding area in November 1617.  The woodcut depicts people drowning in the floods.  It was only with much prayer and dipping of the Holy Cross into the water that the storm eventually abated.  The pamphlet ends with a reminder of God’s 'chastisements and warnings' and a warning to serve him with 'more truth and sinceritie'. 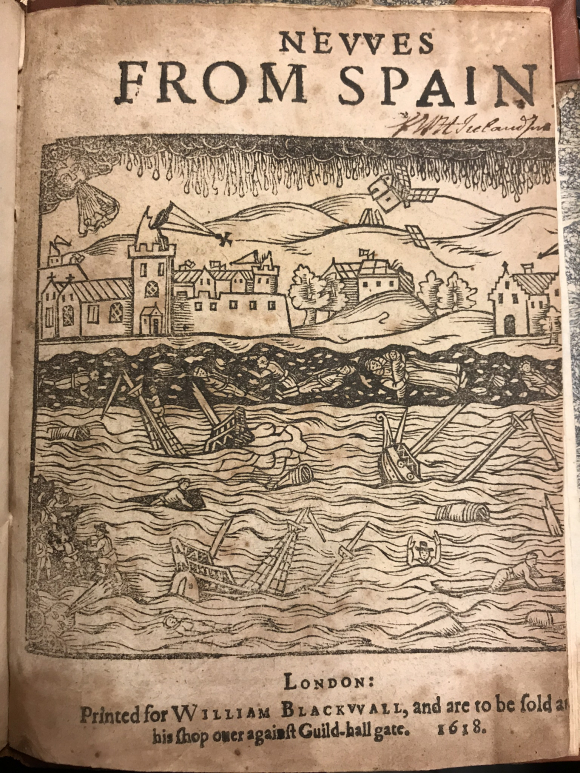 Rejaule, V. A true relation of the lamentable accidents, caused by the inundation and rising of Ebro, Lobregat, Cinca, and Segre, rivers of Spaine. Together with a narration of a fearefull storme, which happened the third of November, in the yeare 1617. In the haven and port of Barcelona. London: printed for William Blackwall, 1618.

These strange news reports that today we would brush off as fake news were in fact serious matters in the early modern period.  Whilst people may not have believed every incredible story, they were wary enough of divine judgement to certainly believe some.  Strange news reports like these became more prevalent in times of upheaval, anxiety and uncertainty, such as in the build-up to the English Civil War, as people didn’t know what to believe.  Surreal times generated surreal headlines, and we can certainly empathise with that.

Posted by India Office Records at 09:00:00 in Rare books , Religion , Science and environment