The forgotten Prince of Burma

The roller coaster ride for royalty in 19th century Burma is well documented in British Library collections.  As well as printed biographies in the English and Burmese languages, the India Office Records contain a mass of correspondence, reports and private papers pertaining to British operations in Burma, particularly regarding the reign and dethronement of King Thibaw, Burma’s last King.

Some of these tumultuous tales are lesser known than others.  An album of photographic illustrations recounts a remarkable journey by a British expeditionary force through the recently annexed country.  Within this document is an intriguing tale of daring escapes, hidden identities, attempted revolution and a long forgotten prince.

King Thibaw ascended the Burmese throne in 1878 aged just 19.  The princes and princesses of Burma had been summoned to the palace in Mandalay to attend the death bed of his father King Mindon.  As each arrived, they were cruelly executed and buried in the palace grounds.  Over 70 family members and potential rivals were eradicated.  This massacre was most likely orchestrated by the Queen Mother and Thibaw’s wife and half sister, Suphayalat, to secure his place on the throne.

The photographic illustrations of the Mandalay & Upper Burma Expeditionary Force, taken and compiled by cavalry officer Robert Blackall Graham between 1886-7, told of two princes who survived the massacre.  Prince Moung Peng and his older brother, grandsons of King Mindon, were rescued by phongyis. 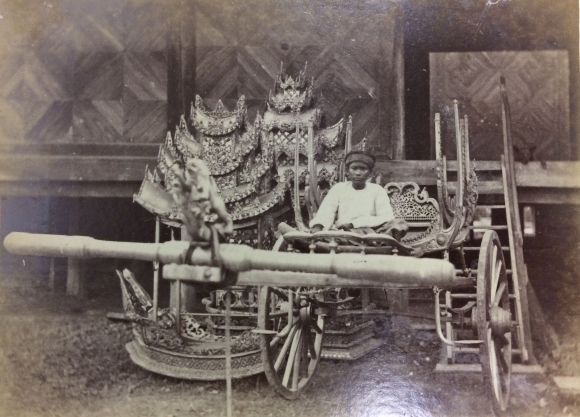 Portrait of Moung Peng, a grandson of King Mindon, here seen seated in a royal carriage.  At the time of the taking of this photograph he was aged thirteen. Photographer Robert Blackall Graham, 1887. Photo 996 (56)

Phongyis were Buddhist monks. They dressed in orange robes wrapped around the body, usually thrown over the left shoulder.  Their heads were shaven and always uncovered and they carried a palm leaf fan for protection from the sun.  A phongyi lived on charity, taught the young and lived a life of devotion, in order to be absorbed into the divine essence.

The princes were spirited away from danger and hidden in temples amongst the phongyis, disguised as priests for many years until the British suppression of Mandalay meant the immediate danger to their lives had subsided.  They resided in Ava for a while, but after mistreatment by his older brother, Moung Peng sought refuge with his former protectors in Mandalay.

An astrologer prophesised that Moung Peng would one day be returned to the Burmese throne.  In December 1886 the prophecy was used as justification to rebel against the invading British forces and Moung Peng became the focus of a botched coup.  A plot was arranged to set four fires in Mandalay and draw the British forces into a trap.  One of the fires was mistakenly lit before the arranged date, revealing the entire plan to the occupying armies.  The instigators of the plot, amongst them two senior Burmese monks and several priests, were transported for life to the penal settlement in the Andaman Islands. 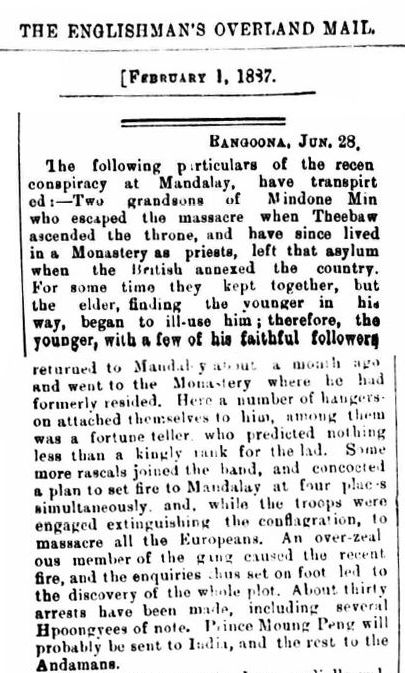 Prince Moung Peng, aged just 13, was sent to Dr Marks’ school, a Christian mission in Rangoon. The British aimed to educate the prince in a secure environment and remove any threat he might pose to their control in Burma.  His eventual fate is unclear, but he never fulfilled the prophecy to become King of Burma.