Fifty years ago today, on 23 July 1970, the late Sultan Qaboos overthrew his father, Sa’id bin Taimur, in a British-supported palace coup in the monsoon soaked southern province of Dhofar to become ruler of the Sultanate of Oman.  He was to go on to become the Middle East’s longest ruling monarch until his death in January 2020.

Qaboos’ role in facilitating dialogue such as that which led to the 2015 Iran nuclear deal is now well known but perhaps lesser-known are the circumstances of his early years.  It is said that the first seven years are the formative years of a person’s life, thus the information on Qaboos gleaned from digitised India Office Records,  although sparse and seemingly incidental may be of quite some significance.

In October 1940 the British Political Agent, Muscat, recorded a conversation with Sultan Sa’id concerning succession in Muscat that should anything happen to him ‘at present he has no male heir and has no particular affection for any single member of his family’.  Further, he would prefer a British officer to fill the post of Regent rather than any other members of his family.

Qaboos was born a month later in November 1940 to Sultan Sa’id bin Taimur, Sultan of Muscat and Oman, and Mazoon Al-Mashani, ‘a Dhufari women of good family’.  Sultan Sa’id received the news from Dhofar in Muscat. 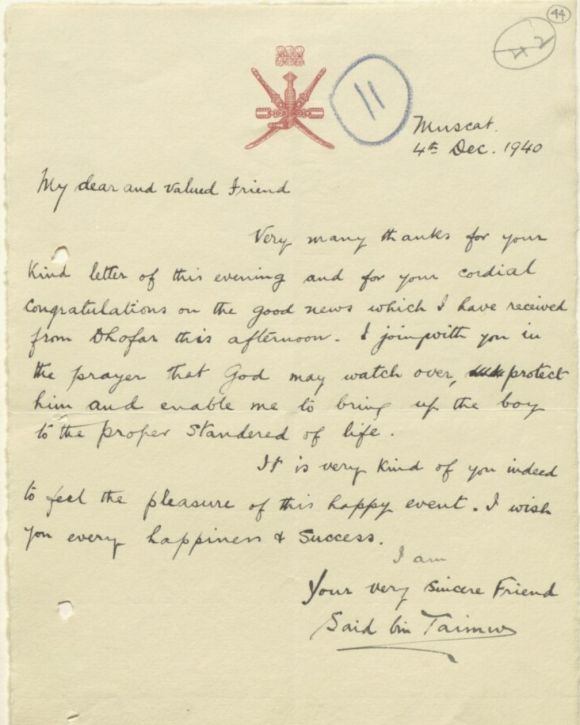 As the child was legitimate congratulations were sent by the King of England and the Viceroy. 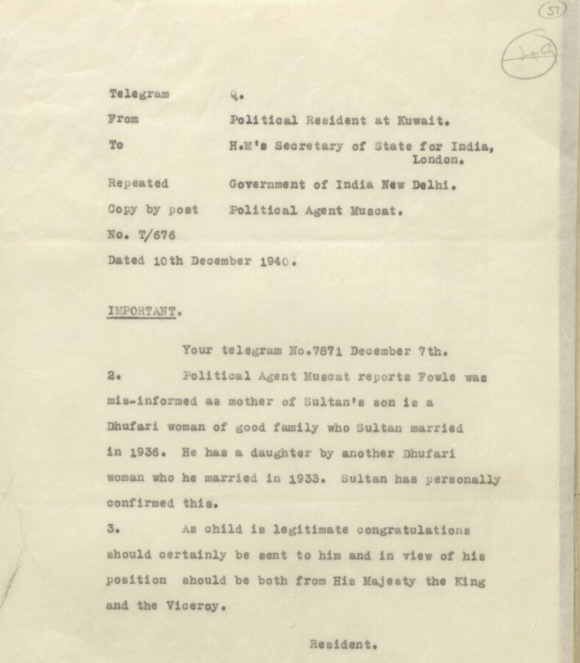 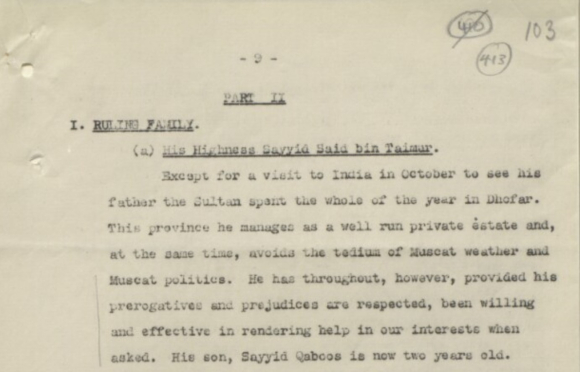 Interestingly, Taimur bin Faisal, Qaboos’ grandfather, who had been allowed by the British to abdicate after many years of imploring British officials, kept his grandson in mind as he lived out his life in India and Japan under the name of Al Said, ending a telegram in 1943 with ‘MY BEST WISHES TO QABOOS’. 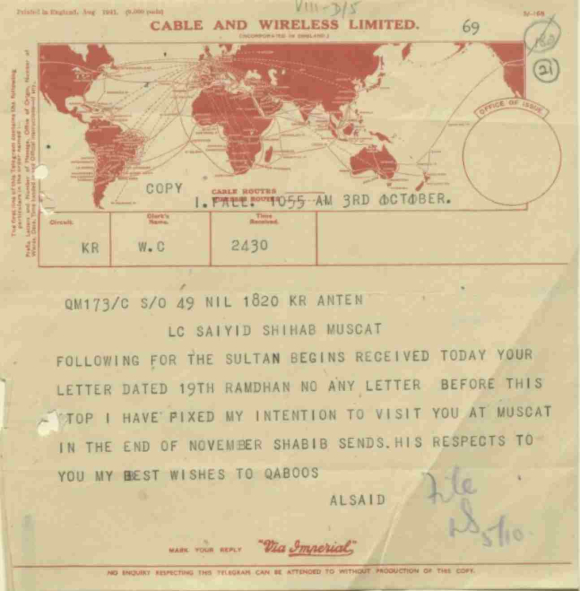 In 1945 the Political Agent, Muscat informed Colonel Galloway, the Resident in Bushire, that he had inquired to Sultan Sa’id about the education of Qaboos.  It seemed Sa’id was considering an elementary education in Egypt from the age of eight and indeed had discussed this with King Farook. 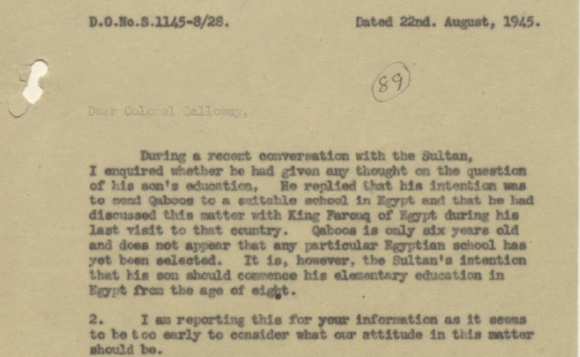 The Annual Muscat Administration Report for 1950-51 notes the isolation of the Heir Apparent.  Qaboos, now aged ten, had still not started education in Egypt but was kept ‘strictly under constant supervision and guard’ rarely meeting anyone outside of the palace.

Qaboos’ education was eventually to take place in the UK in Bury St Edmunds, Suffolk and at the Royal Military Academy, Sandhurst.  From here he returned to Salalah where he was kept as a virtual prisoner by his father forbidden to meet anyone apart from the Sultan’s trusted advisors.  Sultan Sa’id’s ‘personal estate’ with its myriad petty restrictions had become intolerable for its inhabitants and in 1965 a rebellion had started.  It was in the Sultan’s palace, Salalah on 23 July 1970 at the height of the Dhofar War that with the help of his Sandhurst classmate, Tim Landon, that a British-supported coup took place, and Qaboos became the Sultan of Oman.

It was often noted by commentators that in contrast to other Gulf states, Qaboos was ‘alone on the throne’, ruling in isolation from other family members.  Perhaps these glimpses into his early years shed light on this behaviour in his later life.