Vickers Jacob – a life in Ireland, India and Australia

In 1818 the Board of Commissioners for the Affairs of India received a memorial from Edward Cahill, a boot and shoe maker in Dublin.  Mr Cahill reported that in 1808 he had supplied Vickers Jacob, a Bengal Army cadet, with boots and shoes to the value of £10 16s 0½d.  Jacob left Dublin shortly afterwards without having paid and Cahill asked for help in recovering the debt. 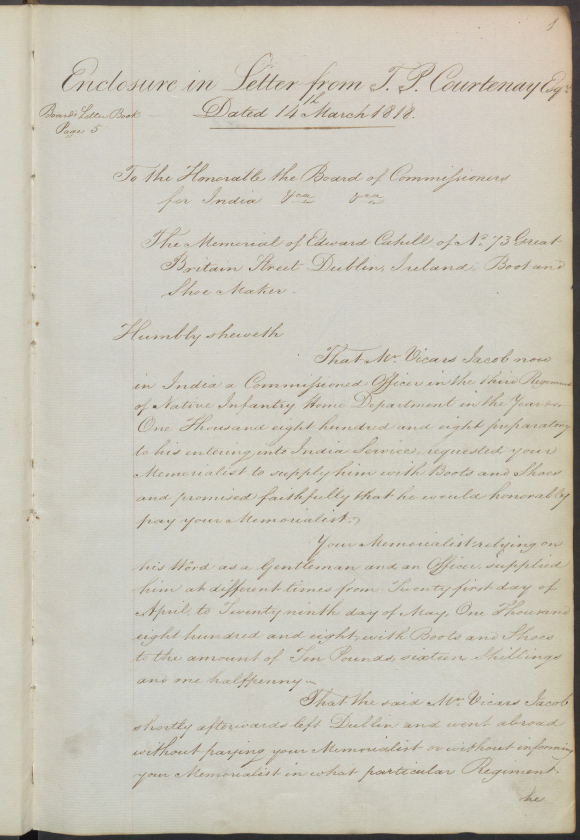 Vickers Jacob was born in Queen’s County Ireland in 1788.  He enrolled at Trinity College Dublin in 1806 before joining the East India Company’s Bengal Army in 1808.  Jacob took part in the Nepal War 1814-1815 with the 3rd Bengal Native Infantry.

In August 1817 Lieutenant Jacob married Anne Watson at Barrackpore.  Anne’s father and brothers were officers in the Bengal Army.  During the early years of their marriage, a son and daughter died.  Because of ‘a deep conviction that the climate of India would have bereft me of my only surviving child and of my wife’, Jacob took furlough in 1821 and travelled with Anne and their daughter to the ‘genial clime’ of New South Wales.

In early October 1822 the authorities in Australia received ‘private information’ that Jacob’s request for furlough was a cover for mercantile speculation in Sydney.  This was considered ‘subversive of military feeling and character’.  Unless Jacob could prove he hadn’t been trading, he would have to return to duty or resign from the Bengal Army. 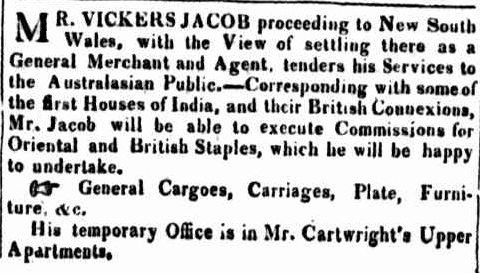 Jacob refuted the allegation.  In April 1822 he had placed an advertisement in the Hobart Town Gazette announcing his intention of going from Tasmania to settle in New South Wales as a general merchant and agent.  The ship carrying his letter of resignation did not arrive in India until 20 October.  In November 1822 Jacob was granted permission to resign from the Bengal Army with effect from 11 July 1822.

In 1823 Jacob was granted 2,000 acres of land in Newcastle next to the Hunter River which became the Knockfine estate.  In December of that year tragedy struck the Jacob family again when baby Vickers Frederick died of a teething-related fever. 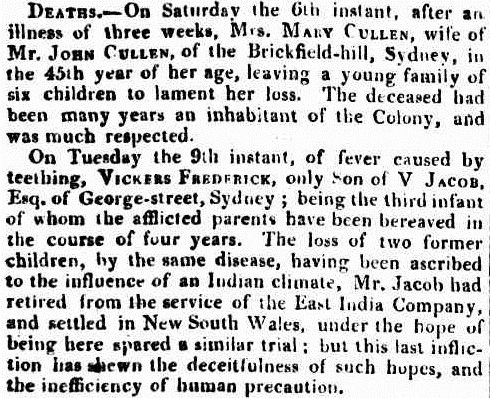 In February 1824 Amelia Australia Harriet Jacob, aged nearly 3, was a passenger for England on the ship Ocean, perhaps sent away by her grieving parents to a place they considered safe.

The ups and downs of Vickers Jacob’s eventful life in Australia can be traced through local newspapers, including a challenge to fight a duel and a case of defamation of character.  He published a pamphlet entitled A letter addressed to Earl Bathurst on the subject of hardships complained of by V. Jacob ... in New South Wales.  Two more children were born there, one of whom died as a baby.

In February 1825 the Jacobs sailed for Calcutta on the Princess Charlotte.  Vickers Jacob became an indigo planter at Jessore.  He and Anne had another five children, all of whom lived to be adults.

In June 1836 the Jacobs and four of their children were about to sail from Calcutta to Hobart on the ship Boadicea when Vickers died of a fever.  Anne and her children carried on to Tasmania but on 3 October 1836 she also died.

I can't tell you if Edward Cahill ever received his money.

Our next post will tell the story of the Jacob children after their parents’ deaths.