On 17 September 1740, the East India Company’s Court of Directors in London received word that a man had returned from the dead.  That man, John Dean, miraculously survived the shipwreck of the Sussex, an East India Company ship that sank, along with its cargo, off the coast of Madagascar in March 1738.  It took Dean 16 months, most of which was spent walking across Madagascar, to find a European ship to rescue him.  That ship transported him from Madagascar to Bombay, where his story was transcribed, then sent on to the East India Company in London.

By the time Dean reached London in September 1741, a year had passed since the Company’s Court of Directors had learned of his survival, and his story had been published at least twice as a 22 page booklet.  Soon after his return, a risqué mezzotint portrait of a shirtless John Dean was also published in London, showing him standing on a rocky shoreline, holding a spear, with the Sussex sinking in the background.  This rugged image of Dean most likely increased his celebrity, and parallels were made between his story and Daniel Defoe’s book Robinson Crusoe. 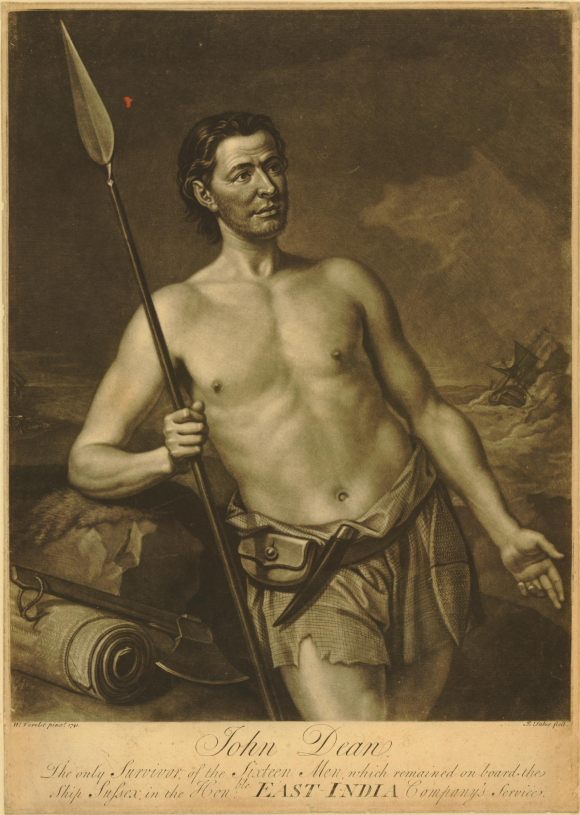 What is most interesting about John Dean’s story is that the East India Company controlled it.  On 19 September 1740, two days after the Court of Directors first received Dean’s account from Bombay, the Company’s Committee of Lawsuits put forward that 'a Bill be filed at Chancery against the Captain of the Sussex'.   John Dean’s survival had enormous value to the East India Company because Francis Gostling, the captain of the Sussex, who had also survived the shipwreck, had given a different version of events when he returned to London a few months after the Sussex sank, in the summer of 1738.  As punishment for the deaths at sea of sixteen men from his crew (one of whom was John Dean), Gostling was removed from the Company’s service, but he was absolved of losing the Sussex’s valuable cargo.  However, Dean’s account described Gostling’s actions on board the sinking ship as dishonourable, and made him out as directly contributing to the deaths of the abandoned crew.

Armed with John Dean’s story, the East India Company ruined Francis Gostling by ordering £25,000 in compensation for the Sussex’s lost cargo.  After their success at the King’s Bench in May 1743, the Company commissioned Willem Verelst on 16 June 1743 to paint not one, but three portraits of John Dean.  Two of these portraits still exist, and show a happy, healthy man, respectfully dressed in smart working class attire, carrying a hat and a walking stick in one hand and a letter of reference in the other.  They contrast with the mezzotint portrait from 1741 by showing a man who had comfortably returned to civilization.  In 1744 Dean was appointed as an elder porter at the East India Company’s Drug Warehouse, and in December 1747 he died, probably when he was in his early 40s. 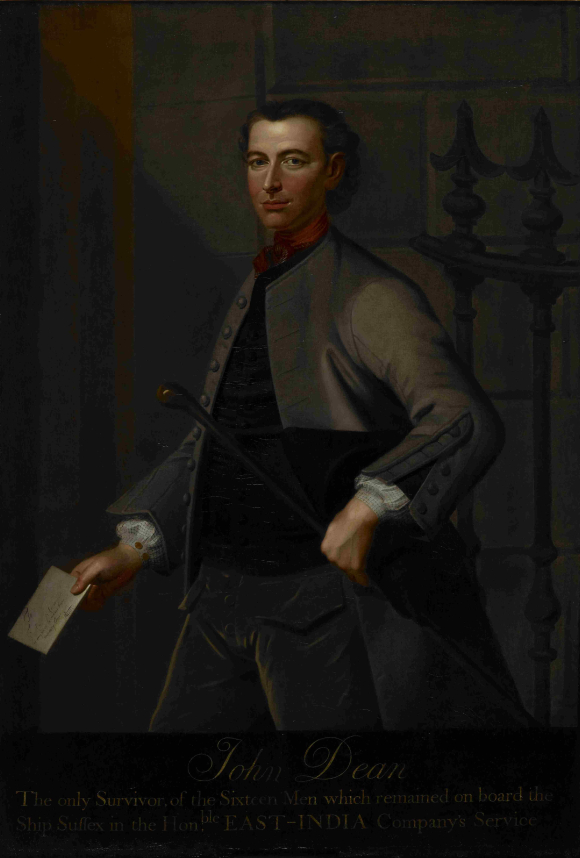 It seems to me that the portraits of John Dean say more about the East India Company than they do about the man shown in the painting.  Do you agree?