Receipts of the Late Thomas Lakin

Despite an active career as a potter, Thomas Lakin (1769-1821), whose pieces can be found in collections globally, is almost entirely absent from the written history of Staffordshire Pottery.  He is scantily mentioned in the pottery directories of the time, and was omitted completely from Simeon Shaw’s History of the Staffordshire Potteries, one of the principal texts on the history of the industry.

Lakin spent his working life in the Leeds and Staffordshire potteries.  He worked a number of years for John Davenport in the Longport glassworks, and traded in pottery under numerous titles including 'Lakin & Poole', 'Lakin & Son' and 'Lakin & Co.'.  Before his death he was a Principal Manager of the higher departments of the Leeds Pottery.  An obituary in The Staffordshire Advertiser, which asserted his reputation, noted ‘he had long been distinguished for his taste, judgement and ingenuity as a potter'.  Little is known of Lakin’s personal affairs: unlike many of his better known contemporaries, he did not leave a business or family archive.  He did however leave what is considered one of the seminal published texts on 18th century pottery techniques - Potting, enamelling and glass-staining ... Receipts of the late Thos Lakin ... with ... directions for their preparation and use in the manufacture of Porcelain Earthenware and Iron Stone China, etc. printed for Mrs Lakin (Leeds: Edward Baines, 1824).

Published post-humously by his wife Catherine, the text contains a variety of trade recipes for various enamels, coloured glazes, underglazes, glass staining, and more used by Lakin.  The preface by his wife provides us with the only published primary biographical source for Lakin, beyond newspaper clippings. 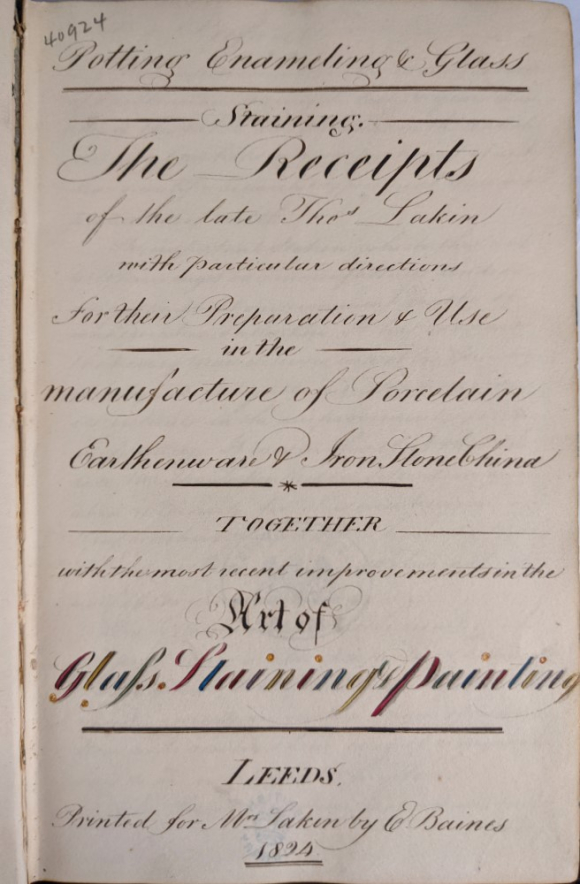 Manuscript copies of texts continued to offer an alternative to printed publications well into the 19th century.  Various factors led to their production: practice of penmanship, dissemination of ‘banned’ publications or plays, and cost or scarcity of the printed text.  Lakin’s volume was a considerable £50 on release.  Thanks to its uniqueness, and valuable content, the volume would have been in high demand and probably sold quickly.  Manuscript copies were likely made by those that either could not afford the printed version, or simply could not get their hands on it.  The British Library’s copy stands out for its remarkable penmanship and beautiful calligraphic coloured title page.

Enormous care and time was taken to produce this copy, and no doubt it would have been treasured by the owner throughout their career.  Add MS 89436 may have been copied by a potter, from a fellow potter’s printed copy.  It wasn’t unheard of for potters themselves to have well-practised penmanship, as surviving business ledgers demonstrate.  This was likely a result of extensive record keeping and the need for legible documentation within the business. 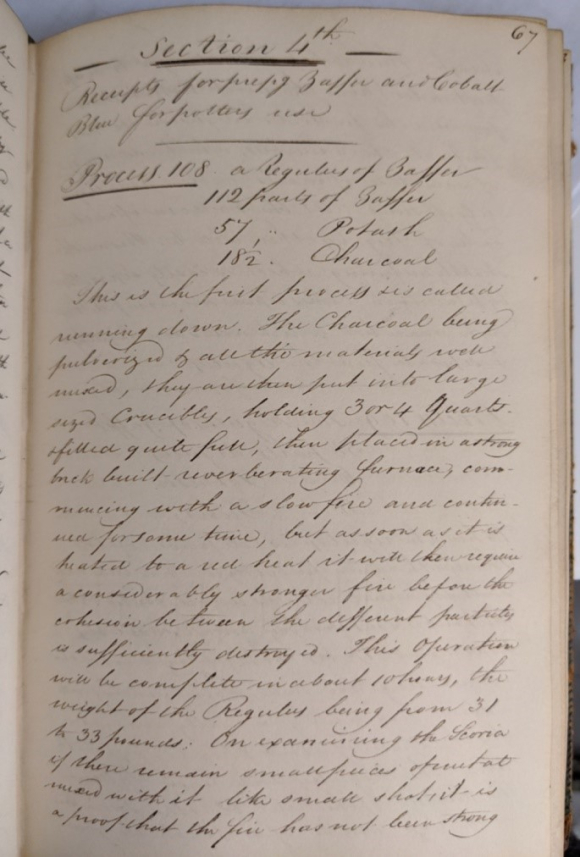 Several other manuscript copies of Lakin’s text have been up for auction in the past decade, and can be found in collections globally, including one at the Rakow Research Library, Corning Museum of Glass, in New York.

Please note that due to work-flow restrictions resulting from Covid-19 action this material may not be accessible via the reading rooms until later in the year.

Thank you to Patricia Halfpenny from the Northern Ceramic Society for her assistance in tracing information relating to Thomas Lakin and his career.

Posted by India Office Records at 09:00:00 in Arts and crafts , Business , Manuscripts , Work