Charles Foulis (c.1714 – 1783) became wealthy from his maritime career with the East India Company.  For his second voyage he served as first mate under Captain Robert Jenkins on the Harrington bound for St Helena, Bombay and China.  The ship arrived at Bombay at the end of July 1742 and had an encounter with Angria’s pirate ships whilst returning from Tellicherry.

On 18 December 1742, Captain Jenkins died of ‘a feaver and flux’ and was buried with military honours in Bombay.  Foulis took over as captain of the Harrington and sailed for China, his first voyage east of India. 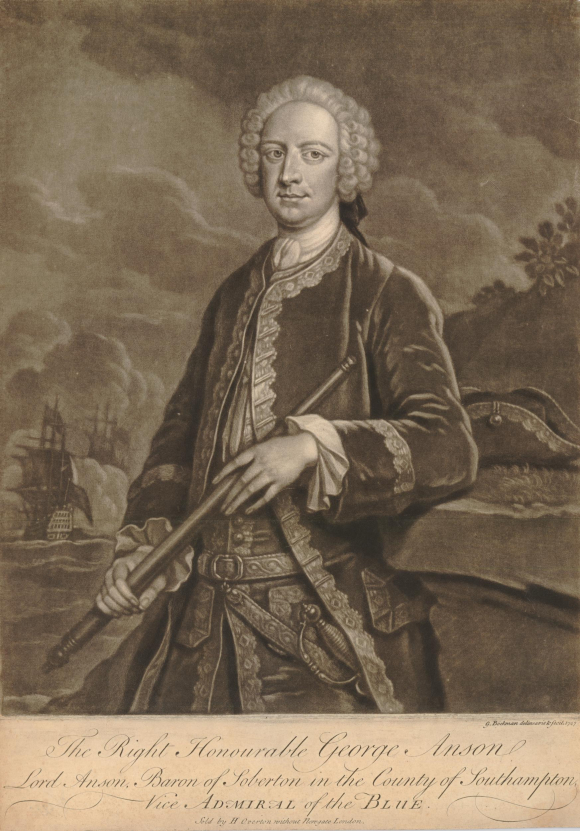 Meanwhile, Commodore George Anson (1697-1762) was continuing a voyage around the world in the Centurion, the last remaining ship of his small fleet.  When the Centurion called at Macao in November 1742, neither the Europeans nor the Chinese wanted this armed warship to approach Canton and threaten the delicate trade balance.  However, she was badly in need of repair, water and stores, and assistance was reluctantly given.  She departed on 19 April 1743, supposedly for England.  There was huge consternation when she returned nearly three months later, towing the Spanish treasure galleon Covadonga as her ‘prize’ worth about £60 million in today’s money.

Anson made his way up river towards Canton, threatening violence to the Chinese officials who tried to stop him.  When the Harrington arrived on 17 July, Captain Foulis was caught up as a pawn in the affair, torn between his respect for Anson and his responsibility to the East India Company.

Foulis went on board the Centurion to discuss the situation with Anson.  Eventually on 28-29 July the Centurion was allowed upstream and Harrington, with a local pilot aboard, guided her through the channels.  After delicate negotiations, Anson was permitted to visit Canton for a meeting with the Chinese officials.

The Centurion left China in December 1743 and the Harrington at the end of January 1744. On 4 July Anson’s magnificent procession of 32 wagons of treasure passed through the streets of London on its way to the Tower. 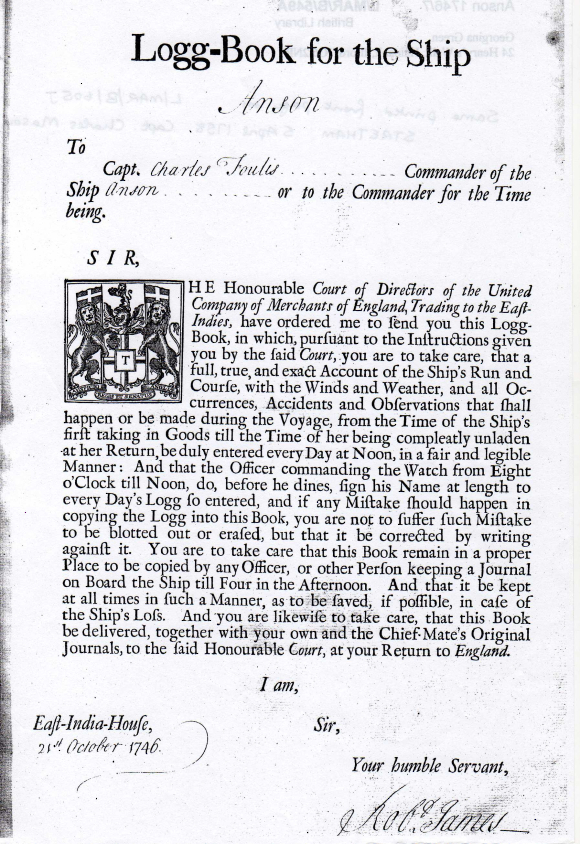 Foulis’s next voyage was in the 1746/7 season as captain of the Anson, under the management of David Crichton, a relative of his wife.  The Anson had a battle with the French outside Bombay but the captain got his papers and treasure landed before the ship was captured.  Foulis managed to return to England and on 2 November 1748 the East India Company Court of Directors agreed that Captain Foulis had ‘done his Duty and behaved like a Gallant and Discreet Officer and is Justly entitled to the Courts Favour’.

From 1750 to 1755 Foulis captained the Lord Anson for two uneventful voyages before retiring from the sea to manage voyages for the East India Company.  Between 1759 and his death in 1783 he managed 38 voyages made by 12 ships and was a significant figure in the shipping lobby.

The memorial erected by Captain Robert Preston to Charles Foulis in St.Mary’s church, Woodford, Essex, as a testimony of his gratitude. Foulis had managed three voyages which Preston made as captain and then worked with him in the City. In his will Foulis named Preston as his ‘residuary legatee and executor’. Author;'s photograph.

Charles Foulis had other connections with the East India Company: his sister Margaret married William George Freeman, a director in 1769, 1774-76 and 1778-81.  His wife had a sister who married Andrew Moffatt of Cranbrook House in Ilford, another Principal Managing Owner who was involved in shipping insurance.