Nil Darpan: the Indigo Revolt and the trial of Reverend James Long

Nil Darpan (sometimes Nil Durpan) or The Indigo Planting Mirror was a Bengali play written by Dinabandhu Mitra in 1858-59.  The drama was written in the context of social agitation in Bengal, known as the Indigo Revolt.  The play examines the treatment of the Indian peasantry or ryots by the indigo planters.  It was first published in 1860. 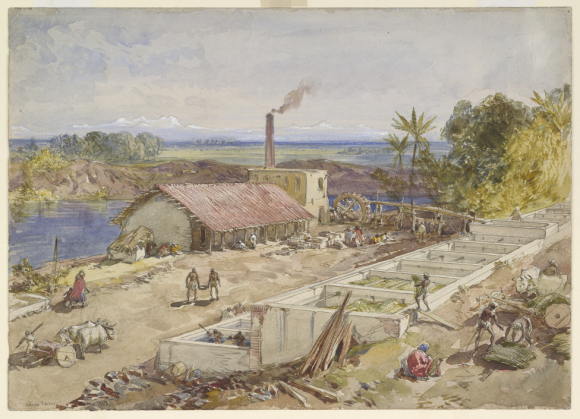 Mitra’s play shone a light on the behaviour of certain European indigo planters, the worst excesses of which were further exposed by an official report of the 1861 Indigo Commission.  Ryots were forced to plant indigo, a crop which was in demand by the international textile industry but which degraded the land.  They had to take out loans and sell the crop to planters at fixed (low) prices, forcing them into a cycle of debt and economic dependence that was often enforced with violence.  The play reflected the realities of intimidation, exploitation, violence (including sexual violence), and lack of redress through the judicial system experienced by many in Bengal. 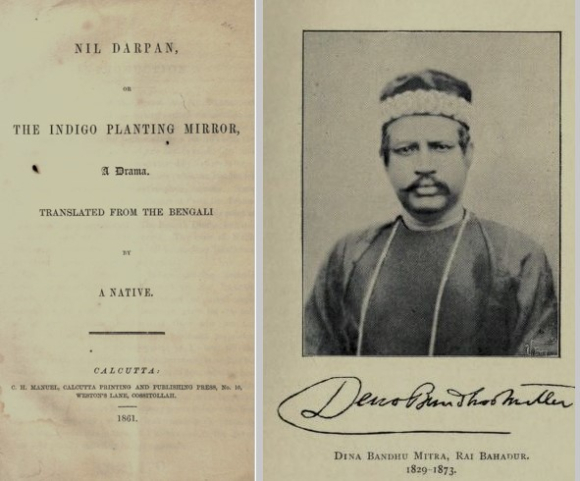 Title page of Nil Darpan and portrait of Dinabandhu Mitra from Ramtanu Lahiri, Brahman and reformer. A history of the renaissance in Bengal, from the Bengali ... Edited by Sir Roper Lethbridge (London : Swan Sonnenschein & Co, 1907.), p.94.

In 1861 Mitra sent a copy of his play to Reverend James Long, who had run the Church Missionary Society school in Calcutta where Mitra was educated.  James Long, an Anglo-Irish priest, had been in India since 1840, and was particularly interested in what he called the ‘Native Press’.  Long had previously assembled lists of books and other publications in Bengali.  He believed that vernacular writings were an important barometer of the feelings of Indian people, and that they had often been ignored by those in power.  Long mentioned the play to William Scott Seton Karr, Secretary to the Government of Bengal, who in turn brought it to the attention of Lieutenant Governor Sir John Peter Grant.  Grant requested an English translation of Nil Darpan, which Long arranged, and which was almost certainly carried out by Michael Madhusudan Dutt.  The translation was edited by Long who also provided his own introduction.  500 copies were printed, and some copies were distributed by Long in official Government envelopes.  This action appeared to give the translation official sanction. 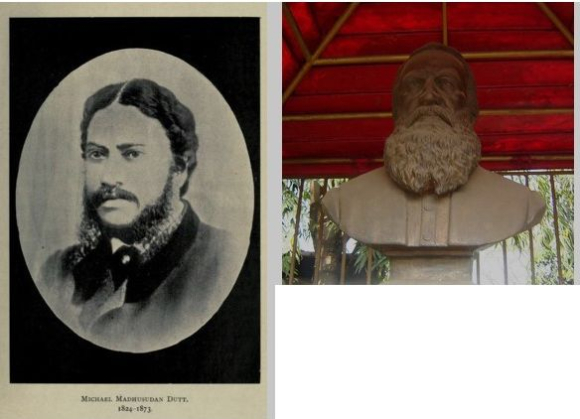 Portrait of Michael Madhusudan Dutt from Ramtanu Lahiri, Brahman and reformer, p.30, and bust of James Long in Kolkata via Wikimedia Commons

Nil Darpan quickly reached the attention of both the indigo planters and the pro-planter press, who felt that they had been defamed by the play, and by Long’s introduction and by Mitra’s original preface.  As a result James Long was taken to court by Walter Brett, proprietor of the Englishman newspaper, together with the Landholders Association of British India and the general body of indigo planters.  The trial for libel took place in July 1861, and there was much sympathy expressed for James Long.  Yet he was found guilty, sentenced to one month in jail and fined 1,000 rupees.  The Bengali author Kaliprasanna Singha immediately paid the fine on Long’s behalf.

Nil Darpan was the first play to be staged commercially at the National Theatre in Calcutta; it was one of a number of politicised plays which provoked the Government of India into enacting restrictive censorship measures on Indian theatre via the 1876 Dramatic Performances Act.

Further Reading:
Nil Darpan or the Indigo Planting Mirror, A Drama. Translated from the Bengali by A Native (Calcutta: C.H. Manuel, 1861)
Statement of the Rev. J. Long His Connection With The Nil Darpan (Calcutta: Sanders, Cox and Co., 1861)
Claire Pamment (2009) 'Police of Pig and Sheep: Representations of the White Sahib and the construction of theatre censorship in colonial India', South Asian Popular Culture, 7:3, 233-245.
Geoffrey A. Oddie, Missionaries, Rebellion and Protonationalism: James Long of Bengal 1814-87 (London: Routledge, 1999)