The truth behind the myth: the colonial legacy of the Mayflower voyage - No.1 English colonisation of North America prior to 1620

This month marks a pivotal moment in English colonial and North American history: the 400th anniversary of the Mayflower sailing to North America in 1620.

Approximately one third of the passengers on board the Mayflower were English separatists who wanted to make a living in the profitable ‘New World’ away from religious restrictions.  They are known euphemistically as the Pilgrim Fathers of the United States of America, and are mythologised today as symbols of religious freedom.  They have become a central theme in the United States of America’s founding story.

The settlers founded Plymouth Colony in what is now Massachusetts and what was then Wampanoag land.  Massasoit, Sachem of the Wampanoags, had no choice but to sign a peace treaty with the invaders.

Jamestown and Plymouth were the first of many English colonies in North America and the Caribbean.  This was driven by the pursuit of economic profit and the fight for influence amidst other European powers.

The consequences of colonisation were grave for everybody who was not European. Native Americans were devastated by disease, the buying out of land and violent conflict. The racial enslavement and transportation of African people to work on colonial plantations became endemic and horribly profitable.

The English Virginia Company established the colony of Jamestown in 1607 on Paspahegh land.  The Powhatan Confederacy, a collective of Algonquian peoples that included the Paspahegh, resisted English colonial establishment and expansion for many years in the Anglo-Powhatan Wars (1610-1646).

The settlers defeated the Powhatan Confederacy but they did struggle in the early years of the colony.  No crops were planted in the first year and supply ships either brought more hungry settlers or failed to arrive at all.   There were many fatalities from 1609 to 1610, a period known as the starving time.  The colony desperately needed more settlers. This is an advert printed by the Virginia Company calling for people to sign up, giving no indication that Jamestown was on the brink of collapse. 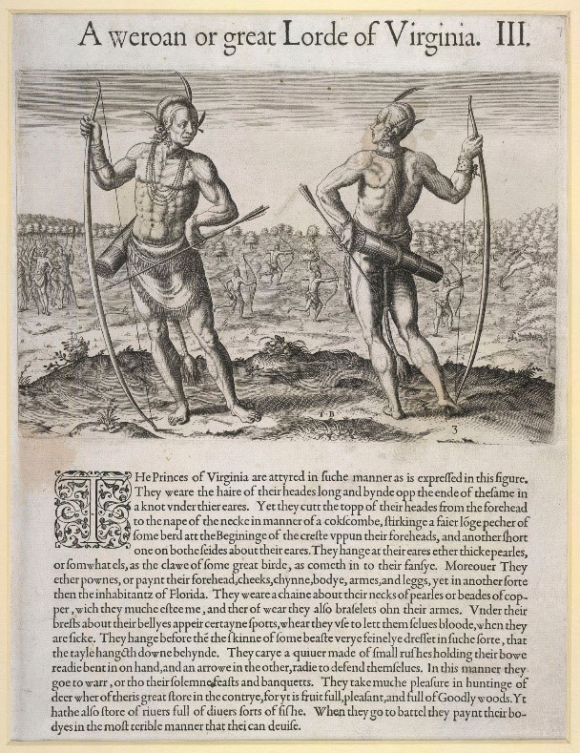 ‘A weroan or great Lorde of Virginia’ 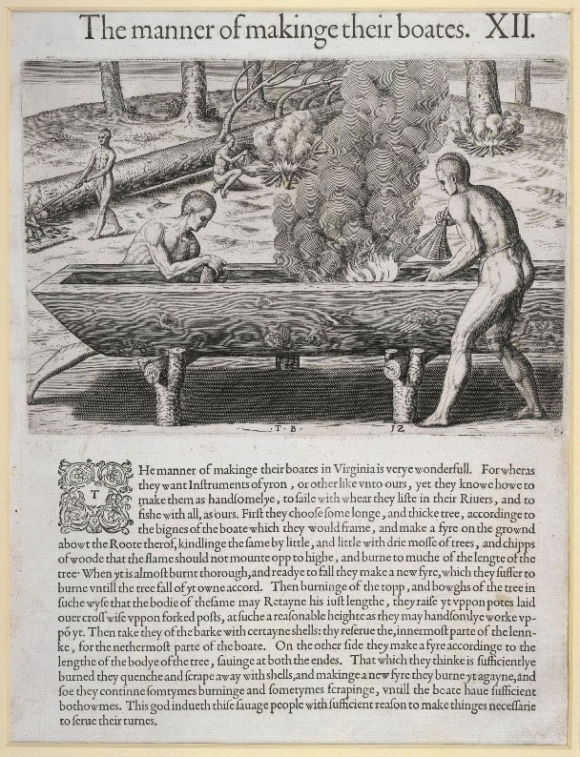 ‘The manner of making their boates’

Engravings by Theodor de Bry in Thomas Harriot’s A Briefe and True Report of the New Found Land of Virginia, 1590. C.38.i.18

These engravings are the only surviving visual record of the Native Americans encountered by England’s first colonists.

Although stylised, they depict the Secota, Roanoke and Pomeiooc peoples of North-Carolina and their settlements. De Bry based his engravings on the watercolours of John White, a member of the short-lived Roanoke Colony, who drew from life the Carolina Algonquian people in that area.

These images played a central role in shaping European conceptions about the so-called New World and its inhabitants. 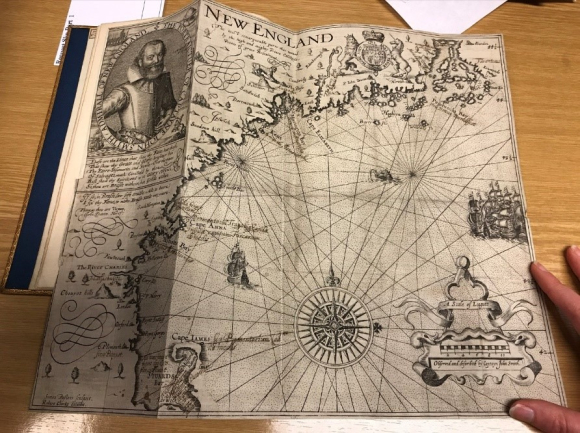 This map, first printed in 1616, marks the first time that New England was called New England.

It was named by John Smith, the coloniser famous for his association with Matoaka, the Powhatan woman who was captured and held for ransom by colonists during the First Anglo-Powhatan War.  She is known today as Pocahontas.

John Smith’s book is essentially a promotional brochure about North America’s riches and natural resources.  The then Prince Charles (who became Charles I in 1626) renamed the Native American places with English alternatives, erasing their people’s history and culture.