Eliza Armstrong – Another Piece of the Puzzle

This blog post provides a modest update to curator Margaret Makepeace’s 2012 and 2016 blog posts on Untold Lives - Whatever happened to Eliza Armstrong? and Eliza Armstrong – still elusive!  Readers are encouraged to refresh their memory of Margaret’s posts before reading on here.

A letter from Eliza West (formerly Armstrong) to W. T. Stead, dated 6 March 1906, and sent from 50 Gladstone Street, Hebburn, confirms Eliza’s marriage to Henry George West, and his death, which left Eliza struggling to support her family and searching for ways to generate the necessary income to keep her household afloat. 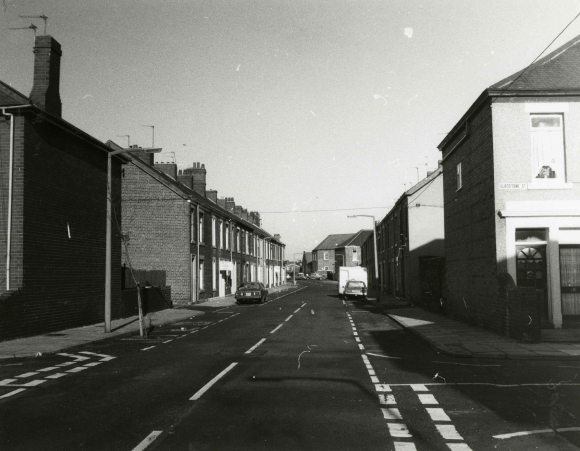 That W. T. Stead and Eliza were still in touch may come as a surprise to those familiar with ‘The Maiden Tribute of Modern Babylon’, Stead’s series of sensational, New Journalism articles, published in the Pall Mall Gazette in 1885, in an attempt to end the deadlock in Parliament over the Criminal Law Amendment Act.  Stead was vilified (and rightly so) for his part in the abduction of Eliza, in his overzealous campaign to prove that a child could be bought for £5 and sold into sex slavery on the streets of London.

In Eliza’s letter to Stead she thanks him for his ‘kind and welcome letter’ and the gift of a ‘butafull’ [sic] book.  There has clearly been some delay between Stead’s last missive and Eliza’s reply because she apologises for not responding sooner and tells Stead she has been ill.  The letter is familiar in tone, and in it Eliza informs Stead that she has made up her mind to take in lodgers: ‘for a liveing as I realy don’t know what else to do [sic]’.  She signs off ‘thanking you so much for all your kindness I never will forget nor cease to remember all your kindness to us'.

In the same year a letter on Salvation-Army-Headquarters-headed-paper and dated 31 October begins with the subject line:

The letter is from Commissioner Adelaide Cox and begins ‘My dear Chief’ (presumably, therefore, it is addressed to Bramwell Booth).  Commissioner Cox informs Booth that she has ‘instructed Staff-Captain Salt to continue to visit this woman [Eliza West] once a week until she has really turned her present difficult corner’.

The letter goes on to say: ‘We are taking up the question of the children at our Headquarters here.  There are five; and the idea is to find Homes for the three middle children.  Mrs West is willing for this.  At present, there are two lodgers in the house, who pay weekly, and all would be well in this direction, but for the fact that Mrs West has something the matter with her leg, and is obliged to attend the Infirmary'.

Between March and October Eliza must have moved quickly to bring in the lodgers mentioned both in her letter to Stead and that of Adelaide Cox’s letter to Bramwell Booth.  And by 1911 it would seem that the Army had succeeded also, in placing those ‘three middle children’ elsewhere, because William Frederick, Sybil Primrose and Phyllis Irene are not listed as members of Eliza’s new household with partner Samuel O’Donnell in the 1911 census return. 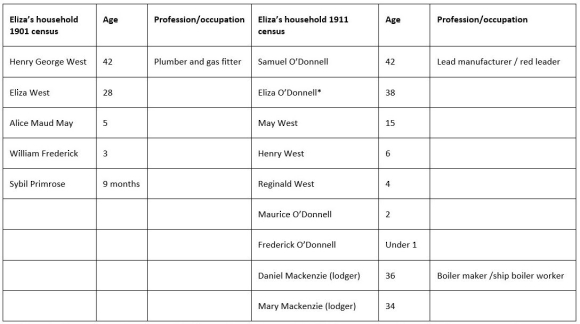 * The 1911 census records ‘children born alive to present marriage’, and sub-divides that information between ‘total children born alive’, ‘children still living’ and ‘children who have died’.  Tellingly, and indeed poignantly, in Eliza’s column, under total children born alive the number 9 is written; children still living 8; children who have died 1; and then each number is struck-through as the realisation is made that only O’Donnell’s children count here, and so the numbers 3, 2, 1 are placed above the original numbers recorded.  This however, again, is not quite accurate, as Eliza’s dead child is Reginald Ladas West (born 1894, died 1897).  Nevertheless, this semi-legible, deleted information tells us that Eliza lost at least 1 child in her lifetime, and at the time of the 1911 census was survived by at least 8.  A recent search of the General Register Office birth index adds two more children born to Eliza and Samuel, Minnie and Norman O’Donnell.