The Oddfellows friendly society and Barbados

‘It is the positive duty of every man who earns his bread by the labour of his hands to provide against times of sickness, for the decent burial of himself and his wife, and endeavour to secure something for the widow and orphans he may leave behind him.’

This quote is taken from the 1870 rule book of the Oddfellows friendly society.  The Independent Order of Oddfellows, Manchester Unity, was established in 1810.  It grew to be the largest friendly society, with branches in nearly every town in England and Wales, plus many in Ireland and Scotland, and also overseas in the West Indies, Gibraltar, Malta, South Africa, Australia, New Zealand, Canada, America, and Constantinople. 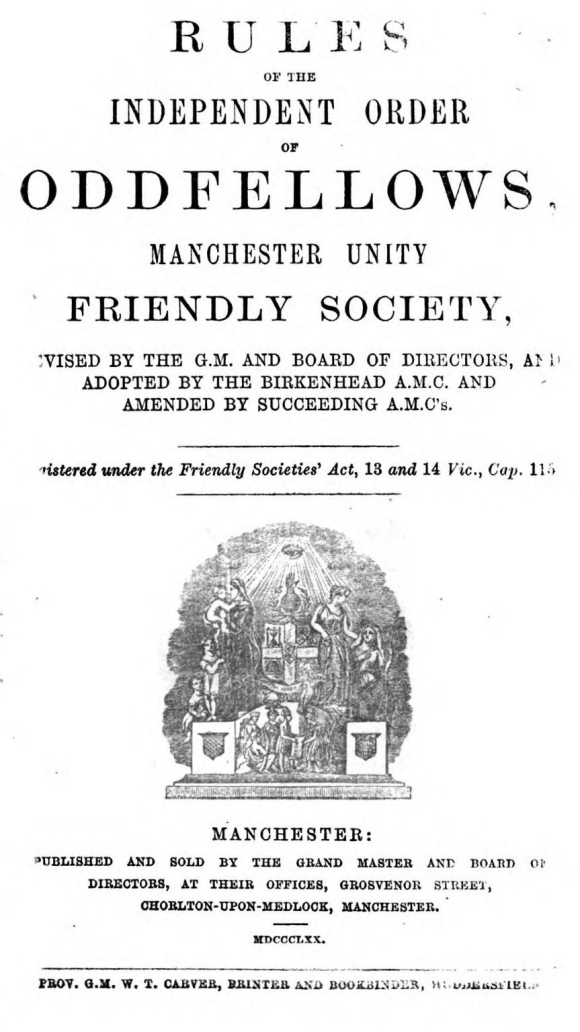 Rules of the Independent Order of Oddfellows, Manchester Unity (Manchester, 1870)

Members paid contributions to local lodges and received benefits in time of need.  Any member could reach the highest position in the Order.  Religion was held sacred in lodge meetings and politics were not discussed.  Good works were encouraged – visiting the sick, helping widows and orphans, increasing happiness and knowledge.  Self-respect and self-dependence were watchwords of the Order.

In 1901 The Oddfellows’ Magazine featured Brother John Christopher Cordle, a black Barbadian, in its Colonial Roll of Honour.  It stated that the Manchester Unity recognised no distinctions of creed or colour: ‘We appraise the man by his worth and his work’.

John Christopher Cordle was born in Bridgetown in 1827.  His teacher at elementary school was Edward Archer.  Cordle became an assistant at that school and then a schoolmaster in Barbados.  Edward Archer was Corresponding Secretary for the Oddfellows Barbados District.  Cordle joined the St Michael Lodge in 1853, becoming assistant secretary.  He served two terms as Grand Master in 1859 and 1860, and was Corresponding Secretary for 30 years.  His work for the Oddfellows included assisting the widows and orphans’ fund and travelling to Jamaica and Trinidad to help open new lodges.

Oddfellows’ lodges hosted convivial gatherings.  There are several reports in The Oddfellows’ Magazine of the anniversary dinners of the Barbados St Michael’s Lodge.  On 29 May 1867, the Clarence Hotel hosted ‘one of the best dinners which has ever been given by the Oddfellows in this Island’.  About 70 attended, including two or three merchants, Masonic brothers, and several city gentlemen.  Cordle acted as chairman, and he called upon the West Indies press for help in extending the principles and benefits of the Order to the young men of the islands.

There are also indications in Oddfellows annual reports of conflict within the Barbados lodge.  At a Special District Meeting held on 23 November 1886 it was resolved that Brother Cordle should be expelled from the Order, and his name erased from the Merit Board, for embezzling funds, misappropriating goods, suppressing correspondence, and giving false statements.  However the directors in England ordered that the resolution be rescinded and the case reheard after Cordle had been informed of the specific charges against him.

Cordle was expelled again for the same reasons by a resolution of the Barbados District Meeting held on 9 March 1888. Once more this was overturned in England, with the District ordered to consider and adjudicate upon the claim of £6 12s 6d made by Brother Cordle against it.

Further reading:
Rules of the Independent Order of Oddfellows, Manchester Unity (Manchester, 1870)
The Oddfellows’ Magazine and annual reports - digitised copies from the archive of the Order available via Oddfellows website
Our story about Oddfellow Edwin Thomas Smith