A fatal pub brawl and its consequences

The saying goes that fate can turn on a sixpence, but for my great-great-grandfather John Barlow (1843-1884) it turned on a pint.  On 29 December 1884, John was having a drink after work in the Farmer’s Arms, New Ferry, when he accidentally picked up the wrong pint of beer and drank from it.  The pint’s owner, John Whitehouse, alias Mantle, objected and an argument quickly escalated into a fight. 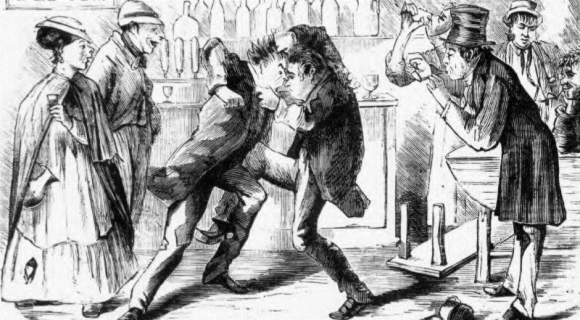 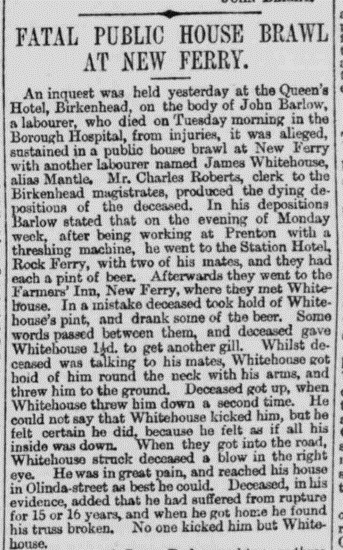 John’s death was obviously catastrophic for the family.  His wife Elizabeth was left widowed with three children – George Robert (16), John Robert (13), and Mary Jane (10).  Her parents Robert and Mary Gore lived in the same street and were a source of support, but her father died in 1887.  In the same year Elizabeth married a shoemaker called William Tasker.  In family legend, Tasker was a villain whose behaviour towards his step-children caused the boys to leave home.  But is there any evidence to support this?

In June 1886, George Robert Barlow joined the King’s Own Royal Lancaster Regiment, but that was before his mother’s remarriage.  By 1894 he was in Kirkee, Poona, where he married a nurse Rhoda Mary Moss.  By 1901, he was in Liverpool and described himself as a retired soldier.  He died in 1905, leaving his wife and one surviving son.

My great-grandfather John Robert Barlow (1871-1959) certainly left home to join the Merchant Navy, though the exact date is unclear.  Merchant Navy records are not centralised and it is difficult to track down individuals if you don’t know the name of the ship.  He is certainly absent from the 1891 and 1901 censuses; unlike ships in British ports, ships at sea were not enumerated.  Various documents describe him as a ‘trimmer’ (stoker), and later a marine fireman, so he clearly worked in the engine room of steam ships.  His death certificate describes him as a retired boatswain.  He married in Kirkdale in 1905 when he was 33, his bride Emma Gibbons was 18.

And what of William Tasker?  The son of Daniel Tasker, shoemaker of Hoole, Chester, and his wife Mary, he was baptised in Chester in 1842.  His year of birth fluctuates in the records; on his marriage certificate in 1887, Tasker describes himself as 37 rather than 44.  Lying about your age is one thing, but did great-great-grandma Elizabeth really marry a wrong un’?  Possibly.  There is a William Tasker, shoemaker of Hoole, Chester, who appears in the Calendar of Prisoners Sent for Trial in both 1870 and 1871.  He was found guilty of riot in August 1870 after attacking Hoole Police Station, and sentenced to 14 days' hard labour at Chester Castle.  He was then found guilty of larceny in September 1871, having stolen ‘a coat, a pair of trowsers and a medal…’ from his father, and was sentenced to 12 months' hard labour.  Included are details of Tasker’s record of previous convictions for drunkenness, ‘breaches of Militia discipline’, assaulting police, and in May 1868 he served 14 days for stealing a duck.