George Poland & Son – furriers to the rich, friends to the poor

When furrier George Poland died at his home in Oxford Street, London, on 10 May 1860 at the age of 64, many local shops closed as a sign of respect.  Obituaries described him as a benevolent guardian to the poor, diligent, courteous and conscientious.

George Poland was churchwarden for Marylebone at the time of his death.  He was first elected to serve on the St Marylebone Vestry in 1850.  He joked in 1852 that he had lived for 50 years in one house in Oxford Street, but was only two years old as a vestry man.

In September 1853 George Poland joined a committee appointed by the St Marylebone Board of Guardians to enquire into cholera and scarlet fever and the sanitary condition of the crowded and populous local districts.  Poland was also a director of the Marylebone Association for Improving the Dwellings of the Industrious Classes which was incorporated by Royal Charter in April 1854. 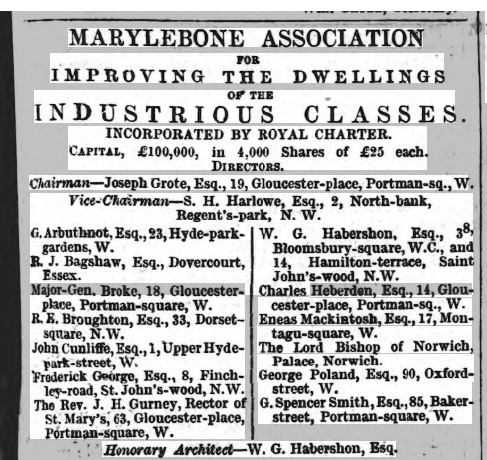 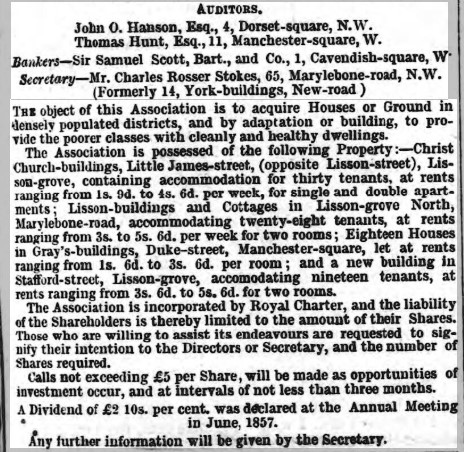 The aim of the Association was to acquire houses or ground in densely populated districts and provide clean and healthy dwellings for the poor by converting existing properties or building new ones.   Money was raised from shareholders and dividends paid.

By 1858 the Association owned a number of properties, many around Lisson Grove, a very poor area of Marylebone with appalling sanitary conditions.  Rents varied from 1s 3d to 5s 6d per week.  Some accommodation provided water and a sink in each room, whilst others had sculleries, dust shafts, and coppers and flat roofs for washing and drying clothes.  One of the properties acquired by the Association was Lisson Cottages.  The old houses were renovated in 1855 and let as apartments.  The Cottages are now listed artisans’ dwellings. 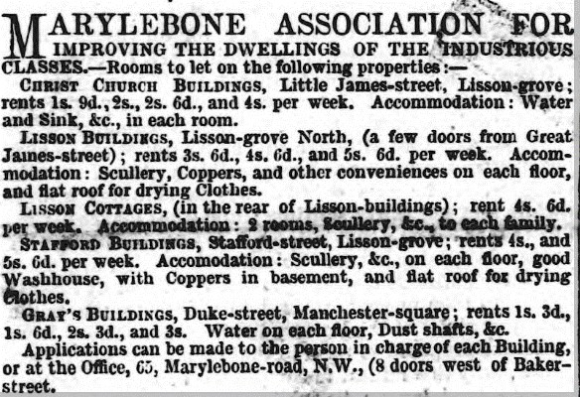 George Poland and his wife Jane (née Minton) had five sons, but two died as babies.  Charles became a quantity surveyor.  Edward worked as shopman and clerk to his father.  In 1847 Edward incurred debts for a diamond ring and the hire of horses and gigs.  He was admonished at the Insolvent Debtors’ Court for idleness, folly and vain extravagance.  Edward died in 1851 at the age of 27.

The eldest son George Arthur Poland, born in 1820, followed his father into the fur trade, apart from a brief period around 1850 when he worked as a straw hat maker.  He married Hetty Rosina Esquilant in 1842 and they had eleven children, two of whom died in infancy. By 1880, George Poland & Son were furriers to the Royal family.

George Arthur Poland also followed his father in his commitment to public duty.  He was a member of the St Marylebone Vestry for 23 years, serving as chairman and churchwarden.  He represented St Marylebone on the Metropolitan Board of Works and was involved in Liberal politics in the borough.  Poland was Master of the Worshipful Company of Painter-Stainers in 1875.

Poland supported many local social improvement initiatives with both time and money.  When he died in 1883, his obituary in the Marylebone Mercury praised him as ‘an honest, warm-hearted, upright man; an excellent and willing worker; a friend to the poor. To know him was to love him; and the respect and esteem in which he was held by all classes are strong testimony to his excellence and worth’.