Making gunpowder after the English method

A letter dated 2 February 1725 from the East India Company directors in London to their Council in Bengal contained sections on the manufacture and use of gunpowder.  The Company was concerned about the quality of saltpetre being sent from Bengal and sent instructions on how to improve it.  They were also keen to stop gunpowder being wasted.

Saltpetre was a key ingredient in the manufacture of gunpowder.  The Company directors complained that the quality of saltpetre arriving in England had been declining for some years.  Very little had been bought at the London sale in March 1724, so they had decided to analyse samples from the 600 bags of saltpetre which had arrived from Bengal on the Lethieullier, Bridgewater, and Sarum.  The man who refracted the saltpetre reported that, although it looked white and good, there was a quantity of salt left in it.  The directors concluded that the Bengal Council must have employed unskilled people to refine the saltpetre, or their workers hadn’t been careful to separate the salt which was essential if good gunpowder was to be made. 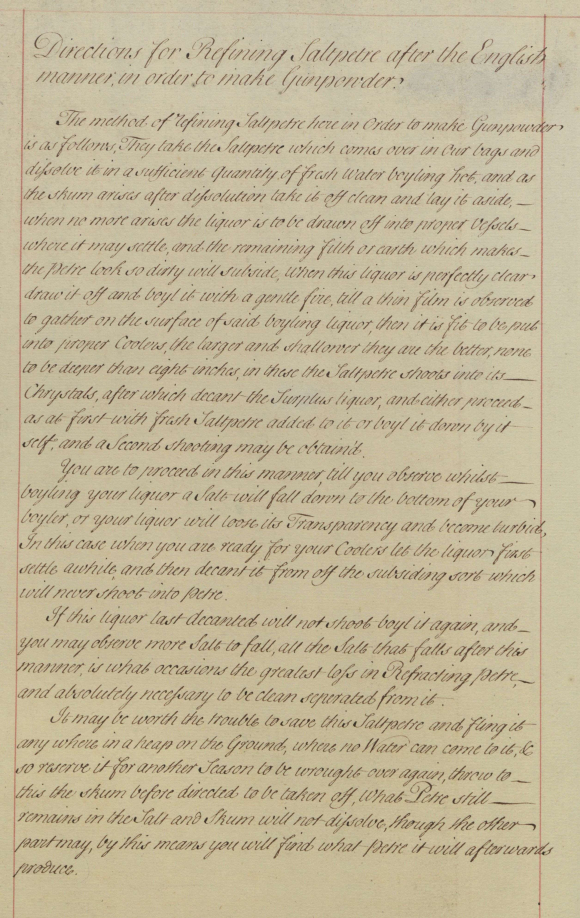 ‘Directions for Refining Saltpetre after the English manner, in order to make Gunpowder’ IOR E/3/102 f.240v

They sent ‘Directions for Refining Saltpetre after the English manner, in order to make Gunpowder’ based on advice from experts.  The workers in Bengal were to use these in a trial on a small amount of saltpetre to see how they got on.
• Dissolve the saltpetre in fresh boiling water.
• As the scum rises, take it off and put it to one side.
• When no more scum rises, draw off the liquor into vessels and let it settle.  The remaining filth or earth which makes the petre look so dirty will sink.
• When the liquor is perfectly clear, draw it off and boil with a gentle fire until a thin film can be seen on the surface.
• Pour into large shallow coolers, no more than eight inches deep.  The saltpetre will shoot into crystals.
• Decant any surplus liquor.  Either start again with fresh saltpetre added to it or boil it down by itself for a second shooting.

View of Fort St George, Madras, 1782, with a ship firing guns © The Trustees of the British Museum

The letter also reported complaints from the owners of East India ships about the great expense of gunpowder lavished on salutes.  The directors ruled:
• No more than nine guns were to be fired when Company ships arrived at a port in India and had a fort to salute.  The forts were to return salutes with only that number.
• Nine guns when captains first came onshore from Europe or were leaving for Europe. Just seven guns for saluting captains at any other time.
• No more than five guns to answer country ships (except foreigners).
• No more than nine guns when the Governor, members of Council, or other Company personnel came on board or left the ship.
• Be as frugal as possible when using gunpowder at festivals, funerals and other occasions.