You’ve heard of highwaymen, but what about highwaywomen?  Female highway robbers definitely existed in the 17th and 18th centuries.  They worked alone, as part of a gang, or with husbands.  They appear in the records of county session court trials and in other sources like the Newgate Calendar.  They were notorious for cross-dressing.

Highwaywomen also appear in broadside ballads, a major part of popular news culture at that time.  Printed cheaply on a single sheet, they focussed on sensational tales of murder, doomed lovers, cheating husbands, wonders, famous military victories, highwaymen and, occasionally, highwaywomen.  The so-called unladylike behaviour and cross-dressing of highwaywomen caused quite the scandal.  Most of the time, the ballads are written from the perspective of the highwaywoman on the scaffold, about to confess and be hanged. 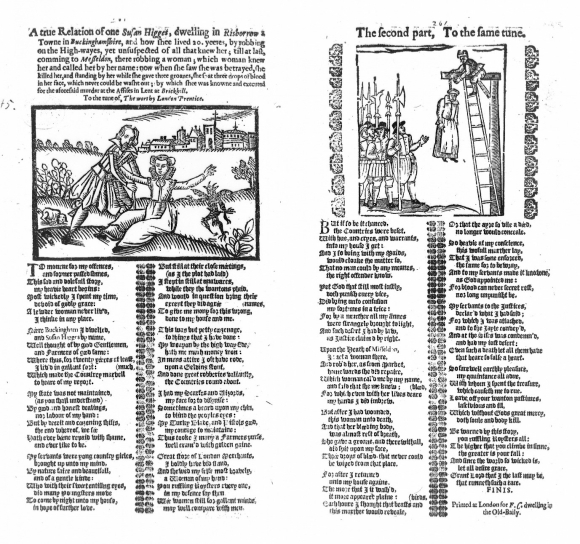 In A True Relation of One Susan Higges and The Sorrowfull Complaint of Susan Higges (two ballads about the same person printed in 1640), Susan Higges commits highway robbery for twenty years while dressed as a man, before being caught and executed.  Her shocking exploits are described as acts of gallantry and female boldness:
'In mens attire I oft have rode,
upon a Gelding stout,
and done great robberies valiantly,
the countries round about'.

Retribution comes when she robs a woman who recognises her.  Higges stabs the other woman who, as she dies, spits three drops of blood at Higges’s face, which cannot be washed off.  Higges is caught and executed, but not before warning the readers: 'Be warned by this story, you ruffling roysters all: the higher that you climbe in sinne, the greater is your fall'. 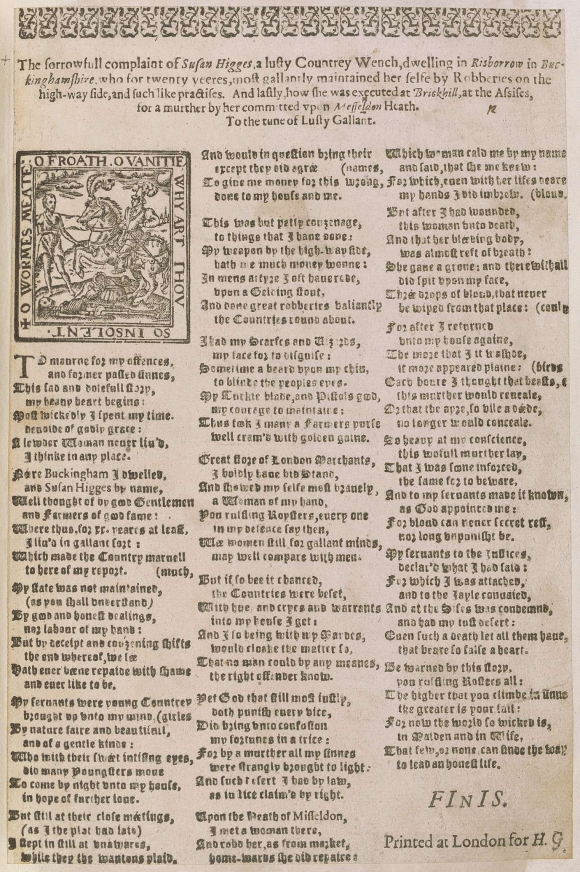 Highwaywomen rarely got away with it, as it were.  In another pair of ballads, The Female Frollick and The Female Highway Hector (1690), the female highway robber is raped by a highwayman: 'with her he did what he pleased', and this is presented as her comeuppance for committing robbery and, especially, cross-dressing. 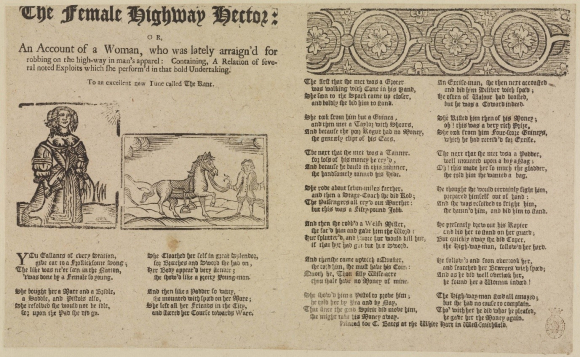 The Female Highway Hector: or, An Account of a Woman, Who Was Lately Arraign’d For Robbing on the Highway in Man’s Apparel. [London?], c.1690. National Library of Scotland, Crawford Collection, EBBA 33924.

There is an 18th-century ballad about a woman avenging herself on highwaymen, rather than committing robbery herself.  The Cook-Maid’s Garland was popular; it was printed at least five times in the 1760s and 1770s.   It tells of a 'handsome brisk cook-maid' at a Reigate inn.  Five naked gentleman arrive, having been robbed by highwaymen en route.  The cook-maid offers to take these highwaymen on for £100.  One man agrees, promising to marry her if she succeeds.  She dresses up as the devil on horseback, covering herself with soot and attaching the antlers of a stag to her head.  She terrorises the highwaymen and captures them. 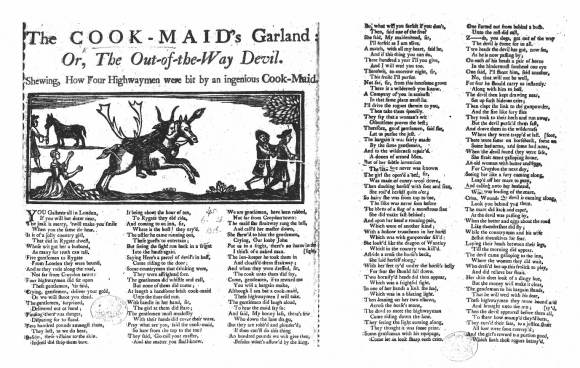 Precious few highwaywomen cried 'stand and deliver!', both in real life and in broadside ballads.  They were outnumbered by highwaymen.  They also don’t get away with it for very long.  Did these women cross-dress as a disguise or were they making a bolder statement about their gender?  We will never know but this glimpse into their lives is intriguing indeed.