Gallant, Clean and Drunk: Charles Old of the Royal Artillery

Charles Old served with the British Army in India in the mid-19th century as a gunner with the Royal Artillery.  His military discharge documents give a fascinating glimpse into the career of an ordinary soldier.  Born in Falmouth, Cornwall in 1835, Charles Old spent his early years living in Allen’s Yard, a down at heel area (later populated by self-proclaimed prostitutes).  His father Richard was a labourer and sometime ostler, and Charles followed his brother Richard into the British Army. 'A hot night in the Batteries'. Soldiers loading and firing cannons, during the Crimean War by William Simpson Shelfmark: 1780.c.6  Images Online

Charles enlisted in the 11th Battalion Royal Artillery on 18 March 1854, age 19, having previously been an outdoor servant.  He was sent to the Crimea, where he served with 5th Company H Field Battery.  He was awarded the Crimea Medal with clasps for Alma, Balaclava, Inkerman and Sebastapol, as well as the Turkish Crimea Medal.  After the Crimean war he was sent to India.  On 14 March 1858 Charles was mentioned for gallant conduct in the field before Lucknow during the Indian Uprising or ‘Indian Mutiny’.  For his actions, he received the Indian Mutiny medal, with Lucknow clasp.  This was awarded to troops under the command of Sir Colin Campbell who took part in the operations which led to the eventual surrender of Lucknow and its environs.

On 1 May 1859, Charles was transferred to 14th Brigade Royal Artillery.  On 20 September 1865 he was re-engaged for another nine years at Poona [Pune].  A physical description of him survives – he had grey eyes, light brown hair, and a fresh complexion, and stood 5 feet 9 inches tall.  He was undoubtedly a courageous soldier, but unfortunately the record of Charles’s conduct in the Army leaves something to be desired.  He appeared fourteen times in the Regimental Defaulter’s Book.  Between 1859 and 1874, he was tried by Court Martial four times, leading to four periods of imprisonment of one to two months each time.  The Regimental Board stated 'his conduct has been indifferent [he] has been guilty of many acts of Drunkenness & absence but has proved himself a gallant and clean soldier'.   The Board was at pains to point out that Charles possessed neither school certificate nor any good conduct badges.  Charles was a career soldier – he served over 21 years with the Royal Artillery in total, including two years in the Crimea and twelve years in India.  His service record reflects his many minor and not so minor run-ins with authority during that time, often through drunkenness.  He was not discharged from the Army as a result of his courts martial, which don’t in fact seem to have been that rare an occurrence in the 19th century. 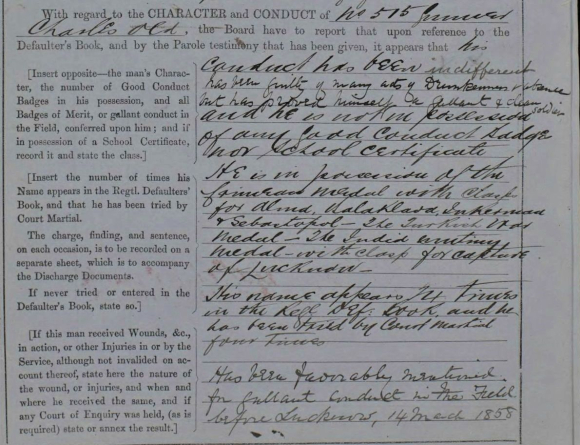 WO 97/1822/107 Discharge Documents for Charles Old, 1875, commenting on his character and conduct. © Crown Copyright Images reproduced by courtesy of The National Archives via Findmypast

By the time he left the British Army at Colchester on 9 November 1875, Charles was in the 25th Brigade Royal Artillery, regimental number 515.  He was intending to return to Truro, Cornwall, where his widowed mother Elizabeth, his brother Edward, and sister Elizabeth Marks were all living.  He moved quickly on his return home, marrying the twice-widowed Mary Jane Tuck at Tuckingmill on 13 November 1875.  He appears in the 1881 census working as a tin miner in Cambourne, and living with Mary Jane and his step-children.  Charles Old died at Truro Infirmary on 4 November 1882 of a ‘bronchial attack’, aged 47.  Perhaps those years of hard living in the Royal Artillery finally caught up with him.

Further Reading:
It can be difficult to pinpoint records relating to ancestors who served in India.  East India Company soldiers served in Presidency armies of Bengal, Bombay, and Madras.  The Indian Army was formed after the British Crown took over from the Company in 1858.  The India Office Records Military Department archive (IOR/L/MIL) holds recruitment registers, embarkation lists and muster rolls for European private soldiers and non-commissioned officers from 1753.  Documents for British officers of the East India Company armies include entry papers from 1775 and service records.

India Office Records also holds records of service for British Officers in the Indian Army, Royal Indian Navy and Indian Naval Volunteer Reserve.  Sequences are not complete, and often concern pay, leave etc.   There are few records relating to Asian personnel of the Indian Army up until 1947; these records are held in India.

Records for British Army units serving in India are found at the National Archives – this is where Charles Old’s discharge records are held.  After 1921, records are with the Ministry of Defence.