On 31 October 1866 Major Lewis Pelly, East India Company Resident in the Persian Gulf, was on the steamer Berenice, making its way south from Bushire [Bushehr] to Muscat, when the vessel was destroyed by a fire which started on board.

The ship’s company and passengers escaped in life boats.  Unable to make it to the mainland before nightfall, they stopped on the shore of Shaik Shaib Island [Sheikh Shoeyb or Lavan Island].  Having obtained some dates and water from a nearby hamlet, they bedded down for the night on the beach.

Over the next six days Pelly and the ship’s captain Lieutenant Edwin Dawes organised the rescue of 170 men, 5 women and 3 children.  The party made its way by ‘native craft’ to Nakhilu [Nokhaylo] on the mainland Persian coast opposite Shaik Shaab island, and from there to the British naval and coaling station at Bassidore [Basaidu] on the island of Qeshm.  Stopping at Khen [Kish Island], Charrack [Bandar-e-Charak] and Lingeh [Bandar-e-Lengeh], clothes, food, water and provisions were acquired along the way. 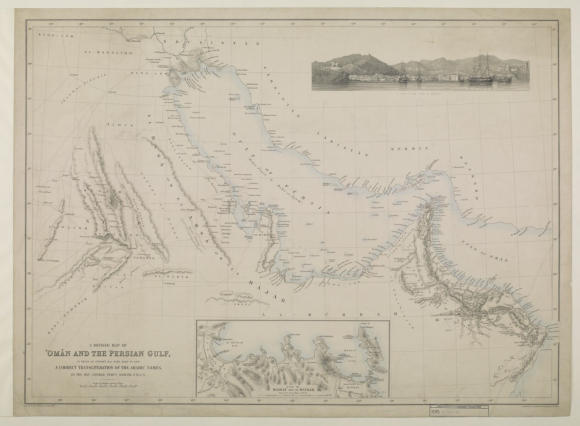 'A revised map of Omân and the Persian Gulf, in which an attempt has been made to give a correct transliteration of the Arabic names. By the Rev. George Percy Badger, F.R.G.S.’ 1871  IOR/X/3210, f 1

Unfortunately Pelly did not describe the distress and shock of the jettisoned crew and passengers, nor provide any account of the night spent on the beach.  He did, however, leave a fairly evocative account of the events of 31 October in a letter to Sir Henry Bartle Frere, then Governor of Bombay, written at Bassidore on 16 November 1866:
'I had just come on deck on the morning of the 31st Oct when the alarm was given.  The ship must have been on fire some time the smoke from the hatches was stifling immediately they were opened'.

When the crew had to resort to buckets to put out the fire, the case became hopeless.
'By nine the flames were coming up the hatches & to the awning ridges & through the scuttles.  We took to the boats & shortly afterwards she was in flames from the stem to the stern. The shell went off in about 40 minutes. We were able to take no provisions save a couple of bags of bread & about a pint of water per man... I thank God all hands are saved. But I am cleared out of all my clothes, linen, plate, crockery.' 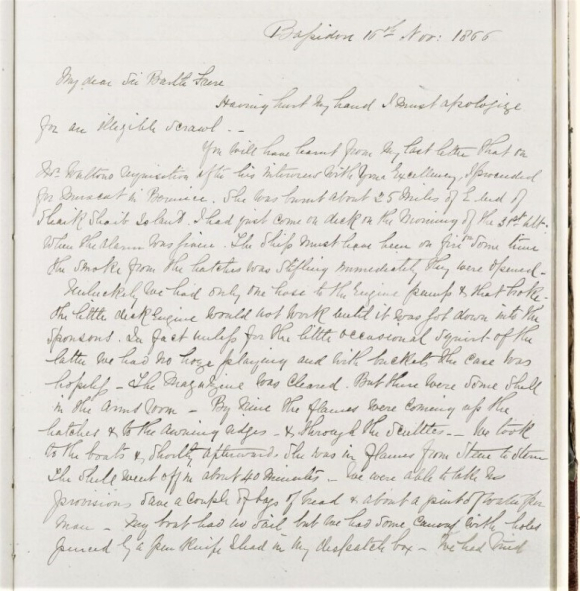 So what caused Berenice to catch fire?  Built in Glasgow for the East India Company and launched in 1837, Berenice was a naval sloop, wood paddle-steamer, which could function under sail, steam or both.  It was the Company’s first steam warship. 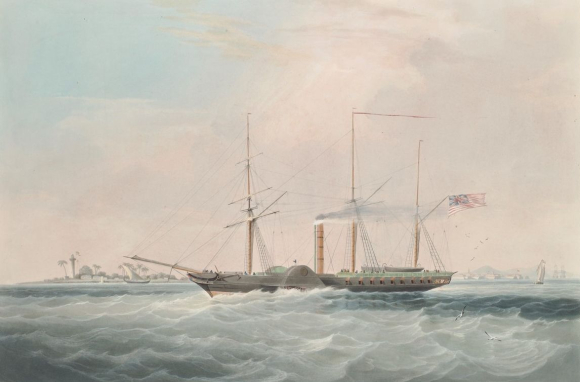 Low’s History of the Indian Navy, 1613-1863 records that the vessel saw service in numerous military conflicts, including the First Anglo-Burmese War, 1852-1853, Anglo-Persian War 1856-1857, and Second Opium War 1856-1860.  Countless troop transports, sea battles and substandard repairs must have taken their toll on her sea-worthiness.  However on 19 November Pelly wrote to Frere on the actual cause of the fire:
'...from some facts which came out in statements made by my own servants I infer that the burning of Berenice was attributable to the stewards using naked lights in the orlop deck, if not in the hold'.

One can only imagine how Pelly must have felt watching Berenice go up (and down) in flames.