In February 1915 Private Michael Brabston of the 1st Battalion Irish Guards was fighting at Givenchy.  In his breast pocket was the metal cigarette box he had received from Princess Mary's Gift Fund at Christmas.  A German bullet was on target to hit Brabston’s heart but it struck the box and he survived. 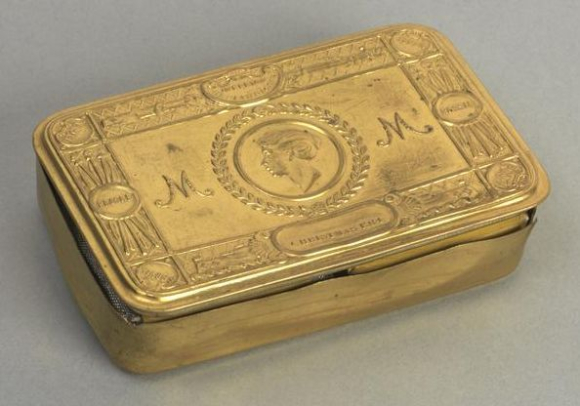 A few days later, Brabston was wounded above his left eye and he was sent to Edenbridge Hospital in Kent for treatment.  The matron forwarded the box and the bullet to Princess Mary.  A reply was received from Windsor Castle that the Princess was delighted that one of her boxes had saved a soldier’s life.  The box had been shown to the King and Queen who hoped that Private Brabston would soon recover from his wounds.

Brabston was awarded the Military Medal for his service in France.  On 17 August 1916, he was discharged from the British Army  as being no longer physically fit for war service.  He received a pension of 24 shillings per week.

Returning to his home in Clonmel Ireland, Brabston worked as a labourer before enlisting in the Irish National Army on 26 June 1922.  In May 1923, the Army was rounding-up Irish nationalists.  Sergeant Brabston was with a party of soldiers outside a dance hall at Goatenbridge when a young man approached him, hands in his pockets and whistling.  The two men exchanged greetings.  When the young man casually walked back the way he had come, Brabston became suspicious and followed him.  The man suddenly whipped out a revolver, shot Brabston in the chest at short range, and escaped into the woods.  Brabston died in the ambulance on the way to hospital.

Michael Brabston’s mother Mary was awarded a gratuity of £100, paid in 20 monthly instalments of £5.  In 1927 an application for further payment was made on her behalf.  She had relied on her son to help support the family as he used to give her all his British Army pension plus money from his wages.  The claim stated that Mary was getting old, her nerves had been shattered by the sudden death of her son, she lacked nourishing food, she suffered from rheumatism, and she was incapable of earning a living.  The authorities ruled that nothing more could be paid as she had not been totally dependent upon Michael.