Bibee Zuhoorun was one of 1.3 million Indian labourers recruited in Caribbean and Indian Ocean sugar plantations after slave-labour was abolished in the British Empire.  She migrated to Mauritius in the 1830s and on her return to India, testified in an official inquiry committee set up to investigate transgressions in the Indian indenture trade.  As the earliest voice of female indentured labourers, Zuhoorun’s testimony offers a rare insight into early migration—painting a story of deception, ill-treatment and injustice. 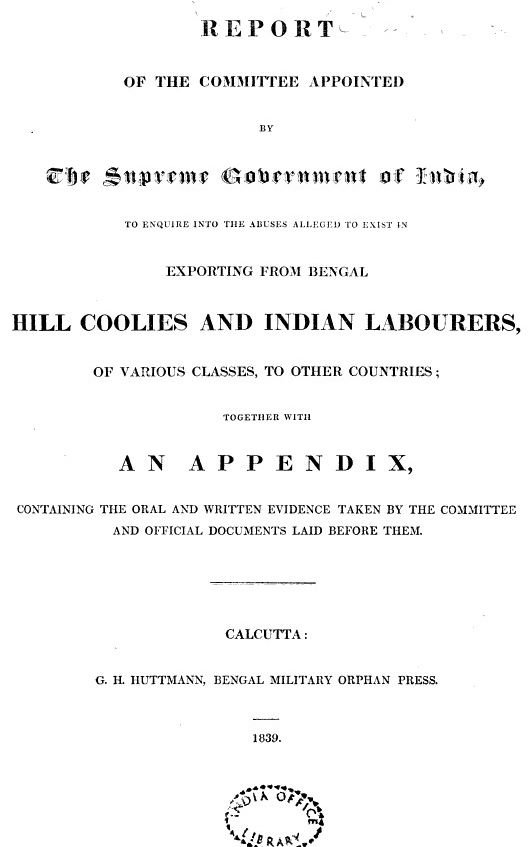 Report of the Calcutta Committee of Inquiry, 1839, containing Zuhoorun’s testimony

In Calcutta, she was persuaded by a labour-recruiter to travel to Mauritius and work as a servant.  After her departure, however, she realised she had been deceived: ‘I got no clothes given to me, nor blankets, nor brass pots’.   Nor did she receive the quality of wages, or the six-month wage advance that the recruiter had promised.

In Mauritius, she spoke of the injustice meted out to fellow labourers—a story of overworked men subjected to ill-treatment and corporal punishment.  Labourers were often confined within plantations, and denied wages if they refused to work.  She felt stuck in a foreign land with no means of returning to her homeland, urging ‘every one would leave if there was a land journey; not one would advise any of their friends to go there’. 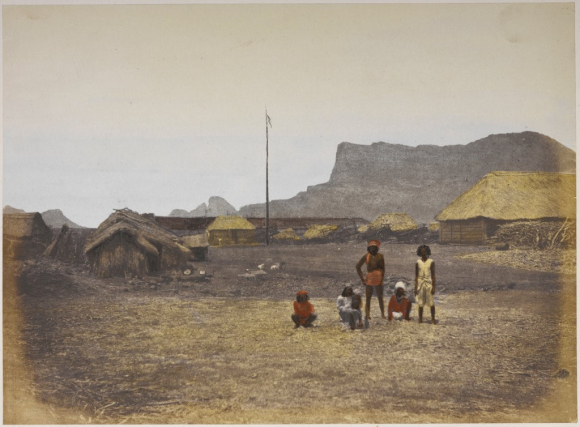 Zuhoorun’s testimony attested to the gendered experience of indentured migrants.  While men tended to cultivate and process sugar, women often worked in the households of plantation-owners.  Zuhoorun testified to ‘making salt, climbing tamarind trees to pick them, sweeping the house, and cutting grass for cattle’.  She even learnt French to communicate with her French ‘master’.

Her testimony also highlighted instances of sexual harassment and the expectation of sexual favours—a common occurrence in plantations.  Zuhoorun complained that her plantation-owner Dr. Boileau asked her to be his mistress.  She refused, saying ‘I have degraded myself by going on board ship; I would not further degrade myself’'.  Her attempts to complain to the police were met with a three-month stint at a house of correction, and then a return to Boileau’s house, where she was beaten and harassed further.  Eventually, she decided to return to India before the end of her five-year contract, even if it meant not receiving any wages for her 2.5 years of service.

Zuhoorun’s bitterness towards the indenture system is evident in her testimony.  She urged: ‘I would not return to Mauritius on any account; it is a country of slaves; […] I would rather beg my bread here’.  Overseas migration had also damaged her social position.  She implored, ‘even my mother will not drink water from my hand or eat with me’; a sign of social ostracization tied to a taboo on crossing the Indian Ocean. 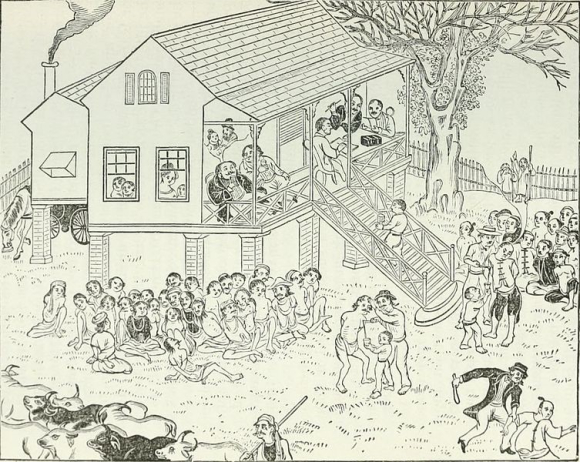 Indian and Chinese Indentured Labourers in British Guiana. Image from Edward Jenkins, The Coolie, His Rights and Wrongs (1871) from Wikimedia commons

Zuhoorun’s story is not just one of tragedy, injustice and violence, but also strength and resilience.  She not only resisted Boileau’s advances and ended her contract early, but even complained to his wife, sacrificing her livelihood at the same time.  Although relegated to the footnotes of history, her testimony remains the earliest account of a female indentured migrant, characterised by its strength, detail and passionate criticism of the indenture system.

Read the testimonies of Zuhoorun and other indentured migrants in Letter from Secretary to Government of India to Committee on Exportation of Hill Coolies: Report of Committee and Evidence. Parliamentary Papers (House of Commons) 1841, Vol. 16, No. 45.