Isabella Keiskamma Frend was born 5 July 1829 at Fort Wiltshire, Cape of Good Hope (South Africa).  She was the daughter of Captain Albert Frend, HM 55th Regiment and his wife Ellen, née Last.  Her unusual middle name was taken from the Keiskamma River on which the Fort stood. 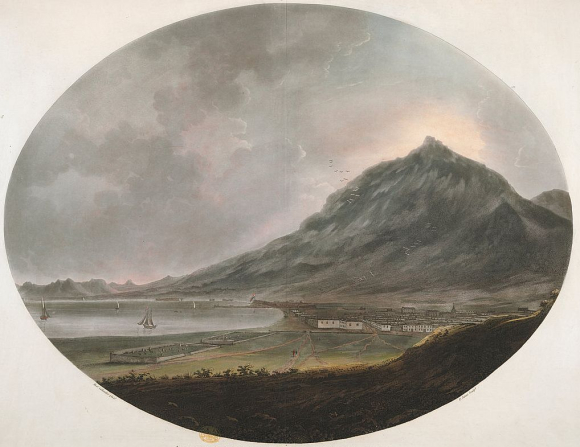 As an Army family the Frends moved around frequently.  Their first child Ellen was born in Essex in 1815, and their two sons Albert and John were born in Jersey in 1815 and 1819 respectively.  Albert senior and Ellen didn’t marry until 14 August 1820 in Shrewsbury, Shropshire, where their daughter Jane was born in September that year.  The family then travelled to the Cape of Good Hope where daughters Hester Tew (1823), Eliza (1824), Maria (1826) and Isabella herself were all born.  By 1832 the family were in India and their final child, Sarah, was born in Bellary, Madras, on 22 August 1832.

On 12 February 1833 tragedy struck the family.  Albert died in Bellary, Madras, and Ellen, who had set out with her children for Madras intending to return home to England, died on route at Cuddapah on 25 April 1833.  The nine Frend children found themselves orphaned, with only the eldest daughter Ellen already married and in a position to care for her siblings.

Isabella and Sarah were the only two not to remain in India.  They were adopted by Joseph and Emily Clulow and by 1841 were living in St Andrew, Devon.  Joseph passed away shortly afterwards and Emily moved with Isabella and Sarah to Brighton where both girls married.

Isabella married for a second time on 5 April 1862 in Gloucestershire to widower Francis Lawford, a Captain in the Madras Army.  As well as their children from their first marriages, they had a further three children together: Margaret Frances Isabella born in 1863; Bessie Ellen born 1865, died 1866; and Lionel Francis born in 1867.  Francis died on 28 August 1870, after eight years of marriage.  As a Madras Army Officer he subscribed to the Madras Military Fund Pension scheme.  Following his death not only did Isabella receive an annual pension, but so did all of Francis’s children who at the time of his death were unmarried (in the case of the girls) or under the age of 21 (in the case of the boys).

Isabella continued to live in Gloucestershire and on 15 September 1880 she married for a third time to the Baptist Minister William Millard.  There were no children from this marriage, which lasted for twelve years until William’s death in 1892.

After William's death Isabella was re-admitted to the Madras Military Fund as Captain Lawford’s widow.  Isabella moved to Ilfracombe, Devon where she remained until her own death on 14 September 1902.