Richard Walpole and the East India Company at sea

Writer Horace Walpole had a cousin Richard who served as an East India Company maritime officer from 1744-1757.  Richard Walpole had at least two encounters with hostile French shipping whilst serving as a Company officer, exemplifying the dangers faced by merchant ships even when as heavily armed as East Indiamen.

During Walpole’s first voyage as 6th mate and purser in the Augusta, his ship captured the French vessel Baronette on 21 October 1747.

Whilst commanding the Houghton in March 1757, Walpole was involved in an action near the Cape of Good Hope.  His journal of the voyage records how on the afternoon of 9 March the East Indiamen Houghton, Suffolk and Godolphin were approached by two unidentified ships.  Walpole immediately began to clear his ship in readiness for battle.  The three East Indiamen steered away but were followed.  Walpole had everyone on board prepared for action all night. 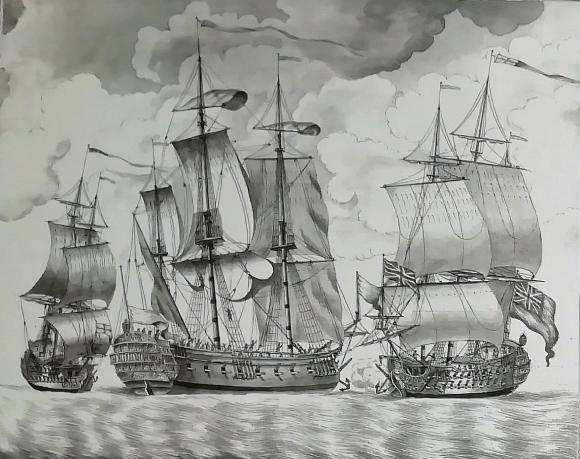 At 8 am the unknown ships hoisted French colours.   The larger of the two shot at the English ships and the Suffolk returned fire.   After a short exchange, the ‘warm engagement’ ceased as the ships found themselves positioned outside the bearings of each other’s guns.  The French made to sail westward but were pursued by the East Indiamen.  They then tacked and came in close to the English ships and ‘a very smart fire’ was maintained by both sides.  At noon the French sailed away, probably bound for Mauritius.  Walpole recorded: ‘Every Body behaved during the whole Engagement with great Courage & Resolution; several of the Shot from the large Ship reached us, & four of them have lodged…(thank God) no Body hurt’.

The three ships reached the UK without further incident.  Captain William Wilson of the Suffolk reported that the officers and sailors ‘behaved with all the Bravery and Intrepidity peculiar to our English seamen’.  He and his fellow captains asked the Company to honour a promise to reward mariners for their response to enemy attack.

Some of the crew of the Houghton, Suffolk and Godolphin did not reach their homes at the end of this eventful voyage.  They were pressed by the Royal Navy and found themselves on board HMS Hussar.

The French did defeat Richard Walpole five years later.  The ship Walpole for which he was Principal Managing Owner was captured off Ceylon by two French men of war and a frigate on 20 September 1762 on its outward journey to Bengal, laden mainly with cloth.  Captain Parson Fenner and some of the crew ended up at the Cape of Good Hope, others at Mauritius.  The East India Company decided that the capture was not through any misconduct of Fenner or his officers, but entirely owing to the superior force of the enemy which they were ‘utterly unable to resist’.  Richard Walpole was given permission by the Company to build a new ship for Fenner on the bottom of the Walpole.