A 19th century tale of adultery

Major William Down of the Madras Army was a subscriber to the Madras Military Fund Pension scheme.  He was invalided in service and sent home in February 1859.  He died on 20 April 1868 aged 46.  On 1 September 1847 he had married Christian Tripp Hutchinson (1823-1898) and the couple had ten children, aged between five and nineteen at the time of their father’s death.

Three of his children found themselves caught up in or at the centre of scandals including allegations of adultery and involvement in criminal enterprises.

The first was Arabella Almond Down, fifth child of William and Christian, born in Secunderabad, Madras on 13 December 1852.  In May 1869 Arabella was referenced in the divorce proceedings of Samuel George Hulse and Catherine Theresa Ingram.  Samuel Hulse filed for divorce from his wife of four years on the grounds of serial adultery.  They had married in Bengal in 1866 when Samuel was 21 and Catherine was just 15.  Samuel returned to England September 1868 leaving his wife behind in Delhi, where it was alleged she commenced a relationship with another man, returning with him to England in March 1869 and leaving her husband for good shortly afterwards.  During the proceedings, Theresa (as she preferred to be known) submitted a counter claim accusing Samuel of also having committed adultery with Arabella Down.  The court dismissed this counter-claim and the divorce was granted on the grounds of adultery by Samuel’s wife. 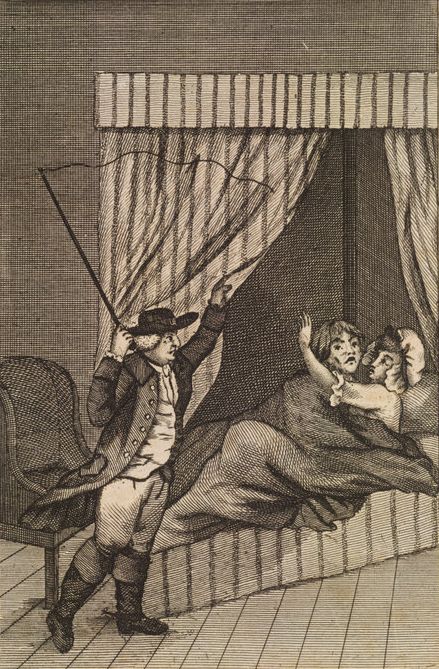 Two lovers in bed caught in the act by a husband holding a whip - from R. Gill, A new collection of trials for adultery (London, 1799) P.C.19.a.11 volume 2, frontispiece Images Online

There may however have been some truth to the counter claim made by Theresa Hulse.  On 23 December 1871 Arabella Georgina Catherine Hulse was born in Simcoe, Ontario, Canada, the child of Samuel George Hulse and Arabella Almond Down,  I have been unable to find a marriage record for Samuel and Arabella.  The couple had two more children: Samuel Rusk Ramsay born in October 1873 and Violet born September 1876 but dying a month later.

Samuel and Arabella’s relationship appears to have dissolved quite rapidly, as on 22 March 1879 Arabella Down was married in Manhattan USA to Dr Gordon Edward Corbould.  At the time of their marriage Arabella and Gordon already had a son, Gordon Bruce, born in October 1877, and Arabella was six months pregnant with their second child.  Following the marriage they moved to New Westminster, British Columbia, where they had five more children between 1881 and 1890.  Arabella died in New Westminster on 20 February 1894.

Samuel Hulse kept custody of his two surviving children and they were still in Simcoe, Ontario at the time of the 1881 Census of Canada.  All three seem to disappear from official records shortly afterwards, although London probate records show that Samuel senior died on 22 August 1896 in Belize, British Honduras.  What happened to his children remains a mystery to me.  Can anyone help?

Watch out for a story of forgery, deceit and more alleged adultery featuring two more of the Down family siblings, Eva and Charles.