Edith E. Cuthell was a well-known author in the late 19th and early 20th centuries.  Many of her stories drew on her experiences as the wife of a British Army officer serving in India.  In ‘Up to the Hills’, published in 1893, Mrs Cuthell described a long march involving women and children. 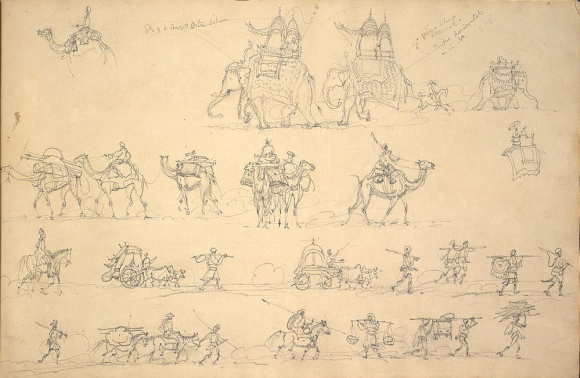 Sketches of a march with elephants, camels, horsemen and Indian servants from Robert Place Smith, Sketchbook of 27 drawings of views made during a march from Benares to Bareilly 1814 British Library WD 312, f.25v Images Online

Troops moving between garrisons in India took a route march when there was no available railway.  They set off very early each morning in order to reach the shelter of the next camping place before the full heat of the day struck.  About ten miles were completed each day.  Troops never marched on a Sunday.

At the head of the march were the soldiers - a kaleidoscope of blue, red, green, and khaki uniforms.  They were followed by bullock carts carrying the married women and children.  Mrs Cuthell commented: ‘The soldier’s wife in India is a great grumbler, notwithstanding the comforts, and even luxuries, she enjoys in that land of extra pay and of many and cheap servants’.  However the wives might have had fair reason to complain when being jolted for days in bullock carts slowly creaking through the dust.  At the bottom of the carts was a layer of boxes with a couple of mattresses on top, all covered by thatched straw.  From time to time a wheel fell off, and pots, pans, baggage and children went flying in all directions.

Next came the sick and lame, laid on straw in bullock carts or carried along in canvas-hooded doolies. They were tended by a doctor and an apothecary. 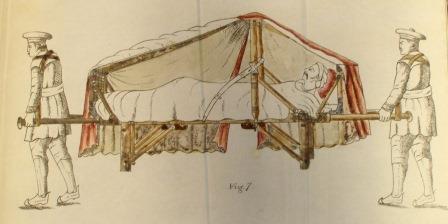 Baggage animals accompanied the column.  Elephants and camels were loaded with tents, and mules carried the soldiers’ kit bags.  Cleared camping places were available at regular intervals by the roadside with trees planted by the government to shade them.  Tents were quickly erected on arrival, including one used as a hospital.  Indian cooks built fires and earth stoves to perform ’culinary wonders’.  Some of the soldiers played cards, whilst many took the opportunity to sleep.

An officer’s wife would enjoy the luxury of a tent serving as a dressing and sitting room with servants to attend her and provide a hot bath, and a separate bedroom tent furnished with a folding camp bed and washstand.  There was also a mess tent with waiters freshly dressed in clean white outfits and turbans after their march.

The camp awoke whilst it was still dark.  Fires were lit using straw bedding to ward off the bitter cold.  At the sound of a bugle, all the tents were taken down in readiness to begin the new day’s march.

Edith’s husband was Thomas George Cuthell, an officer in the 38th Foot and then the 13th Husssars.  The couple had married in Bedfordshire in 1873.  They had three daughters and one son, all born in England.  Mildred Frances, known as Millie, died at Lucknow in April 1878 aged 2¾ after suffering from convulsions.  Thomas retired from the Army in 1885 and the family lived on the Isle of Wight and later in Surrey.  Edith published books for adults and children as well as contributing articles to magazines.