James Naish was Chief of the English East India Company Council in Canton (Guangzhou), China.  He kept a diary of ‘Observations and Transactions’ which includes a description of Chinese New Year celebrations in January and February 1730/31. 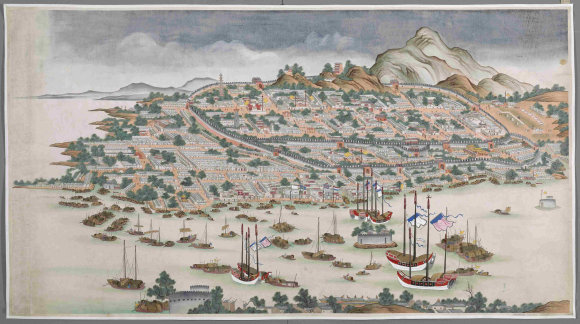 27th January This being the first day of the new Moon & of the new Year, great ceremony is observed by the Mandarins & all other persons in their visits and congratulations thereupon.

30th January The Foyen or Vice Roy of the Province haveing signified his approbation of all sorts of diversions, costly Pageants are daily carried about the streets, in which the State & Power of Mandarins in high stations are represented, Country & Low life well describ’d, & the seasons curiously discover’d.  At night the streets are finely illuminated, & a vast variety of fire works continually seen in the Air from all parts of the City.

17th February The Foyen hath Affixed a chop in several places which putts an end to the long continued festival, & likewise directs all persons to return to their professions & employments, the Mandarins of Justice may punish such Offenders as have been guilty of any crimes since new years day, from which time to this no sort of punishment could have been inflicted upon any criminal whatever. 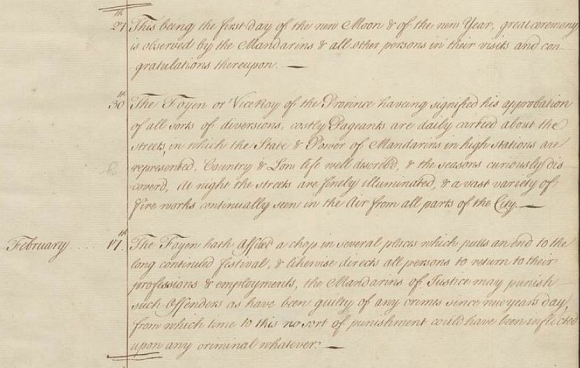 James Naish was a very experienced China trade merchant.  He was supercargo on East India Company voyages to Canton in 1716, 1722, 1725 and 1730, and had also worked for the Ostend Company.  In 1730-1731 he spent a whole year at Canton instead of returning to England between trading seasons, the only English East India Company supercargo ever to do this.   Naish wrote reports on the tea industry during his extended stay.

When China merchant George Arbuthnot arrived back in England in the summer of 1731, he accused Naish of fraud.  Arbuthnot claimed that Naish had understated the amount of money received for goods sold in China and inflated the cost of commodities purchased there.  Naish was also said to have imported a large quantity of gold bullion from China without paying duty. The East India Company decided that Naish had broken his covenant and considered sending a ship to seize his unlicensed goods and bring him to England under arrest.  Naish’s wife Hester was desperate to prevent this.  She had been given a letter of attorney by her husband in 1729 authorising her to conduct his business, so she agreed to deposit £20,000 with the Company to allow Naish to return as a free man.

The Company began proceedings in the Court of Exchequer.  Naish protested his innocence and lodged counter-claims against the Company in the courts.

The legal process dragged on for years.  When Naish made his will in 1736, he left everything to Hester because the size of his estate was uncertain, dependent upon the outcome of several pending law suits.  He said the family had long experience of Hester’s skilful management of his affairs whilst he was abroad and he trusted her to divide the estate as he would wish.  Although Naish did not die until January 1757, this will was the one submitted for probate.