We’re returning to the ship New Year’s Gift to share some more of the instructions it carried.  This time we’re looking at rules for record-keeping in Asia in the earliest days of the East India Company and the use of codes in correspondence.

The Company merchants in the fleet of four ships which sailed from England in March 1613/14 were told before they sailed that they were expected to record their work with care and ‘exquisiteness’. They were provided with –
• Four pairs of ‘faire bookes,’ i.e. journals and ledgers
• Four large ‘industriall’ or day books
• Books for expenses
• Books for copies of letters
• Large ruled sheets of paper for making copies of the journals
• Eight reams of paper, large and small
• Ink
• Penknives
• Quills
• Hard wax

More books had been sent to the Company’s trading post in Bantam in the ship Concord. 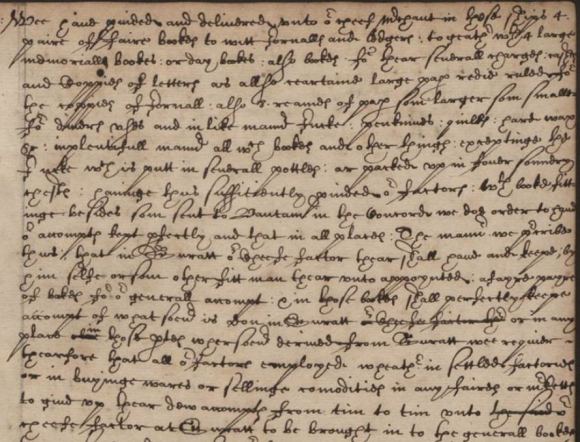 Having provided ample supplies of stationery, the Company expected accounts to be kept ‘perfectly’ in all places.  The chief factor at Surat, or someone else appointed to the task, was to keep a fair pair of books for the Company general account.  All factors, whether working at settled factories or employed buying and selling commodities in fairs or markets, were to give their accounts from time to time to the chief factor at Surat so they could be brought into the general books there.  But all factors were also to send to London a copy of their journal and the balance of their ledger whenever Company ships sailed for England.  The chief factor was to send by every shipping a verbatim copy of his journal written on the large ruled paper being supplied.  Since all copies sent would be the same size, they could in future be bound together in one volume in London.  The Company also expected to receive the balance of the chief’s ledger from time to time, and an exact copy of his ledger once a year.

Changes in personnel at Surat must not lead to alterations in the methods of record-keeping.  No factor was to take away Company books as had happened in the past.  Completed books were to be sealed up and sent to London, with copies made to retain in the factory if required.  Local coinage and weights should be used in the accounts, with an explanation provided for London.

Similar instructions were given for the factory at Bantam, with a central record taking in information sent by merchants working away from base.  The Company advised all factors to write down immediately everything that happened – ‘our memory at the best hand is very slippery’.  Moreover, sickness and death could strike at any time.

If factors wrote home about an important matter using a dangerous or doubtful conveyance and passage, the Company asked them to write the letters, or at least ‘poynts of moment’, in ‘caracters’ i.e. a code or cipher.  Then, if the letters were intercepted, trade secrets would not be disclosed and cause damage to the Company.  A copy of the cipher was included with the instructions.