An Alternative to the Suez Canal?

The opening of the Suez Canal in 1868 created a new trade route between Europe and Asia as an alternative to the long sea journey around the Cape of Good Hope, but a different route had also been given serious consideration. 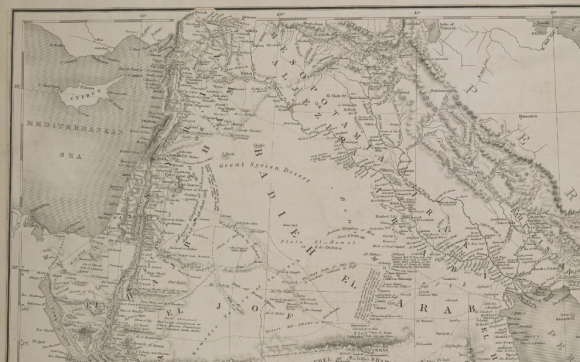 The Isthmus of Suez and the River Euphrates in a detail from a map of Arabia by William Henry Plate (1847), IOR/X/3205, India Office Records, British Library

A survey of the Isthmus of Suez in 1798 had incorrectly shown the Red Sea to be 8.5m higher than the Mediterranean, an idea finally put to rest by a more accurate survey carried out by British army officer Captain Francis Rawdon Chesney in 1830.  Chesney’s recommendation however was for the establishment of a permanent steam-boat service on the Euphrates River as part of an overland route linking the Persian Gulf to the Mediterranean, and in 1834 the UK Parliament voted a grant of £20,000 towards determining the navigability of the Euphrates during the winter months. 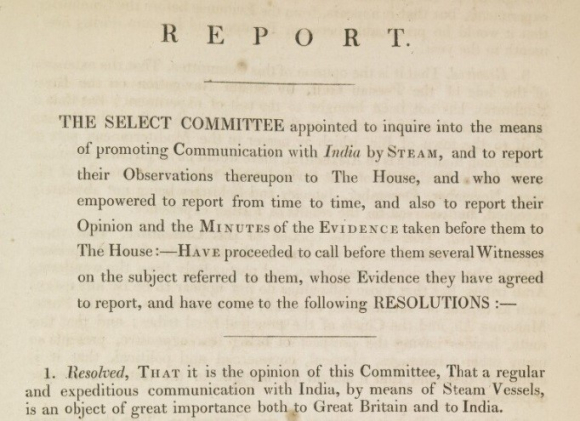 The crew of the Euphrates Expedition, commanded by Chesney, departed England on 31 January 1835.  Also on board, in pieces that could be assembled when needed, were the two iron steam vessels the expedition would use, named Tigris and Euphrates in honour of the rivers they would be traversing.  The expedition arrived at Sowedich [Samandağ, modern-day Turkey] in April and then travelled overland to Bir [Birecik, Turkey] on the Euphrates, where the steamers were assembled and the survey commenced. 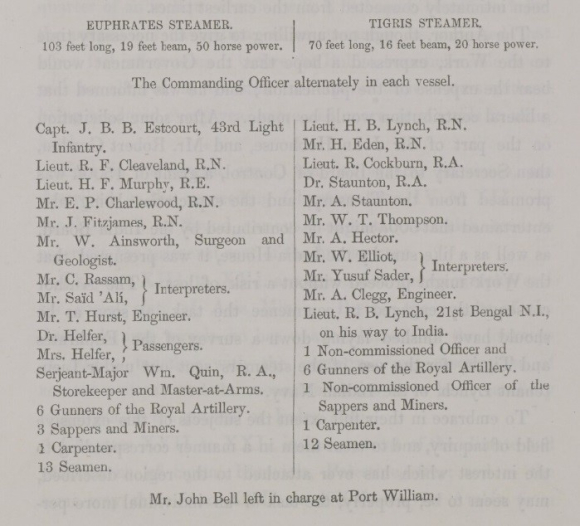 Dimensions and crew of each of the steam vessels, from Chesney’s official report of the expedition (1850), IOL.1947.c.142, India Office Records, British Library

The expedition was not without problems, including an initial reluctance by the East India Company to be involved in a project which had been planned “without [their] participation or concurrence” (IOR/L/MAR/C/573, f. 29).  There were also various delays caused by vital passage or supplies being denied by Ottoman officials, despite permission having been obtained from the Government of the Ottoman Empire, which the British suspected to be intentional obstructionism with possible Russian influence.  But the most tragic setback came when the steamers were caught in a storm that, in the words of one of the officers, “came hurling on towards us with the most fearful rapidity” (IOR/L/MAR/C/574, ff. 183-85).  The crew of the Euphrates were able to secure her to the bank, but the Tigris was blown back into the centre of the river and sank within minutes, with the loss of 20 men. 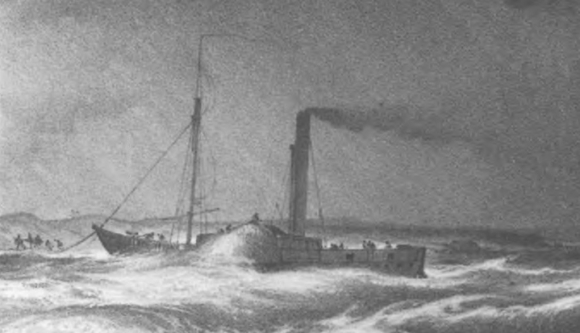 Drawing of the Tigris immediately before her sinking, by Captain James Bucknall Estcourt (1836)

The expedition was completed in June 1836 and the Journal of the Royal Geographical Society proclaimed it a success, stating that “everything which could reasonably have been looked for, has been accomplished” (The Journal of the Royal Geographical Society of London, Vol. 7 (1837), p. 411), while the Resident in the Persian Gulf wrote that the establishment of a permanent steam service on the Euphrates was “worthy of the deepest consideration” and suggested ways in which it could strengthen Britain’s already dominant position in the Gulf (IOR/L/MAR/C/574, ff. 342-44).  Further explorations were carried out in the 1840s, but in 1854 preparations began for the building of the Suez Canal and an official overland route between the Mediterranean and the Gulf never became a reality.