Tucked into an Indian diary of Charlotte, Lady Canning was an unexpected find - a playbill advertising the entertainments offered at Astley’s Royal Amphitheatre during Christmas week 1857.  If you had sixpence to spare, you could find yourself in the Upper Gallery, while for a guinea you could be in the comfort of one of the boxes.  On offer was a ‘National Military Spectacle’ called ‘Storming and Capture of Delhi’.  A series of scenes in three acts, it was described as being ‘…founded upon the present events in India’.  The play covered the outbreak of the Indian Uprising or ‘Indian Mutiny’, the relief of the siege of Cawnpore (Kanpur) and its violent aftermath, and finally the assault on Delhi and its capture by British troops.  These events played out from May to September 1857, Delhi being retaken by the British on 20 September.  The play opened in London on 25 November 1857, scarcely two months later.  Portraying current events, it served as both popular entertainment and dramatized news production. 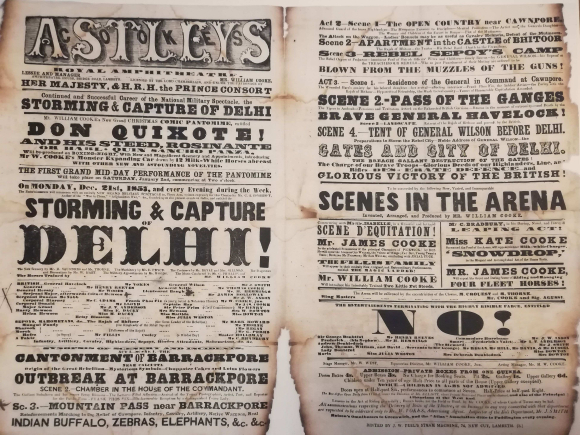 Situated on Westminster Bridge Road, Lambeth, Astley’s opened in the 1770s.  It burned down and was rebuilt three times – in 1794, 1803 and again in 1841.  The space was enormous with a pit, gallery and viewing boxes, and a large circular arena in addition to a stage.  It was rather like a cross between a circus and a theatre. The  Illustrated London News in 1843 described the newly rebuilt Astley’s as an octagonal structure, richly decorated with columns, hangings, chandeliers, and a stage measuring 75 x 101 feet.  No expense had been spared on its rebuilding.  Circus proprietor William Cooke leased Astley’s from 1853 to 1860 and revived its popularity; the venue became famous for equestrian displays, including adaptations of Macbeth and Richard III performed on horseback. 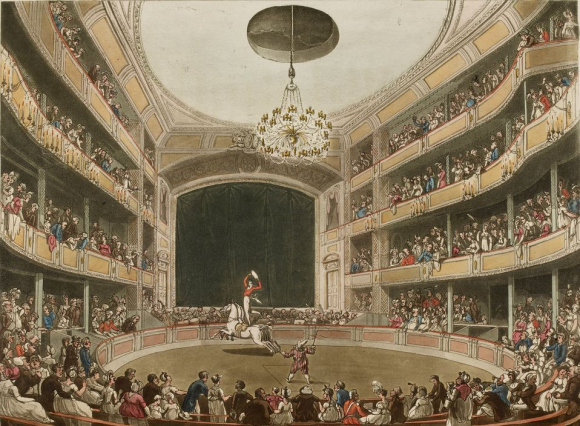 ‘Storming and Capture of Delhi’ was written by the dramatist Charles A. Somerset, about whom very little is known.  In the 1861 census he is 66, unmarried, and an ‘Author Dramatic’, originally from Bath.  He is one of several lodgers at 2 Pitt Street, Southwark.  This is almost certainly the same Charles Somerset living in Devonshire Street, Lambeth in 1841, who is described as a ‘Writer’.  He had been writing for the stage since the 1820s; a check of the British Library catalogue reveals a wide repertoire from historical drama (Bonaparte in Egypt), comic operetta (Good Night Monsieur Pantalon), farce (The electric telegraph, or, the fast man in a fix) to pantomime (King Blusterbubble, and the demon ogre).

The spectacle on show during the winter of 1857-58 had all the hallmarks of an Astley’s production.  There were live animals, including troupes of trained horses as well as real Indian buffalo, zebra and elephants.  According to the reviews, ‘The compiler of the drama…has not encumbered the action with a complex plot or sentimental story but given a rapid succession of stirring scenes…’.   These included daring chases on horseback, stage combat including firing musket rounds, and comic interludes such as British troopers donning women’s bonnets to confuse the enemy.  There was even a romantic sub-plot involving Miss Mathilda, a General’s daughter, and Frank Phos Fix, an artist and volunteer Hussar.

In addition to individual items like the ‘Storming of Delhi’ playbill, the British Library holds a significant collection of approximately 234,000 playbills dating from the 1730s to the 1950s. Some have been digitised, and many are being made available via the Into the Spotlight project.

Further Reading:
Mss Eur F699/2/2/2: Indian Journals of Charlotte Canning.  The Astley’s playbill has been housed in a fascicule at Mss Eur F699/2/2/2/6.
Add MS 52969 K 'The storming and capture of Dehli', grand military spectacle in three acts. Licence sent 24 November 1857 for performance at Astley's Royal Amphitheatre 23 November 1857.  Cover signed William Cook, lessee and manager, and W. West, stage manager.  Songs included in MS. LCO Day Book Add. 53073 records the stipulation that all oaths be omitted as well as the names of General Wheeler and his daughter ff. 29. (Part of THE LORD CHAMBERLAIN'S PLAYS AND DAY-BOOKS; 1851-1899, 1824-1903. Add MS 52929-53708: [1851-1899]).
The play was reviewed in The Morning Advertiser on 26 November 1857.  It was also advertised as still being on at Astley’s in The Globe, 26 January 1858.
Charles A. Somerset’s plays can be found amongst the Pettingell manuscripts at the University of Kent, while Somerset’s letters to TP Cooke are held by the V&A Department of Theatre and Performance.