In early 19th century Oman, one of the Imam of Muscat’s trusted advisors was a woman – his paternal aunt, Mūzah bint Aḥmad Āl Bū Sa‘īd.

9 April 1832: Muscat was in disarray.  Reuben Aslan, the East India Company’s agent in the city, wrote to his superior, Samuel Hennell, Resident in the Persian Gulf, that citizens on the city’s outskirts had retreated inside its walls for protection, the markets had closed and the people were ‘in the greatest terror’ (IOR/F/4/1435/56726, f. 242v).  The Imam of Muscat, Sayyid Sa‘īd bin Sulṭān Āl Bū Sa‘īd, was in East Africa furthering his colonial projects in Zanzibar.  He had left three relatives in charge.  One of them – Sa‘ūd bin ‘Alī bin Sa‘īd, Shaikh of Barka – had imprisoned the other two in his fort at Barka.  Together with the Shaikh of Al Suwayq, Shaikh Sa‘ūd then launched an attempted takeover of the Imam’s territories along the Al Bāţinah coast, situated to the west of Muscat. 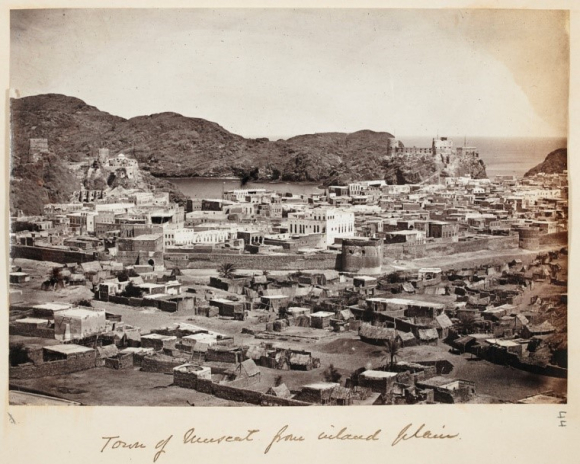 Amongst this chaos, the Imam’s respected and influential aunt, Mūzah, took charge as interim leader.  On receiving the news of her great nephews’ imprisonment, Mūzah took action, requesting British support and writing an urgent letter to the Imam.  She began recruiting troops and reinforcing Muscat’s defences by distributing gunpowder and shot to the city’s fortresses.  She dispatched three envoys to Barka to find out more information on Shaikh Sa‘ūd’s plans and sent reinforcements to Muḥammad bin Sālim Āl Bū Sa‘īd’s fort at Masnaah, against which Shaikh Sa‘ūd and the Shaikh of Al Suwayq had launched a siege.

Within a few weeks, Mūzah’s actions bore fruit.  The EIC’s agent in Muscat provided updates in further letters on 24 and 27 April, writing that Shaikh Sa‘ūd’s siege at Masnaah had proved unsuccessful and that, thanks to ‘…the courage of the Imaum’s [sic] aunt, Muscat is in perfect peace’ (IOR/F/4/1435/56727, f 545v).

Whilst the eventful spring of 1832 is recorded in the IOR/F/4 papers, further research shows that this was not Mūzah’s first time defending her family’s territory and control.  Mūzah first became well known thanks to her role in helping to secure power for Sayyid Sa‘īd and his brother Salim in 1806 (Ibn Ruzayq, Arab.D.490, pp. 266-283).  Emilie Ruete, Sayyid Sa‘īd’s daughter, went further and referred to Mūzah as his regent for the first few years of his reign (Ruete, pp. 159-162).  In fact, Ruete claimed that Sayyid Sa‘īd was able to develop his colonies in East Africa because of the peaceful realm in Oman which Mūzah handed over to him (Ruete, p. 162).  The revenue from East Africa, including the Indian Ocean Slave Trade, formed a significant part of Sayyid Sa‘īd’s wealth and power.

Primary sources which mention Mūzah are sparse and, to date, little else has been written about her in English or Arabic.  Projects, like the BLQFP, which provide the time and resources for cataloguing to an intermediate level, help influential women who operated in patriarchal societies, such as Mūzah, to be brought to light.

Further reading:
London, British Library, 'Affairs of the Persian Gulf. Vol: 3'. IOR/F/4/1399/55442
London, British Library, ‘Affairs of the Persian Gulf. Vol:I’. IOR/F/4/1435/56726
Emilie Ruete, Memoirs of an Arabian princess, an autobiography (New York: D. Appleton and company, 1888)
The Runaway Princess
Hamid ibn Muhammad ibn Ruzayq, History of the imams and seyyids of ‘Oman by Salil-ibn-Razik, from A.D. 661-1856; translated from the original Arabic, and edited with notes, appendices, and an introduction, continuing the history down to 1870, trans. by George Percy Badger F.R.G.S. (London: Printed for the Hakluyt Society, 1871) Arab.D.490