Abul Kalam Azad was born on 11 November 1888 in Mecca, the youngest child of Sheikh Khairuddin Dehlavi, an Islamic scholar, and the niece of the mufti of Medina.  In 1898, the family moved to Calcutta.  Azad was given a traditional Indo-Islamic education at home by his father, which included Arabic, Persian and Urdu, study of the Quran and the Hadith, Islamic philosophy and theology, and mathematics.  He also began to explore the new religious and political ideas in the wider Arab world. 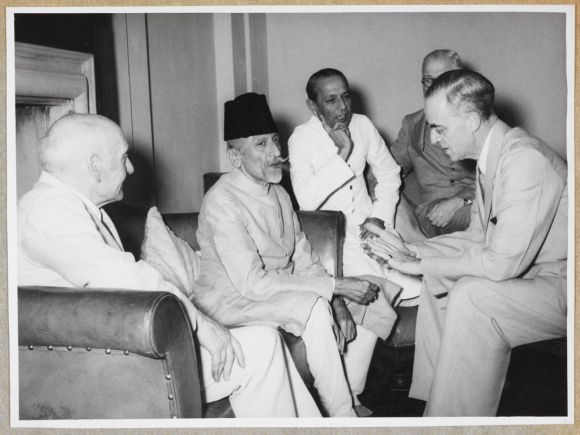 Azad began a career in journalism writing for Urdu newspapers, and in 1906 he became editor of the Amritsar newspaper Vakil, the best known Urdu newspaper of the time.  He introduced literary and historical features, and wrote about events in Turkey and the Middle East.  In 1912, he founded the journal al-Hilal in order to more widely raise the cause of Indian Muslims.  Al-Hilal was politically and religiously radical, and was closed by the Bengal Government in 1915.  In 1916, he was interned in Ranchi and detained there until the end of 1919.  During his internment he began work on a translation and commentary on the Koran, called Tarjuman al-Quran.  He was imprisoned again in 1921, along with other nationalist leaders.

In 1923, Azad was elected president of the special session of the National Congress held in Delhi to decide the future course of nationalist action, where he called for Hindu-Muslim co-operation.  He was again imprisoned in 1930 after taking part in Gandhi’s disobedience movement.

In 1940 he was elected President of Congress, a post he held until 1946, and was fully involved in the constitutional negotiations leading up to Independence.  He strove to bring Muslim and Hindu together and vehemently opposed partition.  The principal of a united India was fundamental to Azad’s political ideology, and he resolutely held to it throughout the negotiations.  He believed that there was no harm in deferring freedom by a few years if partition could be avoided.  In India Wins Freedom [p.205] he describes how at the beginning of 1947 he tried to persuade Gandhi of this:

'I pleaded with him that the present state of affairs might be allowed to continue for two years.  De facto power was already in Indian hands and if the de jure transfer was delayed for two years, this might enable Congress and the League to come to a settlement….I realised that if a decision was taken now, partition was inevitable but a better solution might emerge after a year or two.  Gandhi did not reject my suggestion but neither did he indicate any enthusiasm for it'.

In the final years of his life, Azad held the post of Minister for Education, and dictated a political memoir called India Wins Freedom.  He died in Delhi on 22 February 1958.  The India Office Records at the British Library holds many files relating to this fascinating and influential man.

Government of Bengal refusal of a passport to Mr M A K Azad to proceed to Europe for medical treatment: Parliamentary question, July 1924, shelfmark IOR/L/PJ/6/1882, File 2692.

Correspondence between Jinnah, Nehru, Azad, Prasad, and others, 1938-1939, shelfmark IOR Neg 10762/4 (in the papers of Quaid-i-Azam Mahomed Ali Jinnah, leader of Muslim League in India and founder of Pakistan).